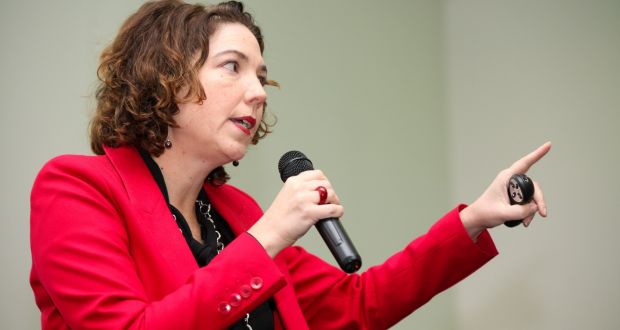 Writer Christine Armstrong: delivered a feisty speech that sought to “blow up the bullsh*t” that says women can have it all – a perfect home life as well as a perfect career. photograph: maxwells

The integration into the mainstream business and corporate world of ethical or moral issues, such as green concerns or the drive for workplace equality, tends to follow a similar arc over time.

At first, the noise around the issue is driven by committed activists who are the subject of eye-rolls from the mainstream. Later, there is serious debate, and entrenched opposition from within the mainstream starts to unwind. Soon after this, some companies may spy an opportunity for themselves in embracing the argument. Finally, the argument is broadly accepted on its own merits across the board.

Green issues, for example, trod this path from the 1980s to now. In 1984, when the mainstream considered worries about the environment to be half a yard from lunacy, Friends Provident launched one of the first green investment products. It was quickly dubbed the “Brazil Fund”, because it was said that you’d have to be nuts to invest in it.

But by the 1990s, the debate over environmental damage from industrial activity had gone fully mainstream. By the Noughties, companies were “greenwashing”, or using their pro-environment credentials as a means of promoting themselves. Now, the danger of climate change due to industry is rarely disputed in a serious way. The argument is now only about how to combat it. The arc is complete.

In Ireland, the issue of workplace gender equality currently straddles the third and the fourth (and final) phases of the arc, that space between where companies see opportunity for themselves and where most of the arguments that may once have been disputed are now generally accepted.

Ahead of the implementation of mandatory gender pay gap reporting for larger companies next year, some Irish businesses are already utilising the issue as part of their self-promotion.

Ireland has a gender pay gap – the difference in average earnings of men and women – of 13.9 per cent. This is entirely separate to the issue of different pay between genders for equal work, which is already illegal.

Neither company was obliged to publish the figure. But it was clearly advantageous for them to do so, and one wonders if they would have bothered had their percentages been in double figures.

The lower average pay of women is now widely accepted as being symptomatic of a system of work that was not set up with their interests to the fore. Just a few years ago, it mightn’t have been controversial to dispute strands of that argument. Now, it is a part of the mainstream.

The extent to which this is the case was evident on Wednesday at the first annual #Workequal conference of the Dublin branch of workplace equality advocacy group, Dress for Success, which was founded by designer and businesswoman, Sonya Lennon.

The conference heard from high-profile advocates for workplace gender equality, such as Iceland-based campaigner Tatjana Latinovic and British writer, Christine Armstrong. Latinovic spoke of the importance of building a grassroots movement and how women in Iceland have gone on general strike six times over equality issues.

Acceptance comes in the ordinary. Much of the debate in favour of workplace gender equality has been won by its advocates

Armstrong, meanwhile, delivered a feisty speech that sought to “blow up the bullsh*t” that says women can have it all – a perfect home life as well as a perfect career. The system is not set up that way for working mothers, she argued. It’s more difficult.

Latinovic and Armstrong were inspirational and entertaining contributors. But they are both campaigners and high-profile advocates in this field. You would expect them to have something to say. This is their turf.

Pat Naughton, the head of human resources at ESB, spoke of putting 200 of the company’s managers through an inclusive leadership programme. Without blinking, he argued that the manner in which the economy is set up, in terms of expected working hours and the demands of employers, has made it harder for women to achieve equal outcomes to men.

He suggested that meetings be held at hours convenient for family life, and that flexible working be the norm. Meanwhile, Shane Dempsey, the top lobbyist for the Construction Industry Federation of Ireland, described the efforts underway within the building industry to open it up to women. Only about 1 per cent of workers on building sites are female, he acknowledged.

What Dempsey and Naughton were arguing was not remarkable. It was mostly common sense. What was more striking was that they didn’t look or sound out of place: two men representing corners of the economy where gender issues might have previously been ignored, talking at a conference tailored for women.

Acceptance comes in the ordinary. Much of the debate in favour of workplace gender equality has been won by its advocates. It is fully accepted within the mainstream, and the arc of the argument is virtually complete.

But that’s only half the battle for equality advocates. The debate will now focus on how to fix it. As the environmentalists may attest, that it is a whole new struggle.

- Now that businessman Michael Fetherston has agreed a deal to buy the five-star K Club golf resort from Michael Smurfit for close to €70 million, it remains to be seen what he will do with it. The resort lost €3.7 million last year. Something has to change.

Fetherston has other interests in the hospitality industry, but he is primarily known as an operator of nursing homes through the TLC group, which has five facilities in the greater Dublin area.

In the weeks leading up to the finalisation of the K Club deal, Fetherston started an overhaul of the corporate structure of his nursing homes group. He has set up a number of new entities, into which it appears that each of the nursing homes will be placed. He didn’t respond to a query about whether he plans to sell any of them to fund the K Club deal.

He also didn’t respond to a query about whether he will look to develop any property for older or retired people on the grounds of the K Club, which might be one way for him to turn a buck on the deal.

- As reported a few weeks ago in The Irish Times, IDA Ireland has spent close to €10 million buying a 211-acre site on the outskirts of Newbridge that could be suitable for one of its so-called “mega-clients”.

The site sits adjacent to a new €100 million Lidl logistics centre, as well as a separate 48-acre site nearby that Lidl had used until now, and which it plans to offload. The retailer says it is close to finalising a sale.

It would seem to make sense for the IDA to buy the old Lidl logistics site and marry it to the 211 acres it has just bought, giving it even more space with which to make its pitch to large industrial investors. But apparently the State agency is not in the frame.