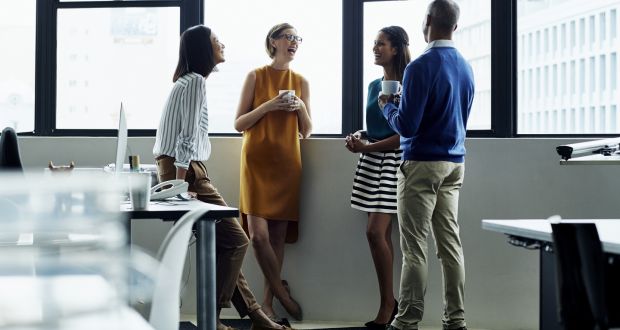 A woman I met at a networking event told me that she values the 5pm Friday drink in her City office. That small ritual helps everyone feel part of corporate culture

Back in the almost-forgotten days before an intense heatwave took hold in Britain, I was somehow persuaded to visit a recently closed factory in a London suburb to see an arts project called “A real job is to make something”. So far, so unappealing.

It turned out to be extraordinarily powerful and I have been thinking about it ever since.

Inside the vast space of George Myristis’s former Wearite clothing factory, there were videos, installations and events inspired by this place and the work done here. One artist had made angular pipes, re-imaginings of industrial detritus. They lay, awkwardly, on the expanse of shop floor. It was clever but this sort of installation is familiar to anyone who has ever visited an art gallery.

What was different, though, was that the organisers, Margot Bannerman and Anna Hart of Air studio, had asked Mr Myristis and some of the 100 machinists who worked for him – many of them for the entire 40 years that the factory was open – to record their memories of the place.

In the empty space where giant looms once produced duvets and sleeping bags and the staff cut out and sewed English country wear (waxed jackets, quilted gilets and the like), we put on headphones and listened to the voices of men and (mostly) women from all over the world who had come together in aptly-named Seven Sisters.

Their testimonies demonstrated over and over again that Mr Myristis, as owner-manager of the factory, had created something more than the sum of its physical parts and products. He and his staff had built a community. Immersed in the process (“a real job”) of making things, the workers here shared their lives, too.

Experiencing that lost world made me realise that going back to basics, cherishing the unheralded things that keep us together rather than push us apart, seems suddenly important in a polarised and poisonous political climate. We live inside filter bubbles. Work may be the only place where we meet – and manage – people who are Not Like Us.

Mr Myristis, a Greek Cypriot, employed people from the island’s Turkish and Greek communities (others came from Ireland, Somalia, Ghana and many more places). In his corner of London, bonded by common interest, everyone shared things, whether that was a lunch or family joys and sorrows. Businesses are communities, too – and they are missed when they are gone.

There is a lot of management prose written about how work must provide “purpose”, “passion” and “engagement”. That theory is fine and important, but I never saw it embodied until I entered this rundown building next to a busy roundabout in unglamorous outer London.

Those of us who still count ourselves lucky – and engaged – in our corporate lives can and should supplement those abstract words with more grounded ones: normality, routine and kindness. These are the things that matter, and managers and business leaders have an important part to play in reinforcing the reassuring patterns of the workplace. Disrupt your industries, if that is what you are in business to do, but do not disrupt the bonds that tie employees, however loose or unspoken they may be. Everyone wants connection: WeWork has built a global empire on individuals’ desire to rent desks in a shared space.

Small kindnesses count. Buy tea, cake or fruit for colleagues (but, as a friend reminds me, do not expect anything in return. She was regularly sent off on an expensive coffee run by a highly paid manager who never paid her back).

A woman I met at a networking event told me that she values the 5pm Friday drink in her City office. It signals the end of the week, and managers lead by example. Everyone stops work, gathers and talks. Then they leave at 5.30pm. Some staff go on to the pub, others choose not to, but that small ritual helps everyone feel part of corporate culture.

Next door to the old Wearite factory there is a huge linen and bedding shop. It is magnificent – the biggest one I have ever entered. It even stocks old-fashioned flannel sheets, hard to find, but so comforting in winter. Mr Myristis appeared and we shook his hand. He is over 80 and has no intention of retiring. The factory has been sold, but his shop is open and he still has another factory in Cyprus.

As my friend and I paid, the women working in the shop talked animatedly to one another, to us, to Mr Myristis. The community of work is a powerful thing. Let’s not underestimate it. – Copyright The Financial Times Limited 2018