Will business respond to the rising tide of climate change? 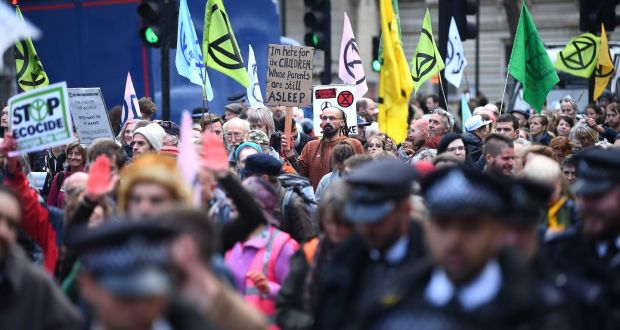 An Extinction Rebellion protest in London. A barricade was set up outside the BBC to demand more coverage of climate change

I was sitting at my desk one rainy afternoon last week when the streets outside suddenly filled with a large gaggle of noisy Extinction Rebellion protesters.

For a few exciting moments it looked as if they might have been heading for the Financial Times’s front door. Perhaps they were about to form a barricade like the one they set up a few days earlier outside the BBC to demand more coverage of climate change.

Alas, they were not. Watching them trudge on past us in the drizzle I was struck by two things: how warm and dry my office was and how hard it was to imagine working life changing to meet the rising demands of climate activists.

Yet change it must, at least in the UK, which this year became the first G20 country to write into law a target to bring greenhouse gas emissions down to net zero by 2050.

That goal might sound a safe 30 years away, but the scale of change needed to strip emissions out of our daily lives is so huge it means no home or office will be untouched and action will need to start soon.

Signs of what lies ahead for the workplace are already starting to emerge, especially when it comes to work travel, and while some developments sound seriously attractive, others will not inspire joy.

Last week’s climate protests coincided with the release of a report from Imperial College London that sets out what individual people – and companies – can do to help meet the 2050 target.

You might have heard about its most contentious suggestions: a ban on frequent-flyer programmes and an air miles levy that would target the 15 per cent of the population responsible for 70 per cent of all flights. Both ideas would hit business travellers who account for about 19 per cent of UK flights.

To stop them flying at all the report recommends some form of financial support for organisations with a lot of frequently flying staff to help them install video conference systems or “telepresence suites” to replace physical meetings. It also suggests funding for meeting venues to help them host conferences that could be broadcast around the world.

I can think of quite a few conferences I would have preferred to watch from my desk rather than in person. Equally, some of my most important work contacts have been made on the sidelines of big international conferences that thousands of people have flown to from around the world. I would miss them if they went.

Other climate workplace moves are far more cheering. Next month a British charity is due to formally launch something called Climate Perks, a scheme that encourages companies to give workers at least two days off a year so they can take a train, bus or boat instead of a plane on holiday.

Organisers say 25 employers have signed up for a two-year trial of the scheme and they are in talks with 150 more, including a law firm, an architectural practice and a big construction group. Participants will be monitored by Deloitte to see what does and does not work. Some companies have already introduced the measure, to the unsurprising pleasure of staff.

“It’s fantastic,” said Flossie Boyd, a 24-year-old campaigner at a non-profit public relations start-up called Power for People. She used her extra leave to take a 14.5 hour train journey from London to Lake Como, Italy, for a holiday last month.

Her boss, Steve Shaw, told me he is heading to Germany by train this week, and likes the scheme so much he is thinking of extending the amount of paid leave and perhaps compensating staff who pay more for rail tickets than a plane fare.

His company is tiny. Would bigger organisations be willing to join up? One of the largest to do it so far is MTR Express, a Swedish train company with 120 staff that has been testing the extra leave since last year. There are no plans to end it, says chief commercial officer Peder Osterkamp, who used it to go to Russia.

A train company has an obvious interest in a slow-travel scheme. The plan might work best for companies eager to lure younger workers. It would be hopeless without good rail links.

But as the push to cut emissions gathers pace, I suspect it is the start of a greener way of working that will start to affect a lot of us faster than we think. – Copyright The Financial Times Limited 2019