Wild Geese: ‘San Francisco is where the work is but so much has changed’ 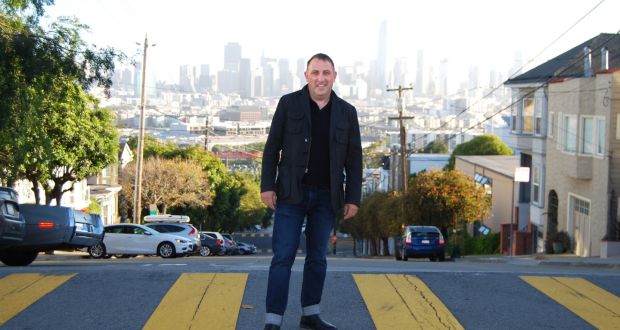 Seamus McAteer in San Francisco: “It’s not a place you want to move to, unless you are very serious about working in the tech sector. It’s not as diverse as it once was which is a shame.”

A lot has happened for Seamus McAteer since leaving Ireland almost 30 years ago to work on a buffalo ranch on the Hawaiian island of Kauai during his college years.

He’s become an entrepreneur and senior executive, a member of several boards, and has built and sold several companies in the online and mobile sectors while making frequent appearances on television and radio commenting on technology issues for CNN, Fox News, NPR and TechTV.

He specialises in areas including market research, mobile applications and content, digital media, telecommunications, speech technology and AI amongst others.

“But I kind of fell into it,” he admits. “I went back to college upon my return from Kauai, completing a degree in marketing at the Dublin Institute of Technology. After finishing in 1991, I went to the United States, spending time in New York before heading west.”

McAteer got a green card as part of the diversity lottery programme and ended up in San Francisco.

“At that time, a lot of people were just hanging around pontificating on their next move. Silicon Valley wasn’t what it is now and people could enjoy west coast living without having to work their fingers to the bone, so they were good times. I had a room for $300 a month and was enjoying life.”

“The work suited me but after a while I didn’t want to do construction work anymore. So I got a job with Stanford Research Institute’s Business Intelligence Centre, building coverage of mobile data and handheld computing sectors.”

It was meant to be an “in between job”; he ended up turning it into a career as an analyst.

“I was working for Jupiter Communications from 1998 to 2001, as director and research fellow, where I headed Jupiter’s coverage of new technologies and services when the dot.com bubble burst,” he says.

Next thing, I found myself in New York discussing the future of the internet with some of the world’s top global publications like the Wall Street Journal and the New York Times, USA Today.”

It was a great platform for McAteer, who was to use his expertise to start his own company, the Zelas Group in 2001.

“I built the company into a 10 person organisation, a leading boutique advisory services firm focused on mobile data.”

In 2004, he founded MMetrics, a venture-backed mobile audience measurement firm that became currency for the sector in US and Europe.

“I oversaw the launch and day-to-day management of several industry benchmark research products and spearheaded international expansion, while establishing a London office and secured a partnership in China.”

In 2008, he sold the company to Comscore, a US media measurement and analytics company.

“I was on honeymoon in Donegal when the deal went through and remember sending a fax from a community centre in Donegal, because they needed a wet signature on the documents. I’ll be forever thankful to them.”

Since then he’s grown and sold several companies and helped others sell their companies.

“I had a number of successful transactions in quick succession, and became a board member of and an adviser to numerous startups in the Bay Area for the next decade.”

Last year, he got involved with a company called AISence Inc, which transforms how the world organises voice conversations.

“We have an awesome founding team to bring next generation of conversational speech recognition technology to the market.”

McAteer, who works as a general manager, says the company developed a programme called Otter, which can be used to capture voice transformation and turn it into digestible text.

He says he relishes working with the company, as start-ups are are “hard work”.

“It’s an early stage company, but very well financed and I’m the only person on the team who doesn’t have an advanced degree in computer science.”

McAteer has lived and worked in San Francisco and the Bay area since the 1990s, and has seen a lot of change.

“San Francisco is where the work is, but so much has changed. No one ‘hangs out’ here anymore like they used to. So you don’t get as many Irish people coming over to chill for a couple of years after school or college, which they did back then.”

He says people are there with a purpose.

“Rents are high. It used to be a legal, media and tourism centre, with a port, less blue collar but now it’s mostly tech here,” he says.

“So it’s not a place you want to move to, unless you are very serious about working in the tech sector. It’s not as diverse as it once was which is a shame. I think every city needs diversity and it is in danger of losing that.”

McAteer says a lot of friends of his now live in Oakland, because of high rents in the city and lack of convenient schools.

“I’m still in the city, which is fortunate, considering the real estate issues here.”

Despite the downsides, San Francisco and the Bay Area is still welcoming to people, especially Irish people, and it’s a great place to start a company, he adds. “You don’t have to be established at home to come here. You can find a network and make it happen.”

There’s a big cohort of people here who are looking for deals, they will help you, but you also need to be able to hustle, he says.

“People know how to structure deals here, they know how to get the talent for your company, if you need it. You won’t get that anywhere else in the world. They’ll also find the capital for you.”

But, warns McAteer, don’t bother coming to find your feet and see what happens.

“Those days, unfortunately, are over in San Francisco.”