Wild Geese: Out of Dublin and into Monrovia 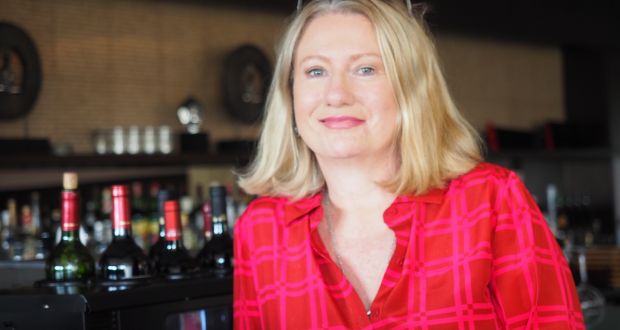 Anna O’hUadhaigh-Bsaibes: ‘It’s not for everyone. This holiday is for adventurers’

Back in the early 1990s, war-torn Liberia would not have been an obvious location to set up a hotel. But, then, Dublin native Anna O’hUadhaigh-Bsaibes is no ordinary hotelier. In 1993, she and husband Chawki opened Monrovia’s Mamba Point Hotel, an establishment that has gone down in legend among the war reporters who visited during the country’s most tumultuous times.

Anna first arrived in Liberia as a reluctant holidaymaker. It was 1987 and she and her mother went to spend Christmas with her sister, who was living with her diplomat husband in Monrovia, then one of west Africa’s liveliest cities.

There, she met Chawki and, as she puts it, “love just hit me on the head when I least expected it”.

She was 23 years old, but already had an entrepreneurial streak, having run a student cafe back home. Chawki, who is of Lebanese stock, was running his uncle’s restaurant.

Within a year, the newly-married couple had set up a small pizzeria, delivering to the families of the US diplomatic corps. “Everything was fast because, you know, you don’t waste time,”she says.

War broke out in 1989. The following year, Anna was forced to leave her husband behind, boarding the last flight from the capital with her son Alexi, then 18 months old. Sick with worry, she returned to Dublin, enduring months of uncertainty when communications were cut off in Liberia.

One day, Chawki called out of the blue, having fled the country in a convoy bound for Sierra Leone. “They were trying times, very disturbing. I was a nervous wreck,” she says.

The couple were reunited in Dublin. For a while, they thought they were never going back. But, by 1991, the situation had calmed down and they returned to a different Liberia, the scars of war now very much in evidence.

“The city had changed and everything looked really grim,” says Anna. “Before, they grew fruit and vegetables, but now there was nothing. It never recovered properly.”

She wasn’t afraid. Locals welcomed them back with open arms, thankful to see foreigners coming back into the country, she says. By 1992, she and Chawki had opened a travel agency, selling plane tickets to the small international community that still remained in the country.

A year later, they set up Mamba Point Hotel in what had once been the residence of the American chargé d’affaires. “We’ve always been entrepreneurs and we’ve always had an appetite for embarking on new ventures,” she says.

The hotel became a hub for war reporters. They would hang out in the lobby, which took on the feel of a private club, Anna playing hostess. Visitors were reassured by the presence of her second son Nikky. (Due to the lack of schools in Liberia, Alexi was now being educated in Lebanon, where he lived with his grandmother.)

“Our guests felt safe,” she says. “Our family photo was up on the wall. I called it the Royal Family. And people would say: ‘We’re home, in a home away from home.’”

But, by 1996, Monrovia had again become too dangerous. Anna and Nikky were evacuated by the US Navy Seals to neighbouring Sierra Leone. As they took off in the military helicopter, amid the whistling of rocket-propelled grenades, she looked down at a city plunged into darkness, the only lights emanating from the hotel.

“I was crying all the way to Freetown. I thought I would never see Chawki again,” she says. Within a year, however, she was back.

In 2003, the war came to an end. “People were tired. Everybody wanted peace,” says Anna.

By then, the UN had arrived, with contingents of Swedish and Irish troops, and the country began to feel secure again. In the years that followed, there was a sense of optimism, as adventurous tourists began trickling into the country, attracted by the surfing and the country’s exotic wildlife. Then, in 2014, Ebola struck.

“It was one step forward and 10 steps back,” says Anna. “It was a different kind of war. It was actually terrifying.”

She decided to stay, mainly to maintain morale among staff. But, as the epidemic raged, she was eventually forced to return to Ireland. It was the first time she’d experienced trauma, the disease constantly at the back of her mind.

“Every minute, it was on the news. People didn’t like to hear that I’d come from Liberia,” she says.

Now, with war and disease thankfully in the past, Anna is hopeful that economic recovery is on the way. Mamba Point, which has hosted VIP guests such as Bono and former Irish presidents Mary McAleese and Mary Robinson, has now expanded to 61 rooms, with three on-site restaurants serving Japanese, Indian and Italian cuisine.

“Everything we made, we put the money right back in again,” she says. “We’re proud of what we’ve done. It’s a brand we created ourselves.”

The country needs investors and tourists, she says. Liberia, which was established by freed slaves from America in the 19th century, has a fascinating history and a lot to offer.

“It’s not for everyone. This holiday is for adventurers,” says the once-reluctant holidaymaker who went on to have the biggest adventure of them all.