Wild Geese: ‘Malta is home and I’ve had an incredible career opportunity’ 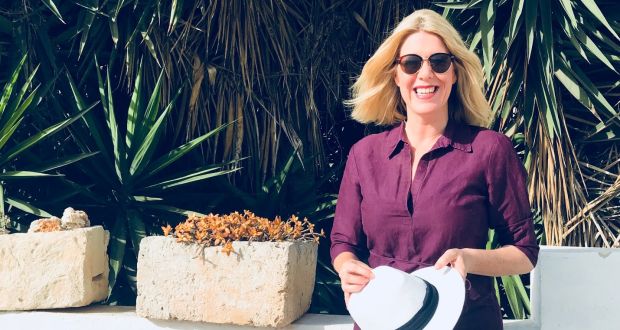 Lisa Carson: “Malta is open for business so check it out. Rents aren’t as high as Dublin and there are opportunities if you put in the work.”

Moving to Malta during the height of the recession in 2012 proved to offer much more than a lifeline for Lisa Carson. It turned out to be a great career move.

“I left Ireland with my then family of four after hitting numerous walls. My now husband had worked in Malta previously and had connections there, so we thought we’d sit out the recession.

“Five years later, this place is home and I’ve had an incredible career opportunity, one I wouldn’t have gotten in Ireland.”

Originally from Belfast, Carson left for Dublin in 1993 after finishing school to study textile design at the National College of Art and Design, and subsequently went on to study interior design in Griffith College, Dublin.

“I kind of segued from my original choice, but it all amalgamated beautifully later on,” she says.

While working in pubs during her college years, Carson got into designing pub interiors and venues.

“It was the early Noughties and Dublin was kicking off. Sponsors and advertisers had loads of money to throw around, so I set up my own company called Room Service and was designing sets for festivals like Witness, precursor to Oxegen and large-scale corporate events.”

Her skills brought her across the world to Argentina and across the Mediterranean, where she designed sets for parties and events.

“I was putting all this work in, only for it to be ripped down the next day, so I decided to go back to redesigning pubs and worked with the Whelans group in Dublin for several years, before emigrating to Australia in 2007,” she says.

“Things were starting to cool down in Ireland, and pubs weren’t spending money on refurbishments, so I got a great opportunity to work with an Irish pub company, McNally, in Sydney.”

It wasn’t to last too long, however before recession hit in Australia in 2009, and Carson returned home again.

“It’s as though I was being followed by the recession, because, when I returned to Ireland to have a baby, things were even worse than when I left.”

After having two children in quick succession, Carson and her family moved to Malta.

“We arrived in June 2012 and I had a job with Daaa Haus, a global network of artists, designers and architects by August 2012. I hadn’t done design for a while, so I stayed up all night designing a website and dusting of my skills to get an interview.’

Carson says that, shortly afterwards, her husband was offered a position in Latvia, which he was forced to take, as work in Malta was thin on the ground.

“So there I was pregnant with my third child, with my husband living abroad and working full time on diverse design projects. I was pretty busy.”

The company, which had four designers at the time was to grow over the next five years and now employs 50 designers with new offices in Milan and Ragusa, in Italy.

“Since Malta is enjoying somewhat of a boom, business has blossomed too and we’ve taken on huge restoration projects, growing the company across Italy and Europe.”

Carson has been working on top hotels in the city including the Cugo Gran Macina, in the Grand Harbour, the Cumberland Hotel, in Valletta and the president’s palace, which has garnered much attention across the global interior design world. Privately she has worked on some of the biggest palazzo restoration projects on the island.

“We’ve been nominated for numerous awards. It was unexpected, as I had three children and thought I would mostly be looking after them. But the opportunity was great and, unlike in Ireland, childcare is amazing here, so my kids were well looked after.”

Carson says you get free childcare in Malta from 7am to 5pm if required, free quality healthcare and doctors visits.

“And then you get seven months of sunshine thrown in. The downside is, you don’t get paid as much, but the benefits outweigh the negatives. We have a pool and a quality of life here that we wouldn’t have back home.”

When Carson’s husband came back after two years to get a job in Malta, everything fell into place and they’ve since managed to “nail the work-life balance”.

“I’m soon going to be working with Daaa Haus on a contract basis, so I have more time for the family. I’m glad I did the early on graft, because now it allows me to pursue projects of my own and now we have a comfortable life.”

She says the first year they we moved to Malta was like a honeymoon, but the next years were challenging.

“We put in the graft and now we’re reaping the fruits of our labour.”

Carson says she obviously misses Ireland, particularly her great circle of friends, but they have gotten to know the small community of Irish people in Malta.

“At the moment, Malta is open for business, so check it out. Rents aren’t as high as Dublin, and there are opportunities if you put in the work.”

Carson has no plan to return home, even though her experience means she could land a job anywhere.

“For now, we’re happy. The kids love it, we’ve made some good friends and we’re going to stay here.”