Wild Geese: Making it big via sport in Luxembourg 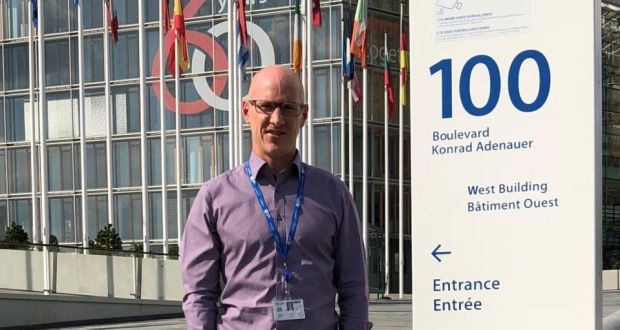 Stephen Knowles outside the European Investment Bank in Luxembourg: “Any weekend I can be in Germany, Belgium or France in less than 30 minutes.”

Sport was the lure to keeping Stephen Knowles in Luxembourg when he first went for what he intended as a one-year career move. A keen rugby player and sailor from his early years growing up on the Howth peninsula in Dublin, he found sport an ideal way to integrate into his new home and has since represented Luxembourg in rugby internationally.

“I’ve over 20 caps for Luxembourg and [have] been on many good tours representing Luxembourg to other countries, including Russia and Azerbaijan.”

It’s all a long way from St Paul’s College in Raheny, and Trinity College, where he graduated with a degree in BESS (finance) in 1996 before going on to do an MSc in IT in Loughborough College in England.

“I left Ireland in 1999, I was already working in the banking/finance sector with Commerzbank in Dublin but I was interested to travel and Luxembourg had a buoyant job market at the time, particularly in the funds industry.”

Knowles initially thought he’d stay for a year, maximum, but life quickly became a lot of fun, mainly due to getting involved in a multicultural rugby environment.

During his first 10 years in Luxembourg, Knowles worked in US bank State Street before moving to Clearstream – a German bank – and then to Japanese bank Nomura.

He spent some time with Came Consulting, an Irish fund company, which led him to freelancing before taking on his present position as head of the project and change management unit at the European Investment Bank (EIB) – all the time continuing to pursue professional education qualifications in project management and risk management.

“I started working for the European Investment Bank – the European Union’s bank – in 2011. It is the only bank owned by and representing the interests of the European Union member states. It provides finance and expertise for sustainable investment projects that contribute to EU policy objectives [including in Ireland].

More than 90 per cent of activity is in Europe but the bank is also a big investor around the world.”

Initially, Knowles worked on risk management-related projects; now, he heads up an internal project and change management team focused on information management. At the moment, digitalisation is a big driving force.

He has found that, in Luxembourg, you need to be culturally sensitive to language habits especially. His team comprises French, Belgian, Turkish and Serbian people.

“My boss is German and I have close peers from all over the EU. Most people speak three languages at least – although not me. The working language is English but it’s not like speaking English in Ireland. One must speak more clearly, more simply and more slowly to get the message across and understood effectively. I have become aware not to use colloquial Irish language or terms.”

Talking more naturally with Irish “isms” is one of the best things he enjoys about coming back to Ireland to visit.

For Knowles, sport was a big part of integration into living in Luxembourg. His advice to anyone considering a move is to get involved in sports or clubs, learn the local language and be open-minded.

“Enjoy the differences and push yourself outside your comfort zone in order to move forward.”

The chambers of commerce locally offer good connection points to new Diaspora in Luxembourg and Knowles found the pubs were a good place to go to meet people.

“Expats have no immediate family with them so we help each other all the time. It is normally easy to meet people and integrate, as all expats were once the new person who had just arrived.”

Knowles warns that the opportunities he enjoyed in his mid-20s are not as plentiful for the new generation of emigrants, as the EU is going through interesting times right now.

“This is sad. However, many opportunities will remain for those who want them across the EU, and I am sure in the UK and US also. I am positive that the changes we see taking place in the EU and US, although worrying, will bring new opportunities which you can take advantage of if you are ready. The Irish are normally good at that.”

Proximity to other countries is an added bonus to living in the Benelux countries. “Any weekend I can be in Germany, Belgium or France in less than 30 minutes.” The climate is hotter than Ireland in summer and colder in winter. During the winter it’s easy to enjoy sports such as skiing, as the Alps are within driving distance.

Knowles has found Luxembourg to be an affluent country, offering many benefits to anyone raising a family. “I’ve a girl aged 10 and boy aged seven. Luxembourg is safe and small, with a reasonable commute to work. The children learn multiple languages in school and the recreational infrastructure and facilities are impressive.”

Knowles manages to get back to Ireland frequently on holiday to visit family and friends but he insists his future is in Luxembourg, as his children are firmly ensconced in the school system and there are many good reasons to stay.

“Although the EU is going through a challenging time I enjoy working for the EIB, where tangible social and economic benefits are created.”