Wild Geese: Making it big in the ‘thank you’ business 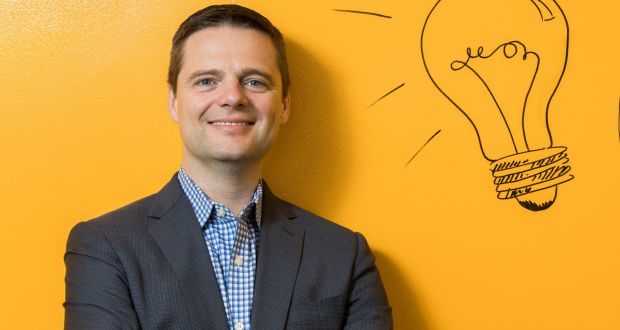 “We help companies to give recognition and express gratitude to employees,” says expat Eric Mosley “Both the giver and the receiver are ‘lifted’ by the process and this generates a positive, can do, working environment.” Photograph: Naoise Culhane

It was the basic human need for recognition that inspired Dubliner Eric Mosley to co-found the social employee recognition company Globoforce in 1999. Now an international business with a $500 million turnover, Globoforce is headquartered in Dublin and Framingham, Massachusetts, and employs about 500 people.

Four million employees in 150 countries use its cloud-based recognition software including a string of Fortune 500 companies.

“We’re in the ‘thank you’ business,” Mosley says. “We help companies to give recognition and express gratitude to employees. Both the giver and the receiver are ‘lifted’ by the process and this generates a positive, can do, working environment.”

“A lot of our customers are headquartered in the US so it made sense to base myself in our largest market and, at that time, employee-centric practices were also more part of the fabric of American corporate culture than anywhere else,” he says. “But even with video conferencing and social media, getting on that plane with the kids was still gut wrenching.

“The United States is a melting pot of cultures and it didn’t take long to find our place. However, many of our friends are Irish expats. The laughter just flows with the Irish and we are at our most relaxed with them.”

Before Globoforce, Mosley worked as a software engineer and internet architect often on projects for large companies. “They had local recognition programmes but they were very old school. The employee-of-the-month gets to pick something from a catalogue sort of thing,” he says.

“It was a cost that never really added anything to companies’ culture. Around this time, internet technology was taking off and it became obvious that there was an opportunity to leverage web technologies to create a frictionless means by which employees could freely recognise one another and that this could have a real cultural impact.

“There’s no cynicism because people don’t have to do it. Big companies now understand that they need to encourage participation and the amazing thing is that once people start, they do it freely because it’s just a natural human thing to do.”

When he’s not working, Mosley coaches kids soccer and enjoys hiking, skiing and playing the guitar.

“Technically, I’m based in Massachusetts but really, it’s on planes, trains and automobiles. What I love about the US is the seasons. Living in New England means hot summers and biting cold winters. There are few things as exciting as a big snow storm and then I get to ski.”

Cultural differences have not been an issue when doing business in the US, he says, because Globoforce is in “the positivity business and, when you strip away background, cultural nuance and personality, you are left with a human being that needs to be respected and responds to positivity. However, working abroad has given me the opportunity to play a part in shaping the workplace cultures of some of the most admired organisations in the world.

“If I had stayed in Ireland, we would not have grown so large. The US market is enormous and the opportunity is never exhausted. Companies are always looking for new ways to improve their overall performance because they want to beat the competition.”

Mosley’s co-founder at Globoforce in the very early days was Eddie Reynolds, whom he met while working for CSK Software. “Eddie was at retirement age and I was a young, aggressive, entrepreneur but we got together and that’s how it all started,” he says.

“When I look back over the last 10 years, I can see a change of attitude in the workplace. It’s not all to do with millennials, although they’re certainly a factor, but you have young people joining the workforce who were raised on social media and are much more culturally honest about their core human needs. This is undoubtedly having an influence.”

On the current business environment in the US, Mosley says, “There’s been a shift in the tone although, from a business perspective, it hasn’t changed. The US economy is steadily growing every year. But there’s no doubt that the tone of the national conversation has become darker and, because of what we do, Globoforce has become even more relevant.”

Globoforce’s customer list includes Cisco, Eaton, LinkedIn, Biogen, Merck, and P&G. However, Mosley stresses that while the company’s early sweet spot was companies with more than 10,000 employees, today it also works with much smaller companies. This has created new opportunities in Ireland, Britain and mainland Europe.

“What I enjoy most about my job is helping some of the world’s most established businesses achieve greater humanity within their organisations,” says Mosley whose company has created the WorkHuman conference, an annual event held in the US and attended by large numbers of HR executives and senior managers.

“Our WorkHuman movement has really exploded in the last few years and is now bigger than us. The aim is to ensure that employees are treated as valued members of a team not as assets to organisational success.”

As a techie, it’s not surprising that Mosley thinks young Irish people should be focusing their sights on careers in technology.

“Where the world is going now there is an infinite demand for software talent in particular,” he says. “Dublin is a hotbed for technology talent and we’ve been able to hire fantastic software engineers and developers in our Dublin office, which serves as our innovation hub and is integral to the future success of our business.”