Wild Geese: From Shelbourne FC to meetings at US Federal Reserve 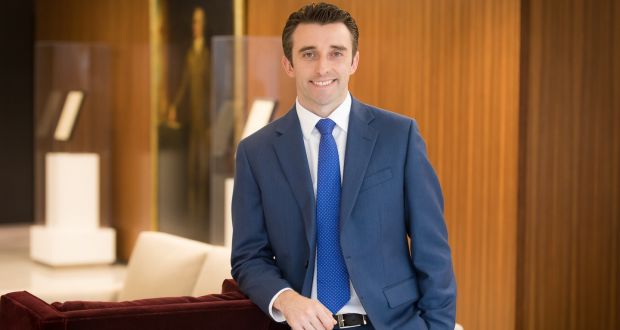 Eric Moore says that his career has been a combination of drive, determination and the many mentors he has had.

“When I was six years old, we went to the World Cup in Italy. To get one ticket would have been lucky, so for my father to get seven was pretty amazing. It was a once-in-a-lifetime experience being there for the famous penalty shootout with Romania and the quarter final against Italy. We spent time in Rome and had an audience with the pope.”

Balbriggan native Eric Moore caught the soccer bug early after his trip to Italia ’90. He played locally with Glebe North, a successful youth team, and went on to play for Shelbourne FC, a club dear to his family’s heart, aged 17.

In 2003 Moore was selected to play for Felician University  in  Rutherford, New Jersey. It was an opportunity that would change the course of his life and afford him opportunities he believes he might never have had in Ireland.

As vice-president, chief administration office, broker-dealer services at Bank of New York Mellon, Moore has spent all his adult life in the United States. In conversation he seems considered yet engaging and grateful for his quick rise through the ranks of the bank, where he was recently awarded a BNY Mellon Star Award 2017.

Moore may be humble in conversation. Yet it is clear that, to have such a clearly defined career path so young, he must be both ambitious and keen enough to seize opportunity when it arises.

“It has been said to me that I am a bit of an ‘old soul’ or have an ‘old head on young shoulders’. All my determination I learned from my dad and mom. My dad ran his own business and my mom worked in healthcare as a care assistant,” says Moore.

At Felician University, Moore studied business administration with a concentration in accounting on an athletic and academic scholarship.

“The US model is that there is as much attention placed on both the academic and the sports side of things,” he explains. “You have to maintain levels of grades and of performance, so you have to have a lot of discipline. You’ve got to be burning on both cylinders.”

At university, the college recognised Moore’s maturity. “The university gave me a lot of opportunity when I was there. I was on the soccer team but I also had the keys to oversee the dorms as the resident director in partnership with the college,” says Moore.

He did an internship with BYN Mellon in his third year in university. It was the summer of 2006.

“I was with the broker services division and, when I was leaving, they offered me a permanent position on graduating,” he says.

Having graduated with honours, Moore moved to a full-time position at the global headquarters of BNY Mellon which, up until September 2015, was at No. 1 Wall Street.

“For a young boy from Balbriggan to have his first job out of college and be on Wall Street – it was a moment I won’t forget,” he says. “It was a great place to start my career and now I’ve been 10 years with the firm it’s been a great place to work.”

To date, he has spent seven years in New York and three years in London where he was vice-president and chief administration officer of broker-dealer services for Europe and Asia Pacific. In that role, he was responsible for the strategic and day-to-day business dealing with finance, legal, risk, compliance and human resource partners for all broker-dealer services initiatives within the bank’s European and APAC regions.

In 2016, he returned to New York to take up the more senior position of vice-president within the global chief administration office of broker-dealer services and to “apply what [I’d] learned in Europe to the US business”.

“On my return to New York, our business was growing at a rapid pace and we created a new subsidiary of BNY Mellon, which does not happen often in our organisation. With our history of being the oldest operating bank in the US, we continue to evolve with our clients and the market and have just created a new entity. It was a great opportunity for me to apply my own administrative skills from a business perspective and work closely with our legal, risk, compliance and finance partners to create that new entity.”

Most recently, Moore was honoured by the bank with a BNY Mellon Star Award.

“For 2017 they recognised me out of 52,000 staff globally. It’s the highest honour that the bank can give an employee. The fact that they took me on as an intern, showed me very many opportunities over 10 years and then chose to recognise me in my 10th year is brilliant,” he says.

He still lives in Rutherford, New Jersey, eight miles from Manhattan, a picturesque place with tree-lined streets and views of the city. “I’ve been living here for about 14 years. It’s a friendly place and I’m quite happy here,” says Moore who is a member of the Concern Worldwide Winter Ball Committee in New York.

Moore says that his career has been a combination of drive, determination and the many mentors he’s had. “Timing has also been key,” he says. “I believe that luck is when opportunity meets preparedness. I have had very unique opportunities in my career and I was prepared to take them.”