Wild Geese: a love of horses took a Galway student to Kentucky 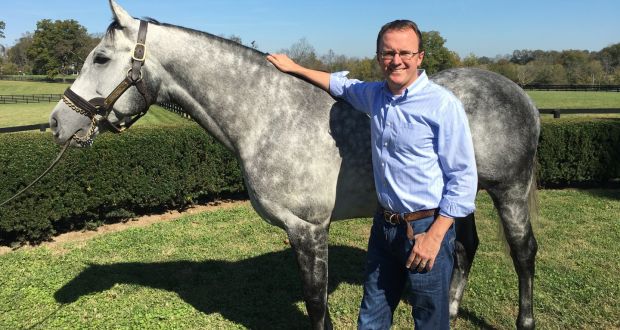 Cormac Breathnach: “My parents tell me that some of my first words were the names of racehorses and stallions in the 1970s, so for some reason horses have always been my thing”

Kentucky is along way from home in Galway, but a love of horses drew Cormac Breathnach from afar.

Born in Renmore, Breathnach attended St Joseph’s College, where his father, Máirtín, was a teacher and vice-principal. “From there I studied biotechnology at UCG. It was a brand new course then – I think I was part of the second class. It suited my interests, but it also gave me the opportunity to travel after the third year.”

In the summer of 1995, Breathnach did a research internship at Alltech, near Lexington, Kentucky, where Dr Pearse Lyons, who recently passed away, founded and developed an animal feed and nutrition company.

“While spending that summer there I learned about the Maxwell H Gluck equine research centre at the University of Kentucky in Lexington.”

The Irish are well represented at the Gluck centre. Dublin-born Peter Timoney was the director at the time. His brother John Timoney and Tom Tobin were also on faculty, and remain so today.

When Breathnach returned home to finish his biotech BSc degree, he decided to move back to Lexington in the summer of 1996 to go to graduate school at the Gluck centre. He has never left.

“My parents tell me that some of my first words were the names of racehorses and stallions in the 1970s, so for some reason horses have always been my thing. For a long time I had toyed with becoming a veterinarian, but the biotechnology degree made more sense when the time came.”

While in post-doctoral study, Breathnach realised that academic life wasn’t getting him close enough to horses. So on finishing his doctorate he spent two years working as an independent bloodstock agent.

“In 2009 I was hired to sell stallion nominations and provide bloodstock services at Adena Springs at a palatial farm in Paris, Kentucky. I spent eight years there working with some of the industry’s top stallions. Last summer the opportunity arose to join Airdrie Stud in Midway, Kentucky, in the same capacity.”

Airdrie is owned by former Kentucky governor Brereton Jones, who is admired and esteemed both as a horseman and as a politician. “I have been friends with the team at Airdrie for some time, and I and couldn’t pass up the chance to work here,” Breathnach says.

His main responsibility is to recruit mares to the Airdrie stallions. “Stallion ownership is a massive investment, often seven and sometimes eight figures, and selling nominations to breeders is essential to recoup the investment but also to give the stallions the best chance to be successful. The thoroughbred market [bloodstock auction prices as well as stud fees for stallions] fluctuates quite a bit in response to the global economy.”

In broad terms, capitalism is far more prevalent in US culture. Cost-effectiveness and the bottom line drive decision-making anywhere, but especially in the US. A large proportion of people are business owners or have some side business interests.

In Breathnach’s opinion, Lexington has a lot in common with Ireland. “The region was settled in large part by Irish and Scots. And there is a large and vibrant Irish community here, almost exclusively working in the horse industry. It’s an easy place to settle and call home once you get here.

“There’s a great deal of opportunity here for young people who want to work with horses. In fact, there’s a worker shortage, partly because the jobs tend not to appeal to the American workforce, and also because there are increasing restrictions on immigrant worker visas.”

Visa accessibility is an increasing problem, and recent tightening of the seasonal worker visa (H-1/H-2) programme is putting a pinch on employers in the agriculture sector, including the thoroughbred horse industry.

The positive is that there is always good opportunity for advancement in the horse industry for young people who love horses and work hard. The difficulty is securing the paperwork to allow that to happen.

Breathnach has not been involved in any formal networking bodies in Kentucky. “You don’t need to in Lexington! The Irish community here is large and very active. An Irishman from Athenry referred me to the position at Adena Springs nearly 10 years ago.”

“It can rain a lot and the rolling land can look very similar, more so at that time of year. Having had a lot of Irish settlers the heritage here has a lot of Irish influence. Bluegrass music has its roots in Irish session music, etc. When I moved here [back when we had phone books] I noticed that there were several ‘Brannocks’ in it.”

Married to a girl from Virginia, with a seven-year-old child, Breathnach has settled in Kentucky. “This is home now and I’m not planning any big changes, but there is still nowhere like Ireland and the people in it.”