Why jokes among colleagues are needed now more than ever 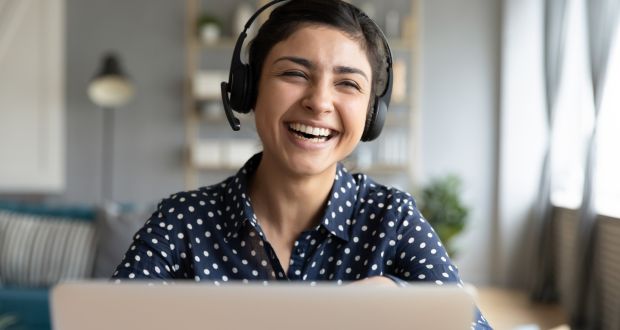 ‘People at work say they have fun on morning team calls ... but these isolated pockets of online fun are no match for the way jokes hurtle around an office full of people.’ Photograph: iStock

Ihave been lucky to have worked with a lot of clever, funny people and I thought of them all last week as I watched Boris Johnson make an online speech to his Conservative Party’s virtual annual conference.

There he stood, hands air-jabbing, hair skew-whiff, as he grumbled about having to talk to a camera in a lifeless London studio instead of the noisy hall in Birmingham that would have been the venue if it weren’t for Covid-19.

Not to fear, though. All would soon be back to cheek-by-jowl normality, he said. “Hairdressers will no longer look as though they’re handling radioactive isotopes” and we would not need to “greet each other by touching elbows as in some giant national version of the birdie dance”.

The UK prime minister has always understood how much we appreciate a leader unafraid to joke. Few rulers match his unwavering zest for a zinger.

Yet watching his speech, with its awkward, heavy silences where crowd laughter might have been, I felt a stab of loss. It was a reminder that the pandemic has stolen a basic ingredient from politics, as well as ordinary working life: humour.

It is not that wit and cheer are entirely absent in the work-from-home day. As I type, a friend embroiled in a dull online conference has mailed a tweet of a baby being bored to sleep that made me laugh aloud. (You have to watch it with the sound on.)

People at work say they have fun on morning team calls. Apparently some FT Slack channels are borderline hysterical.

I do not doubt a word of this, but I also feel these isolated pockets of online fun are no match for the way jokes hurtle around an office full of people.

Take the Sydney newspaper I once worked for. Had we all been typing from home, we would not have heard what happened when its penthouse-dwelling editor was shown a photo of a passenger jet that had made an emergency landing after a bit of its roof peeled off midflight like a sardine can lid.

“Oh,” he said. “So that’s what economy looks like.” Nor would we have heard what the same man muttered the day the newsroom filled with the bawl of a crying baby: “Where’s Herod when you need him?”

You may say that’s a good thing. But the point is, a punchline has a lot more punch when heard by lots of people at once. That is impossible when the audience is split among hundreds of far-flung workers’ homes.

Does this matter? Perhaps, considering the number of executives I keep meeting who worry about how quickly remote workers are losing a sense of connection to their company – especially younger staff and newcomers. Humour must be part of the answer.

A new book by two Stanford University lecturers called Humour, Seriously offers some more recent – if unnerving – evidence to back up these findings.

Data from 166 countries shows that from around the time we enter the workforce, we suffer a stunning loss of humour that we do not start to regain until we retire. The number of times we laugh or smile each day starts to plummet around the time we hit 23.

Apparently the average 40-year-old takes 10 weeks to laugh as much as a four-year-old does in a single day (up to 300 times). Yet a sense of humour is of far more use to the 40-year-old.

A jolting 98 per cent of executive leaders prefer employees who can laugh, surveys show, and 84 per cent think those with a sense of humour do better work.

Happily, the research also shows you do not need to “be funny” to benefit. Apparently it is more important to be able to signal you have a sense of fun by, say, smiling or laughing at jokes.

For some of us, this is just as well. The authors have an online quiz that assesses what type of humour you have. As soon as I’d done it, I scurried downstairs to find my other half. “I’ve just done a test on my sense of humour,” I told him. “Good,” he said. “Did you find one?” – Copyright The Financial Times Limited 2020