What Warren Buffett and Dale Carnegie can teach business about dissent 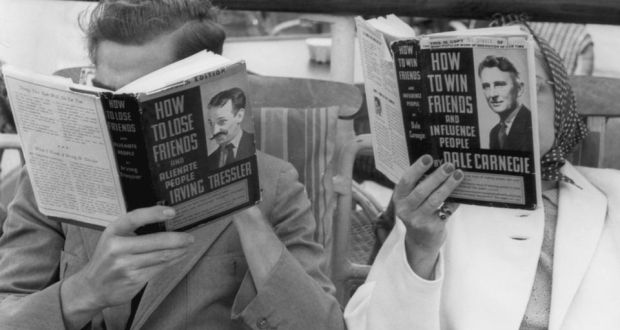 How to Win Friends and Influence People: not everyone agrees with Dale Carnegie, but he knew the value of persuasion. Photograph: Frederic Hamilton/Hulton/Getty

By the time you read this I will be on my way to jail. Not to be detained at her majesty’s pleasure but to argue about current affairs as part of a debating competition for prisoners at an English prison, Winson Green, in Birmingham.

With politics grown partisan and the UK divided on existential questions such as Brexit, you might think a set-to about what is in the news would be dangerous enough without setting the punch-up behind bars. But at the event last year, the first prison initiative organised by Debating Matters, an education charity, I was told, ruefully, that learning to reason and persuade was valuable to prisoners, whose disputes too often and too quickly turn nonverbal.

As a lifelong lover of disagreement I am looking forward to it. But the prevailing ill temper swirling around UK politics, coupled with recent criticism of companies that suppress dissent, have left me wondering about the value we give to argument in public life, and the limits we place on dissent in business.

Perhaps the two worlds could learn from one another. In the UK general election this year young voters rebuked their elders and betters at the ballot box. Shrieking at the electorate about the opposition Labour Party’s unfitness for office failed to deliver Theresa May her expected landslide victory or even a House of Commons majority.

The Remain campaign’s tactic in 2016 of trying to terrify the electorate into voting to stay in the European Union backfired. President Donald Trump’s electoral win showed us how Americans are also sick of having their views dictated to them. Politics should adopt urgently one of the basic tenets of business wisdom.

In How to Win Friends and Influence People, Dale Carnegie’s classic 1936 self-help book, perhaps the most thought-provoking chapter is entitled “You Can’t Win An Argument”. Haranguing opponents or doubters, trying to prove them wrong, only entrenches their views, he claims, quoting a pioneer of self-improvement, Benjamin Franklin: “If you argue and rankle and contradict, you may achieve a victory sometimes; but it will be an empty victory because you will never get your opponent’s goodwill.”

Business-minded online readers tend to react badly to Carnegie: “boring and not useful” was comment beneath a recent article about him. Others dismiss his great work as a manual for insincerity. But since discovering a battered copy a few months ago, I stick, sometimes in the face of ridicule, to the conviction that it contains profound wisdom.

If you do not believe me, then take it from Warren Buffett: the Sage of Omaha proudly displayed a 1952 certificate of participation in a Carnegie leadership course on his office wall – and credited it with changing his life.

It is hard not to conclude that much recent political discourse on both sides of the Atlantic fails Carnegie’s tests. I have developed repetitive strain injury from deleting the endless press releases from pro- and anti-Brexit campaigns, and political parties, each with the hyperbole and attacks on opponents turned up to the maximum. United States politics has been reduced to a festival of invective. No one seeks to persuade. What has happened to politics if it no longer realises it needs to, in Carnegie’s phrase, “influence people”?

Companies are hierarchies, not democracies, despite contemporary blather about ‘stakeholder buy-in’

The business world, however, has often appeared to err in the other direction. This is for good reason: companies are hierarchies, not democracies (despite contemporary blather about “stakeholder buy-in”). But some companies display an unhealthy reluctance to allow internal debate and dissent.

Perhaps one of the most heartening reactions to a Google engineer’s recent memo complaining about his employer’s diversity policy was that many commentators, especially those who disagreed with James Damore’s complaints, defended his right to hold divergent views – and, indeed, to discuss them.

Howard Schultz, executive chairman of Starbucks, levelled an even more damaging implied criticism at his colleagues in the corporate world last week, by writing in the Financial Times that businesses confronted with the “American carnage” of the Trump era have a civic duty to speak up and challenge, for example, racist ideology. The alternative “meek” response would be a moral failure, he – yes – argued.

In journalism, dissent and criticism are valued (by and large) because a free flow of ideas makes the product better. But how would someone like me – scrappy, obnoxiously opinionated – fare in corporate culture? Not well, I fear. Perhaps I will get on better in prison.