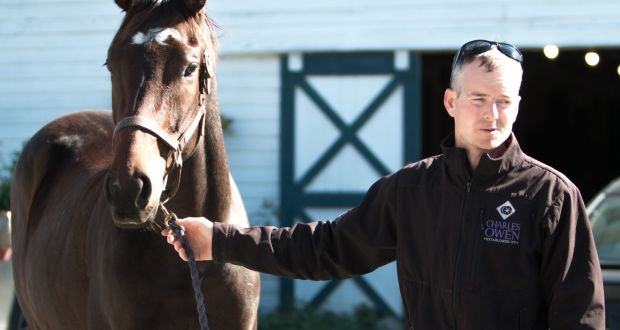 Jeff Murphy: “Being a boss has certainly been a learning curve.”

“It was absolutely the making of me, coming over here, I wasn’t behaving. It was as simple as that and it put manners on me.”

Wexford-born Jeff Murphy has a habit of being in the right place at the right time. His move to Virginia in the United States came at just the right time to launch his career as a jockey. Now, it appears that launching his horse training business couldn’t have been better timed either.

“Imagine If I’d behaved myself at Willie Mullins’s [yard]. I definitely paid attention, I just didn’t behave myself and that’s a fact,” says Murphy, who started riding as an amateur in Ireland before a spell Stateside working for Irish trainer Jimmy Day.

“I rode well. I just wasn’t the most punctual in the mornings because I was burning the candle at both ends.

“You grow up fast when you’re not going anywhere. I was back here for three months and Jimmy said come back and be my stable jockey. I couldn’t get a ride in a point-to-point in Ireland and all of a sudden I’m offered all the rides in the yard.

“I went home to Ireland for two months that summer and came back in the autumn and I rode two winners under rules.”

Sixteen years later, and now a well-established steeplechase jockey, Murphy, who also works for trainer Larry Curtis, has started his own business, Jeff Murphy Training Stable LLC, and holds his own trainer’s licence.

The move to his new career was a natural progression for the skilled horseman, well the equine part anyway.

“Being a boss has certainly been a learning curve, keeping everybody happy and trying not to be too harsh when you see the lads skiving, because I’ve been there myself. I was the biggest skiver ever. Anyone I worked for in Ireland would tell you that but we always got the work done. But when you’re paying a salary, you’re like, ‘Come on lads, get it done.’

“As a jockey, you basically roll to the races, say hello to all the people on the way in and think you’re a big fella. And now you roll up in dirty jeans, leading a horse and carrying all the buckets in with you. You know you’re actually doing some work. It is hard, unless you have good help; I have good help.”

A large part of Murphy’s operation is breaking horses, essentially starting their education from handling to being ridden, all done at a barn he rents from one of his owners, Brian Farrell, at Ellerslie Farm.

In another stroke of luck, a bonus scheme has been introduced for racehorses bred, born, trained or sired in Virginia. With great timing, it came as Murphy was launching his business.

The incentives are to encourage racehorses back into Virginia. Those eligible are given a 25 per cent bonus on prize money won in races in the mid-Atlantic region.

There are various different schemes but one applies to horses that have lived in Virginia for six months or more. Its introduction has seen Murphy’s barn full, even with out-of-state-bred horses hoping to qualify for the bonus scheme.

“I’ve been breaking horses here for a long time, a skill I picked up from an old friend, Peter O’Leary, back home. Peter had me lying over horses from about the age of 12. Even during my lunch, while working for Padge Berry, I’d go off breaking horses with Peter.

“Over here, it’s all come from one farm, Morgan’s Ford. I used to go there every autumn and break their horses. Even people who bought horses off them are now sending me horses to break.

“A good foundation in anything is obviously important. It makes the trainer’s job a whole lot easier when they have all the steering and the stopping and they are just quiet. A quiet horse is easier to train than a horse that’s nervous.

“I’m lucky I’m in a pretty affluent area and it is definitely a horse area. There is more and more breeding going on. Knowing that bonus schemes were going on, I definitely hustled a bit for it and I made sure I had as many stables available to me as I could. I rented a little bit more land as well, I had to make room to have the livestock.”

Murphy moved to Virginia in 2002, and now has two sons Cillian (2) and Niall (6). He is very much settled in the US with no intention of coming home.

“Don’t get me wrong, I miss home and Ireland is home. In two more years I can go for citizenship. The kids are both dual citizens. I will definitely do it, if it all went belly up with Trump or something, we could kick on home but we could always come back again.”