Video conferencing is a lifeline in pandemic, but don’t overdo it 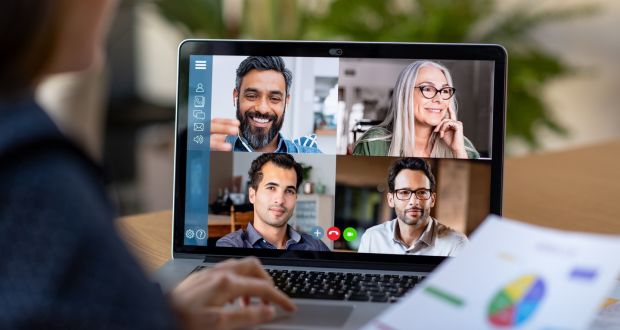 A straw poll of home workers found that up to five video calls a day was the norm, with some people doing twice that number. Photograph: iStock

The siege mentality thrust upon us by coronavirus is playing games with people’s heads. Many are complaining of brain fog, sluggishness and forgetfulness, and feel exhausted from juggling work and domestic commitments without the usual demarcation lines.

Overnight, homes have been turned into extended workplaces and video conferencing sessions have become an integral part of many people’s days.

The Zooms of this world have rapidly become a vital personal and economic lifeline, but video calls have their downside. They are not the easiest way of communicating at the best of times and overdoing their use, especially when a phone call or an email would suffice, is a fast way of tiring people out.

A straw poll of home workers found that up to five video calls a day was the norm, with some people doing twice that number. Employees also said managers were using video calls to check up on them more often than usual and this was beginning to grate.

One of the main reasons video calls are tiring is because they’re intense. They require prolonged focus and stillness and don’t offer any of the normal meeting room distractions of movement or personal interactions that give small but vital mental breaks.

They require participants to concentrate harder than usual to make sure they’ve understood what’s been said and virtual meetings often run over time because things have to be repeated as participants inevitably talk over each other.

It’s also almost impossible to make proper eye contact on a multi-shared screen and this creates emotional anxiety because we rely on a variety of physical cues to gauge what someone is really thinking. Not getting non-verbal feedback is a silent stressor.

Adding to the stress level is the fact that not everyone likes the format. People get antsy because they don’t feel comfortable appearing on screen, the technology doesn’t always work and poor quality picture and/or sound coupled with background noise can make the whole process unsatisfactory.

Around 40 per cent of meetings experience hardware or software issues and roughly a quarter of employees regularly call their IT department for technical help during meetings.

Face-to-face meetings have a familiar protocol that everyone is comfortable with, but there is a video conferencing etiquette that people have been slower to cotton on to. The format may feel more casual and urban myths abound about employees turning up on video calls wearing nothing but a smile, but when these calls are being used in a work setting normal business rules apply.

Highfive offers a number of pointers around good video conferencing behaviour and clothes are not optional. Other rules include not eating or chewing gum, not sitting too close to the screen, not blowing your nose in full view of the camera and not locating your screen next to noisy equipment.

Things to do include smiling, sitting up straight, tidying your appearance before the meeting starts and making sure you’re sitting in good light so people can see you.

Like any meeting, a video call benefits from having an agenda and a time limit, and just because people have nowhere to go doesn’t mean calls should be allowed run on.

In group sessions, the moderator needs to step in if one person is dominating the conversation and the usual rules of turning up on time, suitably attired and properly prepared all apply.

Spending hours on video calls is just one of the things sapping people’s energy as the pandemic restrictions bite. Letting things fall through the cracks seems to be another consequence of disrupted routines. But forgetting to answer an email or leaving something off the shopping list doesn’t mean you’re losing the plot – yet.

Even at the best of times forgetting is part of the human condition because the brain’s “normal” working memory is typically limited to a sequence of seven things. Add juggling a heavily distorted work-life balance to the mix and maybe even seven is too much of a burden for our brains right now.

The phrase The Magical Number Seven, Plus or Minus Two, was coined by George Miller in the mid-1950s and it elbowed the dominant behaviourism theory of the day to one side and launched the new research field of cognitive psychology.

Miller is considered one of the most significant experimental psychologists of the 20th century and his magical number seven was developed through research that showed humans typically got “stuck” in or around the seventh item when trying to remember random lists of things such as colours, letters, words or numbers.

If you’re bored enough to check this out, ask someone to write a list of 10 words or numbers. Read it through once and then see how many items you can remember. You’ll find you hit a wall around seven and there are plenty of erudite scientific papers that explain how most people’s brains fire and suppress clusters of neurons when trying to remember sequences.

The exception to the rule seems to be those whose memories are wired differently. For example, individuals on the autistic spectrum who can often remember sequences of items running into the hundreds.