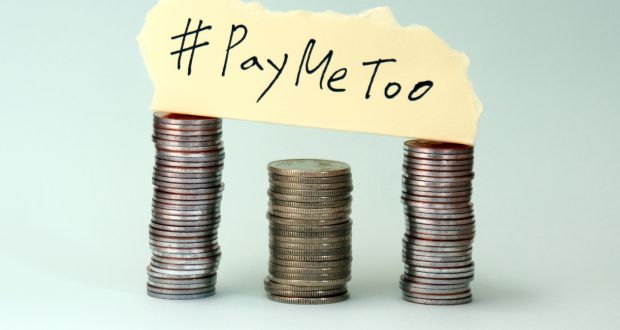 The #MeToo movement has prompted the rise of the hashtag #PayMeToo. Photograph: iStock

Two-thirds of companies worry that proposed legislation requiring them to reveal their gender pay gap could be a risk to their reputations.

Some 67 per cent of major Irish employers surveyed by consultants Mercer admitted they were concerned about the potential risk to their reputation if the differences between how they pay men and how they pay women were published.

A third of companies (34 per cent) said they feared their gender pay gap was worse than Ireland’s average gap. Based on gross hourly earnings, this stood at 13.9 per cent in 2014, according to a European Commission report.

Half of the 67 major companies, which employ more than 110,000 people between them, also said they were concerned about the potential cost of closing the gender pay gap.

Despite these fears, three-quarters (74 per cent) said they broadly supported the principle of gender pay gap reporting. Two-thirds think it will have a positive impact.

Draft legislation aimed at highlighting the gap is expected to be brought before the Oireachtas ahead of the summer recess.

However, 70 per cent of employers have yet to explore whether any gender pay bias actually exists within their companies, Mercer reports.

“It is concerning that a large majority of companies have taken no action to discover whether gender bias exists in their pay programmes,” Ms McCarthy said.

“In fact, half do not plan to conduct an equal pay audit in the next 18 months, while just under half have reviewed policies to improve gender diversity. Clearly, much work remains to be done.”

The Irish move follows similar legislation in Britain, where all companies with 250 or more employees are now obliged to annually calculate and publish their mean and median gender pay gaps for both hourly pay and bonuses. (The legislation has not been enacted in Northern Ireland. )

The push to shine a light on pay discrepancies also comes in the wake of the #MeToo movement, which saw people speak out about their personal experiences of sexual harassment and assault in the workplace. The campaign for greater pay equality has been dubbed #PayMeToo.

The proposed Irish legislation will also apply to companies with at least 250 employees, although it has been suggested that this threshold should fall to 150 employees after two years and then 50 employees one year later. Sanctions for non-compliance are expected to be be built into the Irish law.

Gender pay gaps are often the result of occupational segregation, whereby men and women tend to undertake different roles, with the “male” roles often assigned a higher value. A gender pay gap does not prove the presence of illegal pay discrimination within an organisation.

However, lawyers specialising in the area believe it is possible that greater pay transparency will lead to a new generation of legal cases once women accrue more information about how male counterparts are paid.

John Mercer, career leader at Mercer in Ireland, said the gender pay gap was “a complex area”, in which “unconscious bias” played a part.

“Companies in Ireland that wish to redress the balance and embrace the benefits of a more diverse workforce need to look beyond pay alone,” he said.

Mercer is advising employers to conduct equal pay audits, examine the career progression of female employees and review their policies in order to address any identified gender pay gaps.