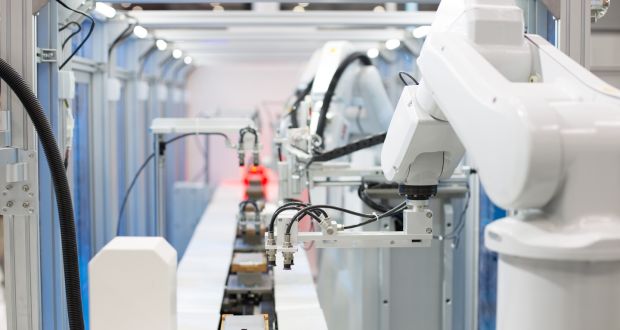 The report found process plant operators office, secretarial, administrative support and customer service jobs are among those most at risk of automation. Photograph: iStock

Two out of every five jobs across the State are at high risk of being lost to automation, according to a new report.

The study, by two University College Cork (UCC) economists, examined the towns seen as most susceptible to losing jobs due to increased automation.

Jobs highlighted as being at particular risk in the report include office, secretarial and administrative support positions; process plant operators; and jobs in agriculture and customer service.

Edgeworthstown, Co Longford is identified as the town with the highest risk from automation, while Bearna in Galway, is seen as being least vulnerable.

Malahide, Portmarnock and Skerries, all in Co Dublin, are among the towns least likely to be negatively affected by automation, according to the report. Other towns in this category include Strandhill, Co Sligo; Annacotty, Co Limerick; Greystones and Enniskerry in Co Wicklow; Ballina, Co Mayo and Maynooth, Co Kildare.

The report’s authors, Dr Frank Crowley and Justin Doran, said a number of factors safeguarded areas such as Bearna – a short drive from Salthill – from automation. These include having a larger number of highly educated young people who work in sectors that do not focus on routine-based tasks.

The jobs seen as least likely to become automated in the coming years are those in the areas of teaching and education, the arts, media and culture-related positions, health and social care, and research and development positions.

“Our study finds that the likelihood of jobs in towns being automated is explained by population differences, by education levels, age demographics, the proportion of creative occupations in the town, town size and differences in the types of industries across towns,” said Mr Crowley.

“Our results suggest that the pattern of job risk from automation across Ireland demands policy that is not one size fits all. Rather, a localised, place-based, bottom-up approach to policy intervention is needed in Ireland,” he added.

The research, which involved analysing 200 towns with a population of more than 1,500, suggests that towns at most risk need to take steps to make training and education more financially accessible to residents. It notes that grassroots movements in some local communities have already taken steps to future-proof themselves.

The authors highlight in particular the success of the Ludgate Hub in Skibbereen, Co Cork, which they said has helped to bridge the digital gap between urban and rural areas and in doing so, has ensured a new social entrepreneurial spirit locally.

The research found the average percentage of jobs at high risk of being lost to automation across the towns studied is 44.15 per cent. The lowest risk was 26.14 per cent, while the highest was 57.79 per cent.

The authors said towns with a population of fewer than 5,000 or more than 10,000 are less exposed to automation.

“This suggests that mid-sized towns may not benefit from the critical mass required to be less exposed and perhaps are not niche enough to have the benefit from being small and distinct,” the study found.

It also noted that it is “not surprising” that creative occupations are particularly resilient to automation.

“They have been identified as a crucial pillar for the resilience of economies in the face of impending technological disruption,” it said.