Time to clear out the clutter in your workplace 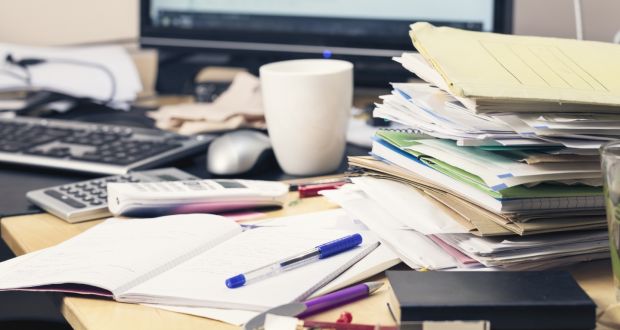 There are two kinds of clutter. The stuff in your head and the stuff that’s grown like rampant ivy to take over your working environment. It’s the desk-piled-high kind of clutter that concerns us here.

Cluttered workplaces are not good for productivity, according to Napo (the US-based National Association of Professional Organisers). It has studied the phenomenon and says that 80 per cent of office clutter is due to disorganisation not to lack of space.

Trying to work amid clutter is frustrating and it wastes time because you can’t find things. The Americans are very good a quantifying factors that affect productivity, and research from the US suggests that the average worker spends roughly a week a year looking for lost or misplaced items.

The other reason clutter is frowned upon is because breaking off to search for a document, an email or a phone number is distracting. It interrupts your brain’s flow and focus, and slows down the rate at which you can process information.

Before we go any further, it has to be said that there are horses for courses. Some people can only function amid chaos, and there is ample evidence that creativity may flourish better in a more fluid environment. Let’s not forget Archimedes had his big moment in the bath tub.

But for most mere mortals, a cluttered working environment does us no favours and can even have a negative impact on your promotional prospects as messy desks can send the wrong message to an employer.

Our brains generally don’t like dealing with clutter and neuroscientists have spent a lot of time looking at how we handle what they call “multiple stimuli in the visual field”.

A study from Princeton University Neuroscience Institute (Interactions of Top-Down and Bottom-Up Mechanisms in Human Visual Cortex by Beck & Kastner) shows that, where there is clutter, there is competition as the different elements vie for “neural representation” or in layman’s terms, your attention.

The more extensive the clutter, the “noisier” this clamour which makes it difficult to filter information, move between tasks and maintain your train of thought.

The researchers used MRI scans to look at how the brain responds to organised and disorganised stimuli and and the impact this has on how well tasks are performed. It turns out that clutter is distracting, it wears us down, it makes us irritable and less productive.

By contrast, a clutter-free environment enhances focus and efficiency, and allows us to deal with information more effectively.

Stress is increasingly being identified by Irish workers as a trigger for mental health issues and, while clutter may seem innocent enough, it can be an insidious contributor to the problem. Mess can cause stress because our minds go into overdrive coping with stimuli that are often extraneous to the task in hand.

Clutter makes it hard to relax, it creates anxiety around not being able to find things or taking too long to do so and, when you can’t see over the top of the pile, it’s hard to switch off and consider a days’ work done.

Unless you’re a naturally tidy and organised person, getting to grips with decluttering is a bit like learning to work lists – it’s an ongoing process that requires constant small investments of time to keep it on track.

The positive side of filling a big black bag is that clutter is one of the easiest of life’s stressors to fix – unless of course you’re a hoarder in which case that’s a whole other story.

But assuming your clutter is psychologically unencumbered, then an hour spent chucking things into the bin is therapeutic and time well spent.

Clearing the clutter: how to tackle the problem

– Divide your desk into “war” zones and set yourself the task of tackling even one small zone a day.

– Don’t add to the problem by simply moving stuff from the old pile into a new “to keep” pile. Instead take half an hour to create colour-coded files either virtual or real where items can be stored for easy retrieval and systematically put things into those files as you clear.

– File don’t pile: be vigilant about filing things you need as you go, whether that’s electronically or physically. Don’t leave them on your desk or desktop to mount up.

– Create designated spaces for items you use all the time and get into the good habit of keeping them there.

– Take a minute at the time to add new email addresses or phone numbers to your contacts list instead of scribbling them on a piece of paper that gets buried and you have to spend time searching for.

– Create a pending folder to move stuff off your desktop and keep everything related to immediate work in hand in one place.

– Reduce the paper mountain. If a piece of paper lands on your desk – read it then file it or bin it.

– Tidy your desk before you go home. It draws a line under the day and means you’re not returning to mess.

– Procrastination is the enemy. He who hesitates hoardes.