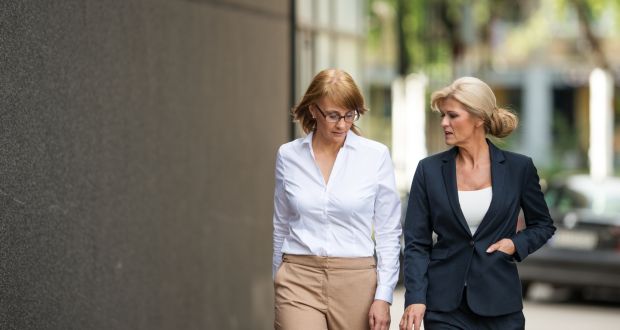 Gallup’s findings suggested that ‘having a best friend at work was a more powerful indicator of workplace outcomes than simply having a friend or even a good friend.’ Photograph: iStock

My best friend left the Financial Times a few weeks ago. She wanted to leave, and her departure, after a long notice period, was expected. But it came as no less of a blow. She was lightened and excited by her new horizons. I was left behind. And I was very sad.

My family were taken aback by such angst. I am not given to big displays of emotion. “What are you, 14? Get over it,” was my daughter’s critical assessment.

But it was hard to “get over it”. After 17 years I had to find a way to be at work without my friend. I had barely arrived at the FT before I became friends with Sarah. Our friendship grew from working on the same team to having lunch when we had both moved on, then to seeing each other outside work. Over the years our talk moved seamlessly between work and home, an effortless, constant dialogue.

And a best friend is a very specific concept. Gallup’s findings suggested that “having a best friend at work was a more powerful indicator of workplace outcomes than simply having a ‘friend’ or even a ‘good friend’.” The best-friends group were found to produce higher quality work and be far more engaged in their jobs than others.

I enjoy my job and don’t expect my productivity and engagement to suffer because of Sarah’s departure. Plus I have other friends at the office – including a few “good friends”. But the world of work relationships is a diverse and fragile ecosystem and goes beyond simply tick-boxing people as colleagues, friends (of whatever level), bullies, irritants and so on.

There is also a rare and particular kind of workplace encounter that I especially value. Our former FT colleague Lucy Kellaway used the term “office spouse” to describe this phenomenon, a close – but not freighted or fraught – friendship between men and women who have their work in common.

I have only had one office spouse at the FT – a smart, kind colleague I worked closely with for several years. He made a tough time more bearable. But I once introduced him to someone as “my friend” – and he corrected, in a flash, “colleague”. But in my mind we were friends first and colleagues second.

In hindsight, I needed his friendship far more than he needed mine. The experience of workplace camaraderie is one reason why sticking with corporate jobs, at whatever cost in childcare and in stress levels, is so important for many mothers. It allows us to interact simply as adults, with all sorts of people. At that time, beyond my husband and our immediate circle, I hardly came into contact with men. Motherhood had vacuumed up my social life.

My ex-office spouse and I now work in different departments. We rarely see each other, but when we do have lunch we pick up seamlessly where we left off. There are no awkward gaps in the conversation. I’ll take that as a testimony to an enduring friendship.

And it takes a long time to make friends in adulthood. The shifting sands of workplace dynamics mean that few friendships that begin at adjacent desks can survive an end to that proximity. When people take on new roles, relying on office gossip isn’t enough to sustain a friendship.

Sometimes, there are ruptures even before people change jobs. Early in my career on a trade publication, the reporters came in one day to find the newsdesk rearranged. Two journalists – in an on-off and apparently now very much off relationship – had had an almighty row and their desks had been separated by the editor. Everyone had been shifted to accommodate the split.

It’s been nearly two months since Sarah left. “At least your best friend hasn’t gone home to New Zealand, ” said my husband, who still misses his former colleague, years after the latter’s departure from London. “You can just carry on seeing her.”

True. I’ve got the dinner dates in my diary. No more hurried lunch-hour trips to the sandwich shop for us. There may be an upside to this after all.