The real problem with PowerPoint? It’s us, stupid 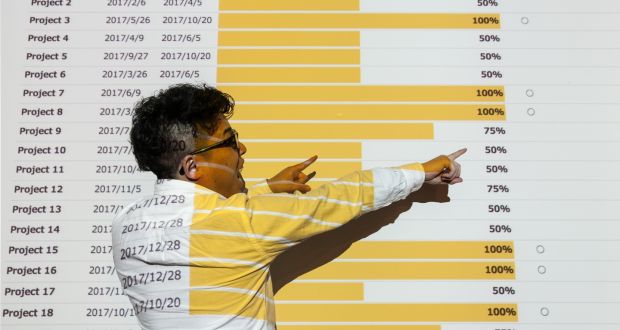 PowerPoint presentations are typically a festival of unfathomable graphs and bullet points, often read out verbatim.

An email dropped into my inbox not long ago from a man in Japan who wanted to know if I could come to Tokyo to speak at a conference.

I immediately said yes, thrilled at the thought of a couple of days out of the office in one of my favourite cities. No sooner had I started swanking around at work, casually dropping news of the impending trip to colleagues, when another email arrived from Tokyo.

It came from the conference organisers and contained two chilling words: “PowerPoint presentation”. Every speaker was expected to make one, it turned out, and the organisers were keen to see mine.

Happy thoughts of sashimi and sake instantly gave way to panic. This was not because of the usual objections to PowerPoint presentations: too long, too impenetrable and too good at reducing any room’s atmosphere to lifeless tedium. It was more that I had made it through my entire working life without ever having to deliver one. Nor had any colleague within earshot, because journalists seldom need to.

But the organisers seemed to think slides would help when a speech was being simultaneously translated, so I asked for advice from a friend who is known as a presentation whizz. “Use big fonts, hardly any charts, a few slides, tell a story and keep it simple,” she said. “And use a lot of big pictures.”

I could see her point. I had just been to two energy conferences where two different speakers both used the same two black-and-white photos of New York’s Fifth Avenue at Easter in presentations on the speed of technological change. The first photo was taken in 1900, when the street was rammed with horses and carts. “Can you spot the car?” each speaker asked, eventually pointing to a solitary vehicle. The second was taken in 1913, when cars had taken over. “Can you spot the horse?” both speakers said. You couldn’t.

It was memorable stuff. By the time I arrived in Tokyo, where I was speaking about British climate change policy, I had a batch of pictures ready, mostly of Prince Charles.

US generals have called PowerPoint dangerous, as it gives the illusion of understanding and control

I was also worried: company executives were expected at the conference and my presentation was shaping up to be unlike those I had seen most business people make.

These were typically a festival of unfathomable graphs and bullet points, often read out verbatim, even though PowerPoint became a byword for boring people into oblivion almost as soon as it hit the market in 1987.

People were already talking about “death by PowerPoint” by 1996, when Accountancy Age magazine quoted an executive using the phrase. Since then, the program has spawned an entire industry of critics.

Scholars blame it for trivialising information and making people stupid. Educators say it teaches children to make sales pitches instead of school reports. US generals have called it dangerous, because it gives the illusion of understanding and control.

Yet the business world has taken no notice. PowerPoint has been installed on more than a billion computers worldwide to relentlessly stupefying effect. And after Tokyo, I can see why.

First, it takes a lot of time to think carefully about what you want to say and find the best way to say it, even if your company is large enough to employ a team of PowerPoint geniuses. I tried to follow my friend’s advice in Japan, but ran out of time and ended up resorting to an unseemly number of bullet points.

This was partly because of another problem: peer pressure. If leaders in your industry turn up with the same impenetrable slides at every conference – a constant risk at business gatherings – it is easy to think you will not be penalised for following suit, but might be if you deviate.

This points to a larger dilemma: the tendency to confuse complexity with expertise. Everyone knows the most effective speakers explain things simply. And everyone knows countless successful people who don’t.

Ultimately, PowerPoint and its many derivatives are not to blame for this, though the world might be a better place if more people spoke without them. Until then, it is best to remember that the most important thing you can do with PowerPoint is use it in a way that actually helps you make a point. – (Copyright The Financial Times Limited 2017)