The office farewell is more than just cake and sniffles 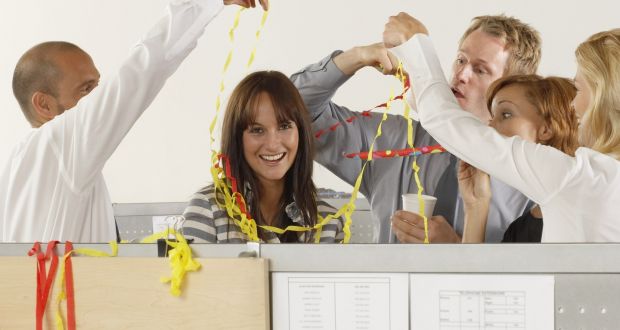 Paul Dacre caused a considerable amount of outrage in the 26 years he spent editing Britain’s noisy Daily Mail newspaper. But when he finally stepped down the other week he did something so remarkable it is hard to think of a precedent. He left without saying goodbye.

Instead of a farewell speech to staff he left a seven-paragraph letter pinned to the office noticeboard. In it he pointed out he was not really leaving as he was off to a grand-sounding job upstairs, but apologised to those who thought he should have said a few words from the floor: “Frankly it’s not my style, and in all my years as editor not something I’ve ever done.”

I am unsure what is more surprising about that sentence: the audacious nature of the brush-off or the news that Britain’s most feared editor went for nearly 30 years without ever giving a desk-side address.

Either way, ducking a farewell speech is an odd move for any office veteran, particularly a boss. I do not see it catching on, though I know people who wish it would.

I was talking to a friend not long ago who said she had reached “peak farewell”. Her firm was emptying at such a pace that barely a week passed without at least one leaving do. On top of that, she moaned, it was the sort of place where you only had to shift desks to find yourself surrounded by cake and goodbye cards. “The other day they had a farewell for the intern!”

I could see her point about farewell inflation, though I expect the intern saw things differently, and personally I always find cake cheering. For me the larger problem with the work farewell is the risk of dishonest drivel.

There is much to be said for the polite goodbye. But a speech that completely ignores, say, the speaker’s move to a bitter rival or a brutal forced exit has little to recommend it.

One should at least follow the example of Rex Tillerson. When the ex-US secretary of state farewelled his staff after he was cruelly sacked by presidential tweet, he said all that was needed by noting Washington could be “a very mean-spirited town” – and failing to mention Donald Trump’s name once.

The pleasure of the well-aimed parting shot is a fine reason to make a farewell speech. Another is more important: dodging can seem rude and graceless.

Dacre’s letter was in fact both courteous and appreciative, strikingly so for an editor who bollocked his underlings with legendary enthusiasm. Still, his words would have carried far more weight had they been uttered in person.

The further problem with not speaking is the suspicion it raises about the parting: Is there something else behind it? Is it more painful than it appears? Did the leaver fear a speech might have ended in mortifying tears?

I sympathise with anyone who dreads the idea of public speaking but a good goodbye is important.

I still remember a colleague I always liked who used to sit at a desk a few feet from mine in an office we had both worked in for years.

One day she got up and wordlessly left the building. A little while later she sent a six-line email announcing she had gone for good. It still reminds me that farewells concern not just the dodger but the dodged. There is a surprising amount to be said for saying goodbye to a colleague you have known for years, as you discover when unable to do it.

Yet the finest parting addresses are given by people who do not merely thank their fellow trench-toilers but offer a glimpse of who they are and how an organisation works.

One of my favourites was given not long ago by a very nice man at the Financial T imes whose speech was less of a farewell than a record of appalling professional disasters: the dire bout of food poisoning in the middle of a work trip, the phenomenal cock-up in the first day of a new job. On and on it went. At the end of it people were literally crying with laughter – and relief.

We had all been through some version of his horror. He was reminding us we worked at a place where failure was not exactly an option, but not a death sentence either. Fundamentally, he was simply being human, and there can never be too much of that, inside or out of the office. – Copyright The Financial Times Limited 2018