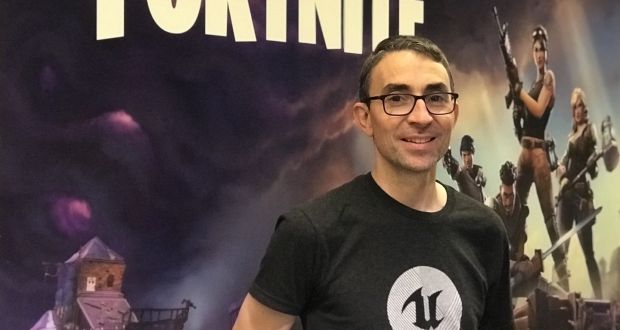 Gavin Moran left Ireland for the US in 1994

As creative cinematic director at Epic Games, the majority of Gavin Moran’s work revolves around Fortnite Battle Royale, currently one of the most popular games in the world. “It is endlessly challenging and fun to work on and we are all incredibly proud of its continuing success,” he says.

He is currently based in Marin County, just north of San Francisco, after a recent transfer to one of his company’s West Coast studios.

Moran’s adventures began when he secured one of the Morrison green cards in the 1990s while he was two years into a three-year animation course at Dún Laoghaire College of Art and Design.

“I left Ireland on July 22nd of 1994. I had a one-way ticket and $1,500 in my pocket. It seems so naive now, but when you’re young it’s all just a big adventure and nothing seems impossible.”

Shortly after Moran arrived in America, he was given a tip about a job from an Irish guy at a party.

“David and Debbie Spafford had these great parties and everybody in animation knew them or knew people that knew them. That tip got me a job.”

Initially he worked at some smaller studios around Los Angeles as a traditional 2D hand-drawn animator and character designer, but after seeing the original Toy Story in the cinema, he was inspired. “I just knew that CG [computer generated] animation was the future for me.”

An Irish man who worked at Disney helped him to get a job there. When Moran first went to work in San Francisco it was another Irish man, Greg Maguire, who told him about the position.

“Irish helping Irish and Chinese helping Chinese etc isn’t new. In comparison to the mid-’90s, the number of Irish coming to the States specifically for animation seems to have decreased,” he says.

With so many opportunities in London and Europe as well as homegrown studios, Moran considers it no longer necessary to travel to the US to find high-level work.

Tired of the grind

While in Los Angeles he worked at Sony Pictures, Dreamworks and then Sony Pictures again until the spring of 2010. “At that stage I was an animation supervisor but I was tired of the constant grind. Every show was less time and even less money than the prior one but even more shots and more complexity.”

Moran decided to take a chance with his wife, Sandra, and moved to the east coast as an animator at Epic Games in North Carolina.

He has directed motion-capture actors as well as being in the motion-capture suit at times. “It depends on what has to be done on any given day. I work with a team of talented people and the desire to do the best we can with the resources available is high.”

The studio made the short film Kite, which was nominated for an Annie award, a huge accolade in the animation world. “Since then, we’ve made fully real-time animated shorts, worked on digital humans, partnered with Porsche, and I’ve even played a digital stormtrooper in a technology demonstration we did in partnership with Nvidia, ILM and Lucasfilm.”

In creative-related fields, Moran sees huge opportunity by moving abroad. “When I left Ireland, Don Bluth’s studio had closed and there were few animation jobs left. Only a few small TV productions and that was it. It’s better now with the various Irish studios. But moving to a place with a lot of concentrated studios, such as London or Vancouver, the competition for the best talent available means you are rewarded for being good at your job.”

The way the industry is evolving, especially in any tech-related field, has made the world a smaller place. “At Epic, we have people from all over America and all over the world – every nationality, colour, creed, sex and age.”

The big problem he encounters in his current position is that it’s difficult to make something that stands out, with so much content being generated and distributed. “Hoping that something goes viral is not really a plan for securing your future,” he says. “Then again, at Epic we sometimes see amazing work being done using our engine by people all over the world that we were completely unaware of up until that point.”

In some cases, the work will be shared across the company, and sometimes the creators will be approached about opportunities to join Epic.

The US is very different to Ireland, and Moran says that, while he emulates the things from home as best he can, like a good roast dinner, he also embraces the good from his adopted land and tries to ignore the things that don’t suit his lifestyle, such as the gun culture.

Moran’s future is with Epic Games for the foreseeable. “It’s an amazing company and it would be hard to go back to VFX or even to another games company after working here.

“Helping to push the future of real-time digital software and entertainment is as challenging and rewarding a life as I can imagine. Someday I hope to finish the R2-D2 I’m currently building. If history repeats itself, this will never happen, as with many other ambitious projects, ready to start or waiting to be completed in boxes in the garage.”