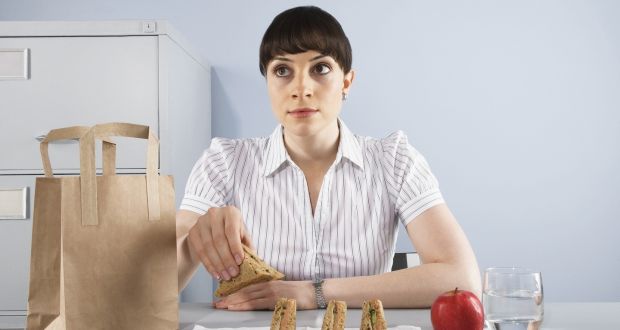 I made a rookie error by making a ham sandwich. Every. Single. Day.

December was a month of two halves. Profligate spending on presents, food and alcohol in the early weeks, followed by days of bingeing on Netflix, mince pies and cheese.

Feeling lardy and broke by January, I set myself two food-related resolutions. The first was to make my lunch every day to take to work in order to save money. At a conservative guess, based on paying £5 a day, it would be easy to spend £1,200 a year. The second resolution, predictably, was to rein in my calorie consumption.

Two weeks into the new-me regime, I have discovered a number of work-related temptations and pitfalls.

On day three, I left my lunch at home. The challenge was remembering not only to make it, but also to take it to the office.

One colleague has found a solution: to pack her meals in a brightly coloured children’s lunchbox. Its appearance is so striking, she cannot forget it. And surely by the end of the year her co-workers will have stopped mocking her? For the moment, I will just set a reminder on my phone.

There is also the faff. I made a rookie error by making a ham sandwich. Every. Single. Day.

Soon I began to hate my lunch. I was put right by aficionados, who recommend I cook my lunches ahead at the weekend. That is a step too far. Instead, I will follow the FT’s thrifty personal finance editor’s advice, by making too much dinner the night before. This, she assures me, has the effect of stopping you from pigging out the previous evening, as well as saving time and ingredient costs.

Yet the biggest problem, aside from eating it at 11am — just because, you know, it’s there — is the absence of a daily reward. I am waiting to see whether the joy of buying dresses with my lunch savings outweighs the daily pleasure of a posh sandwich.

One way round the packed lunch drag is to attend as many meetings as possible at which sandwiches are served. But the obvious flaw is the meetings.

I was tempted to try to score lunches at other companies, having been impressed by the fine dining prepared by teams of chefs, at law firms and banks. Yet this would expand my waistline. Moreover, a diary filled with work lunches would waste time that I could be devoting to other things like, for example, my job.

Good intentions are easily undone by the office feeders, those colleagues killing us with their sponge-cake kindness

Working at home is a possibility. But there the temptation is day-long grazing — crackers, cereal (multiple bowls), the OK-ish bits of a brown banana. In any case, I have been somewhat worried by a woman I know who made the switch from corporate to home-working. Sure, she is happier and less stressed. But she is also a stone heavier.

Of course, if I do forget my packed lunch, there is a relatively cheap option in the office. Over the years, the FT canteen, like workplace eateries the world over, has tried to serve healthier food. The trailblazer was Google, setting the tech fashion for free, high-quality lunches and dinners, which conveniently kept staff at work for longer.

Such perks, which aim to improve productivity, have placed a premium on fit cats over fat cats. Yet companies’ ambitions to improve the health of their staff are often derailed by one thing: employees.

Despite the best efforts of the FT canteen to offer “superfood salads” and vegan dishes, fried chicken katsu curry with sticky white rice remains one of its most popular dishes. If employers urge healthy choices, it may lead to tiny acts of rebellion by the staff.

In any case, good intentions are easily undone by the office feeders, those colleagues killing us with their sponge-cake kindness. From my desk I can spy packets of mince pies and tubs of flapjacks.

Such offerings bring out the student in all of us. One behavioural economist who has researched such things once told me that if free food is within reach, people will eat it even if they do not like it, or it appears rotten.

The only way to curb the grazing is to place food out of the way or to charge for it. Any kind of transaction or obstacle helps stop the mindless greed.

So may I suggest a donation box next to the cake plate? Just as soon as I have eaten this mince pie.