Study finds communication between management and workforces is poor 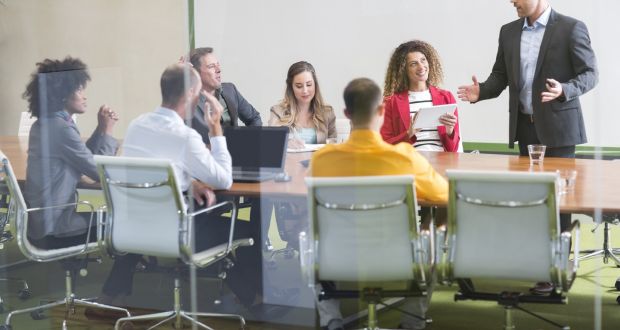 ‘The CEO should always explain to employees in person and with content that resonates, why decisions are being taken.’ Photograph: Westend61/Getty

In the movie Lost in Translation, an aging US actor is in Japan filming a whisky commercial. The Japanese director speaks at length about how he wants the actor playing the part to behave. The translator, who clearly can’t be bothered, reduces the instructions to a few sentences with a great deal of what was said “getting lost in translation”. This is exactly what happens with communication in the workplace.

CEOs, senior managers and team leaders think they have put their message across and then wonder why it doesn’t appear to have been received.

Keeping people in the dark or not communicating adequately with them, especially if there’s a problem, is a perennial bugbear in the workplace. Employees continue to find out about issues affecting them through the media and continue to complain that management simply doesn’t communicate often enough or well enough with them.

This is borne out by recently completed research, New Times, New Leaders, commissioned by public relations consultancy PR360 and conducted online on its behalf by Amárach Research. The sample size was 1,000 employees from different sectors working in organisations employing 50 or more.

One of the questions people were asked was how their CEOs behave during a crisis. Roughly a third said they didn’t notice any change in visibility or accessibility while 36 per cent said he or she was more visible and 34 per cent said they were less visible.

“Not only does increased visibility create a sense of solidarity with staff but a high visibility leader also plays an important role in fostering calm and reason,” says PR360’s managing director, Dan Pender.

“New Times, New Leaders also shows that, while many CEOs get the basics of communications right, their lack of an overarching communications strategy and weaknesses in how they engage is harming morale and productivity, especially during times of change. Knowing why, what and how to communicate, internally and externally, is the CEO’s most powerful asset. In an extremely tight labour market a confident, proactive CEO is often the only thing keeping a good employee from jumping ship.”

Margaret Heffernan is a seasoned CEO, entrepreneur, lecturer and the author of Wilful Blindness which delves into why we ignore the obvious at our peril. She has little patience with managers who assume they have communicated enough.

“You can’t over-communicate,” she says. “Also, tell the truth. If it’s bad, say it’s bad. Don’t prevaricate or use weasel words like ‘challenges’. Be concrete and real. If it’s going to be tough – say so and ask for help.

“I can remember one interaction at a company where the CEO and two of his senior people, all in dark suits, did a video cast addressing their global workforce,” she adds. “It was terse, tense and sombre and came to be known within the company as ‘the funeral video’.

“It was abstract, non-specific and lacked the kind of detail people needed to understand what the strategy being laid out would mean for them. And then these guys were gone, leaving the workforce to try to decode what had been said. I’m sure it all made sense to the three individuals, but not to anyone else.

“Their second mistake was not to follow up with local face to face meetings.

“Sending others, particularly if it involves something major for an  organisation, suggests that the CEO is afraid or too grand to talk to his minions and this goes down so poorly.

“Their third mistake was that the webcast was so meticulously produced that nothing live was allowed to happen. This instantly suggests fear: what does the CEO think people are going to say or do? People trust Q&As when they’re live and unscripted – they don’t trust them when they’re ‘produced’. Never underestimate the power of one-to-one communication or a personal, handwritten note about something,” Heffernan says.

Pender’s advice to those whose communications skills need brushing up is to start by fostering understanding.

“CEOs are decision makers and decisions often divide, particularly in tough or complex situations,” he says. “The CEO should always explain to employees in person and with content that resonates, why decisions are being taken. This earns respect and trust while building a culture of open communication.

“The CEO is no longer just the suit at the top of the food chain. In a post-Steve Jobs world, CEOs are visionaries and leaders as much as they are heads of business. The CEO who broadly embraces an empathetic and open approach to communications will create a positive, more productive workplace culture. They will also improve their own performance.”

87% say it’s important that workers have a sense of what’s happening at the company and what it’s striving to achieve.

38% of employees have heard a news story about their employer in the media before it was communicated internally at least once before.

44% of employees say that the most senior person in their organisation isn’t visible to staff and discourages people from dropping into their office.

40% say that their senior leader rates “okay”, “poor” or “very poor” for their communication ability.