Sign of the times: Companies easing the path to parenthood for both parents 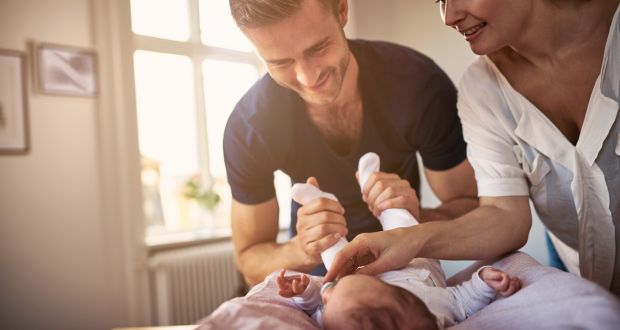 Recognising that juggling work and a new baby tests even the best organised parents, the company is aiming to ease the path to parenthood by topping up maternity leave with 16 weeks paid leave for fathers and second parents. Photograph: pixdeluxe/Getty Images

It’s a sign of the times at software company, Zendesk. Its Irish workforce is getting older and the patter of little feet is growing louder as the number of new parents at the company rises.

Recognising that juggling work and a new baby tests even the best organised parents, the company is aiming to ease the path to parenthood by topping up maternity leave with 16 weeks paid leave for fathers and second parents.

Zendesk is keen that as many people as possible avail of the scheme and Sarah Manning, the company’s EMEA HR director, emphasises that they can do so without fear of jeopardising their career.

“The message that it’s OK to take this time is coming from the top as even the most senior leaders in the company have done so,” she says. “We’re a very pro-family company and want to do our bit to alleviate the bias that exists towards women being the main caregivers.

“We also think it’s a good thing from an empathy perspective for men to experience what it’s like to step out of the world of work for four months, to be at home all day and then see how daunting it can feel re-entering the workforce.”

Insurance company Aviva introduced a similar scheme two years ago and, so far, 30 people have made use of it. Its scheme provides up to 42 weeks of parental leave, comprising 18 weeks on full pay and the balance unpaid, and it’s applicable to both birth and adoptive parents.

“The take up has been across the board and this includes senior managers reporting to the CEO, so it is very much a case of this being seen as an acceptable thing to do,” says Shaun McDonald, chief people officer. “Those that have taken the leave have described the experience of being at home with their new babies as life changing.”

Asked how Zendesk copes when a new parent steps out of their role for four months, Manning says that because it’s something the company encourages, it builds the logistics involved into its human resources planning.

“Very often someone looking for a career move will take it on as a project for four months,” she says. “They get the opportunity to step up and try the role and this helps us and them to see what their next career move might be. It’s good for their credibility and their experience.

“Most people who take the leave return to the same role when they come back. We provide the same job protection as if it were a statutory protected leave.”

Zendesk has been in Dublin since 2012 when it opened its doors with just two engineers. Today, it employs 432 people of more than 30 nationalities and Dublin is the company’s EMEA headquarters and a global hub for product development.

Software development in general is a very male dominated area and it’s the same at Zendesk where women only make up 18 per cent of its technical teams.

The company has launched a number of female friendly initiatives to help support women and shift the balance. At a practical level, it uses AI to remove gender-bias from recruitment ads and it is committed to an annual gender pay parity audit.

It also provides mentoring to help women with their career development and, recognising that new mothers face particular challenges if they are still breast feeding when they return to work, the company has set up a dedicated mother’s room where they can express milk in privacy. The company also backs The Village, an online support network for employees who are parents or caregivers where they offer each other help and advice.

Aviva recently turned its employee support spotlight on its male employees (around 47 per cent of its total workforce of 1,530) with an event aimed primarily, but not exclusively, at them. It saw rugby legend Tommy Bowe participate in a Q&A focused on gender balance and wellness.

“We were discussing matters such as challenging gender stereotypes at home with your children, being an active father, balancing being a Dad with working, paternity leave and supporting the partner in your life to help them achieve their career objectives,” McDonald says. “In terms of wellness, it was around mental health issues including suicide risk and being health aware, particularly of certain male cancers.

“Tommy is a highly respected individual and we believe that having him talk openly about these topics will make it easier to create an environment where men can talk more easily rather than feeling they always have to be resilient and tough it out.”

Aviva has an online support portal that employees can access 24/7 and McDonald says male employees are more likely to use the mental health tool on this for help if they’re feeling under pressure rather than speaking to someone. “The privacy aspect seems to be important for men and we respect that,” he says.

Aviva says it offers special support to employees undergoing gender transition and McDonald says the company’s aim is to “have a workplace where everyone can feel safe and supported”.

The company tries to encourage a good work life balance and offers flexible working hours and working from home and from different sites to avoid long commutes. It also encourages employees to take mental breaks during their working day and get physically active by going to the onsite gym or joining an activity group at lunch time.