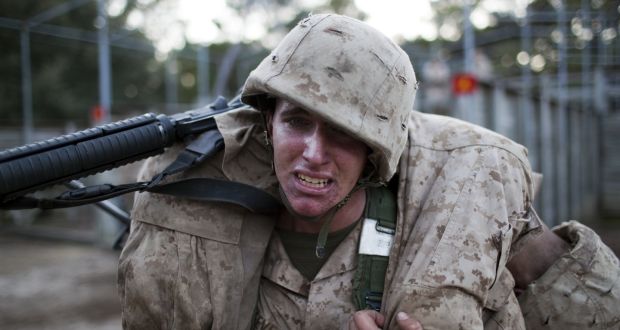 A US marine corps recruit training at Parris Island in South Carolina. One study found marines who failed basic training could pass when supported by a buddy system. Photograph: Robert Nickelsberg/Getty Images

The smash hit musical Hamilton opened recently in London’s West End. A hip-hop rendition of the life of a founding father of the United States may not seem like an obvious starting point for a discussion about working life, but one of the key themes in the story is the extraordinary resilience of Hamilton as a person and as a leader.

From a small island in the Caribbean, born into poverty and orphaned at an early age, Hamilton, who is commemorated on the $10 bill, arrived into the fledgling US at 14 and rose to become first secretary of the treasury and architect of the nation’s financial system.

At a time when workplace stress and burnout seem to be at endemic levels, and the global economic, political and security environments feel more uncertain and unstable than ever, this personal and organisational characteristic is even more important for us to understand.

But what is resilience? All of us know people who seem able to “bounce back” from real difficulties more easily than others. More interesting, we also know people who are extremely successful in spite of a poor start in life. While common sense might have dictated they would falter, in fact they have flourished in rather stony ground.

One of the first people to use the term resilience was Norman Garmezy, a developmental psychologist and clinician at the University of Minnesota. Garmezy, like many psychologists, studied the reactions of children to the circumstances in which they found themselves.

What he found interesting was not children who had problems or who were “acting out” in school, but those kids who should have been exhibiting problems but weren’t. These were kids whose home life and personal circumstances put them at high risk, but who were functioning well, sometimes excelling.

Garmezy looked for elements of strength, rather than weakness.

Subsequent research has identified a number of “protective” factors that allow children and adults alike to overcome the obstacles that life and work throws at us. Things such as a personal feeling of autonomy, an understanding of the ability to act independently rather than react to their environment and an ability to control emotions and impulses are shown to be key to bouncing back from what can feel like mountainous difficulties.

People with high levels of resilience tend to “frame” challenges as opportunities and perceive difficult experiences as having a dimension which could lead to personal, psychological or sometimes spiritual growth.

The other interesting finding of much of this research indicates that we can build, but also weaken our own resilience and ability to move forward in times of difficulty.

So what sort of strategies can we put in place for ourselves and our colleagues that allow us to become more resilient personally and professionally?

The first step relates to the research above. It’s useful to ask ourselves how we tend to perceive events, difficulties or circumstances outside our own control. This is “framing”, a cognitive mechanism that can elicit negative feedback or a positive reimagining.

Actively understanding that we have more control than we think gives us back mental space, which can be liberating. Other well-known strategies such as mindfulness – “staying in the present moment” and compartmentalising challenges are also popular and useful.

One active approach is the decision to observe a situation rather than react to it. The next time you are faced with a workplace challenge or a difficult meeting, focus on observing what is actually happening rather than your own emotional or psychological reaction. Be actively aware of the internal story you are telling yourself. We can significantly increase (and decrease) our personal resilience by managing the internal messages we give ourselves.

And how do we develop resilience in others for whom we might have some responsibility?

Perhaps the biggest lesson from the collected research on resilience is the importance and the possibility of building what researchers call “a scaffolding of support”. This doesn’t mean mollycoddling or lifting difficulties from others. It means actively modelling not just success, but the way to success.

One fascinating study of US marines who had failed basic training (a public and humiliating experience) took those marines through that training again, but this time buddying them with a partner every (literal) step of the way. The marines transformed public failure into public success – but not on their own. They still did the work, but with a personal and organisationally scaffolding of support.

Turning around what feels like a failure is possible – both for ourselves and others. One of the most interesting things about Hamilton’s story was that even in the most difficult of circumstances, he had people who believed that he could succeed. Even Hamilton couldn’t do it on his own.

Dr Joanne Murphy is a lecturer at Queen’s University management school and a fellow of the Senator George J Mitchell Institute for Global Peace, Security and Justice.