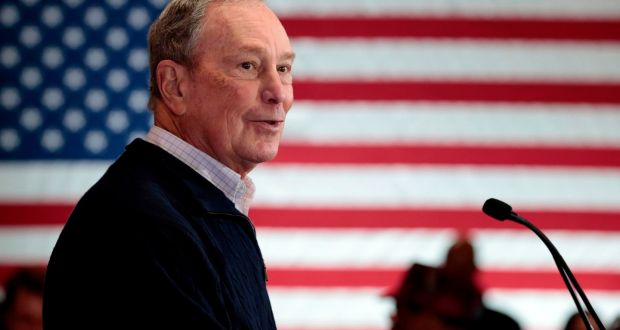 Tuesday December 10th was an eventful day for Donald Trump, even by the US president’s own hectic standards. It began with the unveiling of impeachment charges accusing him of grave misdeeds and ended with a campaign rally in Pennsylvania where he called FBI agents “scum”, described one prominent Democrat as a “crooked bastard”, and claimed another top Democrat’s marriage was a “phoney, disgusting” sham.

On the other side of the Atlantic the same day, one of the Democrats hoping to unseat Trump in next year’s presidential election gave a calmer speech at the UN climate talks in Madrid. “I am here because no one from the White House is here,” said Michael Bloomberg, the New York billionaire and climate campaigner.

Away from the stage in Spain, Mr Bloomberg met a small group of journalists who received a heavy dose of another campaign message. It had nothing to do with impeachment, outlandish behaviour or any other Trumpish trademark. It was simply this: Mr Bloomberg would be a better manager than Trump.

As political mantras go, it is hard to see this one gripping voters coast to coast in the US. “It’s the management, stupid!” does not brim with bumper sticker promise. That is a shame.

White House occupants clearly need a lot of skills but at a basic level, as Bloomberg put it, “the president’s job is a management job”.

His financial media group employs about 20,000 people and New York City had 300,000 employees when he was its mayor, he said. Experts have estimated that no more than 4,000 people work for Mr Trump’s real estate empire worldwide and in any case, said Bloomberg, that type of business offers thinner management experience because “you deal with a customer once, you sell them a building and then you don’t go back”.

In fact, you might if you have been in real estate for as long as Trump.

But Bloomberg made a convincing, and refreshing, case when asked what he would do in his first 100 days if elected. “Build a team,” he replied. He had faced pressure to make a splash in the first 100 days of his three terms as New York’s mayor, but the dull truth was he was busy building a team.

“It takes a long time to do big things,” he said. One reason for his mayoral successes was a relatively stable team of experienced staffers with ideas, who could attract talented people to work for them and ultimately effect change.

“You can’t do anything, I don’t care how smart you are, if you don’t have [the] people,” he said. “And you can’t have turnover all the time.” How true.

Trump’s administration has of course been notable for a relentless change in personnel. As of last week, 80 per cent of the top 65 White House jobs had turned over since Trump took office, says Kathryn Dunn Tenpas of the Brookings Institution, adding a rate of turnover that high was “off the charts”.

Staff turnover may not be the most important feature of Trump’s tenure and Bloomberg has yet to prove he can secure the Democratic nomination, no matter how impressive his managerial background.

Wheels of business as politicians?

So what of the broader argument that a business leader makes a better – or even a very different – politician?

Voters clearly think they do. More than 80 per cent of Americans thought the US would be better governed if more people with business and management experience were in political office, one Gallup poll found. Though that was in 2014, before anyone had experienced the Trump presidency.

More recent research suggests voters may be mistaken. At least two studies in the past three years have looked at the performance of city government politicians with a business background.

One in California found no evidence that electing a business candidate to a city council affected spending, revenues or unemployment rates. That echoes the early findings of research on Brazilian mayors that suggested business people were no better at reducing fiscal deficits, investing in health or getting money from the federal government.

Still, there are business people and business people. And if three years of the Trump presidency has taught us anything, it is that some are entirely different to all others. – Copyright The Financial Times Limited 2019