Pilita Clark: I have never been entirely on board with working from home 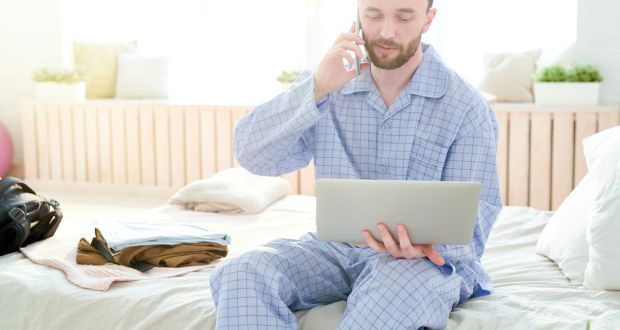 The internet has filled with advice about working from home for the uninitiated: stick to a ritual, ditch pyjamas and get out of bed, especially for a video call

One Friday last month I was in the middle of a video conference call with a man from a well-known bank when we were interrupted by a dreadful noise. “Argh,” he said, jumping up to investigate what sounded like a jackhammer about to blast through his wall.

The din eventually subsided, but just as I was wondering why a bank would let builders so near its staff in the middle of a work day, the racket started again. Then there was a knock on the man’s door from what seemed to be an angry woman. By now I was thoroughly baffled. What sort of bank was this?

As it turned out it was not a bank at all. It was an apartment building. The man I was interviewing was doing what he usually did on a Friday: working from home. So was the woman at his door, a neighbour, and others in the rest of his building. Everyone was appalled at the nerve of whoever was making the ruckus while they were trying to work.

I thought of them all last week as I read that so many people in China were being urged to work from home to stem the coronavirus outbreak that we were on the brink of the world’s largest work-from-home experiment. Early results are already in, and so far they look benign.

Shares in the Zoom videoconferencing outfit have, as it were, zoomed. Another video chat service has reportedly rushed to add a beautifying camera filter to its app in response to surging demand. The internet has filled with advice for the uninitiated: stick to a ritual, ditch pyjamas and get out of bed, especially for a video call.

I predict worse lies ahead. When strikes crippled public transport across France in December, a friend in Paris told me it led to a nasty divide in his office. Some managers were happy to let underlings work from home. Others demanded everyone turn up, even those who had to spend two hours struggling to get into the office, and another two to get home, partly on foot. “People were absolutely knackered,” he said. “And very grumpy.”

His story reminded me of one reason why I have never been entirely on board with working from home. It is unfair, because even when bosses are sensible not every job allows it.

It is also inefficient. No matter how fast people jump to obey a Slack or WhatsApp ping, it is invariably easier to get something done with a person right in front of you, and sometimes safer.

Last week British rail investigators reported that a London train narrowly missed crashing into a track maintenance machine after two workers responsible for train movements at the time had spent a “significant proportion” of time working from home.

Background noise at home might have affected “safety critical communications”, they said, something I can well imagine after my jackhammer video chat.

The office also gives you a better chance of picking up new ideas and, crucially, a lot more gossip.

I would never want to work at GitLab, a tech group that has more than 1,100 employees in 60-plus countries but no offices, making it one of the largest all-remote companies.

I realise this makes me wildly out of step. A colleague who was in Davos the other week heard one top US recruitment firm executive say remote working has become the fastest growing employment benefit. Why? It cost employers nothing and workers loved it. That chimes with Gallup research showing 54 per cent of US workers would switch jobs for the choice to work remotely.

I am also verging on colossal hypocrisy. These words are being typed on my dining room table at home, a spot I resort to when my gnat-like attention span makes it hard to concentrate in the office.

I am, therefore, inclined to believe research suggesting that working from home can lift productivity. And I know there is plenty of evidence that flexible working is one of the few things a company can do to help close the gender pay gap.

Ultimately, working from home is neither as bad nor as brilliant as it is often said to be. Like so much else in modern working life, for a lot of us it is simply inevitable.– Copyright The Financial Times Limited 2020