Pilita Clark: going green is easier when you have deep pockets 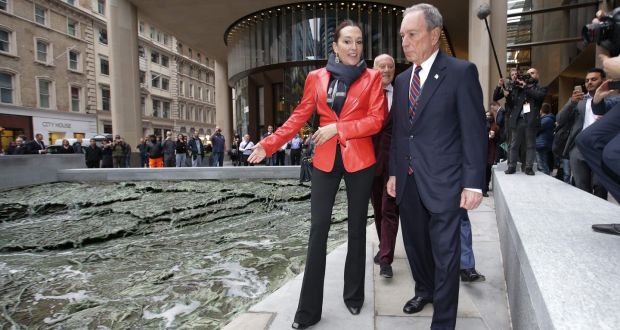 Michael Bloomberg is my sort of billionaire. He put himself through university, built a media empire from scratch, made the city of New York more liveable and has an age-appropriate girlfriend.

Yet after touring the new Bloomberg headquarters in London that he opened last Tuesday, I can see he may also be remembered for something more humble: toilets. Or rather the amount of water needed to flush a toilet.

This is because Bloomberg likes to spend his spare cash on earthly problems such as climate change, not wacky treks to outer space and other pet billionaire pursuits.

So when he hired the British starchitect Sir Norman Foster to design his office, he said he wanted a showcase for the greenest, most environmentally-friendly building possible. That is pretty much what he has got, at a reported cost of £1 billion.

The result is far from perfect. Thanks to Bloomberg’s obsession with doorless, open-plan working there is not a single private office and a lot of the desk space is cramped. But there are compensations on other fronts.

“This feels like the future,” gushed a reporter I met at the opening, gobsmacked by the scale of the building’s green features.

The most visible of these are not the most exciting: thousands of energy efficient LED lights dotting the ceilings, and big bronze blades on the outside walls that can let in fresh air when weather permits, cutting the need for power-hungry air conditioning.

More interesting are the hidden carbon-dioxide sensors that can sniff out where people are breathing so air flows can be directed to where they are most needed and cut off where they are not. That saves energy, as does a mini-power station system in the basement that captures waste heat so it can be recycled around the building.

Yet it was only when I went to the lavatory that I experienced what may be Bloomberg’s larger contribution to the annals of sustainable building.

There is a familiar whooshing sound when you flush because of a vacuum system like those in aircraft that use air to whisk away waste. The arrangement only needs a fraction of the water deployed in a typical loo. This cuts the building’s water use so much that managers can get away with using rainwater collected on the roof for flushing – along with recycled water from basins and showers – instead of mains supplies. It should also cut waste removal bills.

The vacuum flush system is a first for an office block of this size in the UK, according to Sweco, the engineering company behind it. It may not be the last. Sweco is already fielding calls about it from people in water-conscious Australia, and expects to hear from more.

If that happens Bloomberg may have paved the way for one of the biggest advances in water-saving technology since the dual-flush toilet caught on 20 years ago.

Or not. Impressive as this system is, it needed a big-pocketed backer. The money saved on water and waste bills means it should eventually pay for itself, but probably not for at least 20 years – too long for most commercial developers today. Costs should come down, especially if the system is installed in buildings that are more compact than the sprawling Bloomberg block. But it is not clear when.

The same goes for a lot of the building’s other green gadgetry, which matters. Buildings in general typically use so much energy to heat, cool and light their occupants – often very inefficiently – that they account for about a third of greenhouse gas emissions in developed countries.

If all new offices were like Bloomberg’s, which is made up of two linked buildings and has room for 8,000 employees, they would use about 35 per cent less energy and 70 per cent less water. That may not happen soon.

It is good to see what such collaboration can achieve. It will be even better when it doesn’t take a billionaire to do it. – Copyright The Financial Times Limited 2017