No response from those emails and texts? It’s time to get verbal 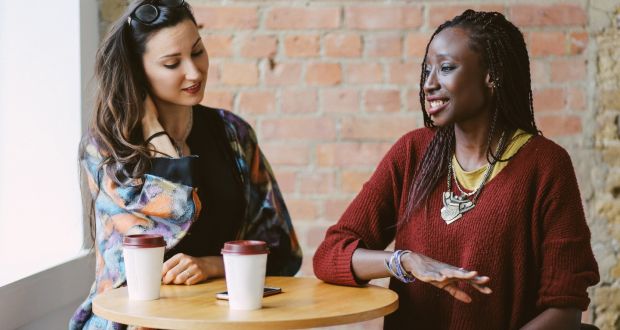 Ask any manager of an innovation hub where some of the most productive work is done and they will tell you it’s in the communal kitchen or cafe where people get the opportunity to meet each other informally and shoot the breeze. Photograph: iStock

Hands up all those who think requests by email are more effective than asking someone to do something face-to-face. If your hand is in the air, you need to think again. Recent research from academics at Cornell and Western universities has shown that a verbal request is 34 times more successful than one by email.

“We have found that people tend to overestimate the power of their persuasiveness via text-based communication, and underestimate the power of their persuasiveness via face-to-face communication,” says Cornell’s Prof Vanessa Bohns, whose study with Prof Mahdi Roghanizad of Huron University College in Canada was recently published in the Journal of Experimental Social Psychology.

Prof Bohns is an expert in organisational behaviour while Prof Roghanizad is assistant professor at Huron University College’s Department of Management and Organisational Studies, and their studies have shown that asking for something in person is significantly more effective than electronic communication. “You need to ask six people in person to equal the power of a 200-recipient email blast. Still, most people tend to think the email ask will be more effective,” Bohns says.

So why do people think of email as being so effective when it clearly is not?

“In our studies, participants were highly attuned to their own trustworthiness and the legitimacy of the action they were asking others to take when they sent their emails. Anchored on this information, they failed to anticipate what the recipients of their emails were likely to see: an untrustworthy email asking them to click on a suspicious link,” Bohns says.

“Indeed, when we replicated our results in a second study, we found the nonverbal cues requesters conveyed during a face-to-face interaction made all the difference in how people viewed the legitimacy of their requests, but requesters were oblivious to this fact.”

In a nutshell, human interaction still trumps electronic communication if you really want to have an influence over someone or make something happen. More conversations (about work not social chit-chat) and fewer emails and texts can make the working environment both more effective and a friendlier place to be.

So why does the “friendly” bit matter? Because people work better and are more satisfied if they get on well with those around them and have like-minded peers within the organisation. Interestingly enough, even those weaned on technology, such as Generation Z and the Millennials, say they prefer interpersonal communication to email, text or phone.

In many organisations, electronic media has become the primary method of communication, with colleagues sitting a few feet apart sending each other emails rather than having a conversation. Some blame this on the shortcomings of open-plan offices, where interactions can be overheard and people end up whispering on phone calls to avoid disturbing their neighbours.

One solution is to create easy-to-access breakout spaces where people can step away from the operations hub to talk. This matters because only a tiny fraction of a message – less than 10 per cent – is carried by the words. This compares with over 55 per cent for other cues such as facial expression and body language, and may explain why emails and texts can often fall flat, be misinterpreted or cause confusion.

The other thing that happens when we communicate face-to-face is an unconscious sympathetic response whereby the person you’re talking to automatically relates to or empathises with what you’re saying. This helps shape their responses – for better or for worse – and creates a much deeper exchange and feedback than you could ever get by text or email.

“If your office runs on email and text-based communication, it’s worth considering whether you could be a more effective communicator by having conversations in person,” Bohns says. “It is often more convenient and comfortable to use text-based communication than to approach someone in person, but if you overestimate the effectiveness of such media, you may regularly and unknowingly choose inferior means of influence.”

Even the big tech companies whose whole existence is predicated on communications technology don’t rely on it totally. Google has its cafes where employees are encouraged to mingle and share ideas, while Facebook has standing desks so people can easily see each other.

Ask any manager of an innovation hub where some of the most productive work is done and they will tell you it’s in the communal kitchen or cafe where people get the opportunity to meet each other informally and shoot the breeze. Ditto with water coolers.

In 2013, Yahoo’s then newly appointed chief executive, Marissa Mayer, abolished the company’s working from home policy in order to step up collaboration between employees to make the organisation more innovative and rescue its falling share price. Needless to say, the decision was highly controversial. Some saw it as regressive and a kick in the teeth for flexible working.  Mayer insisted she was doing what was best for Yahoo rather than making any judgment on home working, and she is not alone among the tech company heads making this call.

IBM was once a pioneer of working from home, but last year it did a volte-face and hundreds of workers suddenly found themselves having to report for duty at a designated site or find a new job. One of the main reasons for the decision was to have faster response times and to benefit from the creative buzz and the power of people working together.