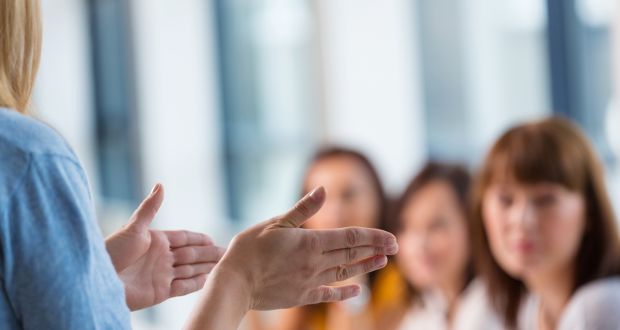 Group of smiling women attending a training. Focus on the female teacher’s hand.

Business schools need to shift their thinking or risk becoming irrelevant. That’s the view of Google director Brian Glaser, who oversees executive development at the 88,000-person strong multinational which employs about 7,000 people in Ireland. (About half this number are contract staff.)

Glaser was speaking to The Irish Times in advance of his visit here for the Google-run Compass Leadership Summit next week on the theme of “Courage”. This is a gathering of 360 current and future female leaders who will hear from some of Google’s most senior managers about why courage is going to be one of the attributes future leaders will need to prosper in the fast-changing world of work.

“There’s very little leadership taught on MBA programmes,” Glaser says. “There’s a lot of focus on acquiring technical skills and lots of cerebral input, but the balance between teaching technical and leadership skills needs to be a lot closer.

“Teaching leadership is a movement not a programme which is why we’ve moved away from the classroom at Google. We’re now putting much more emphasis on experiential learning.” In practice Glaser says this involves initiatives such as taking those being trained in leadership (roughly 3,000 a year) out into organisations dealing with very difficult problems but which have just a fraction of the resources a big company would have.

Glaser, an organisational psychologist by training, is the driving force behind the Google School for Leaders. It was set up just over a year ago with the aim of building a more “fit for purpose” leadership culture within the company.

“We want to value leadership excellence as much as product excellence so, within the school, we have a couple of different areas,” Glaser says. “For example, we scan world and work trends to really understand what they mean for leadership and then we try to create new practices for our leaders that don’t exist today.”

One of Glaser’s preoccupations is the way work is changing and the impact this will have on how leaders behave. Underpinning this are world trends such as increased urbanisation, population demographics, sustainability, the gig economy and winning the wallets of the next big wave of consumers who will spend an estimated $30 trillion on goods and services.

“We know work is going to reshape and there are a few key trends we have been focusing on,” Glaser says. “The first is the rise of the ‘everywhere worker.’ Nearly a quarter of youth will spend their lives working for multiple organisations. The question this raises for leaders is how to create a culture that is open enough so freelancers can contribute without having to ‘own’ them? Having people that come and go completely changes what we mean by engagement.

“The second is around automation as it will displace jobs but create others. So the question for leaders is how do we create organisations ready for jobs that have not even been invented yet and how do we ensure people have the skills needed in the future?”

Glaser believes the other big change that will continue to gain momentum is the “deconstruction of hierarchy”. As a data-driven company, he says Google has had to shift its thinking about where knowledge resides in the organisation and that this is a phenomenon that’s going to affect most companies in the future.

“We’ve had to think about where wisdom and great ideas live within Google,” he says. “In many organisations it’s assumed that the people at the top know the most but, given that technology like AI is going to become more pronounced, knowledge will live everywhere in the organisation. The question for leaders is where do I need to be connecting to to get all the information I need to pick the right next step forward? Hierarchical structures aren’t going to work like they did before.”

In Glaser’s view, companies that want to be future proof need to be thinking less about skillsets and more about mindsets.

“MBA programmes and big corporations with their own universities teach people how to become better at something through classroom-based learning and that’s really important when you’re in a situation that’s predictable,” he says. “But it doesn’t work in increasingly complex times as we don’t have a script for how to handle these novel situations.

“In order to help leaders prepare, we can’t just work at improving competency. We have to help them change their mindset as in their world view, their assumptions and their values. If we can shift how we think about some of our most deeply held assumptions, we can be much more effective at handling the complex situations we find ourselves in.”

Glaser says the process of mindset change is under way at Google which has come up with six changes it thinks will future ready its leaders. These include self-reflection, expediting trust, getting comfortable with “not knowing” and greater power distribution.

Glaser stresses that these shifts are not Google specific. “They’re applicable regardless of industry or company size,” he says. “The meta point is that we need to rethink how we’re developing leaders for these ever-changing times and a lot of it isn’t about what we’ve done in the past.

“If you want to get work done through people, we need to change how we think and that goes for pretty much any manager or leader.”