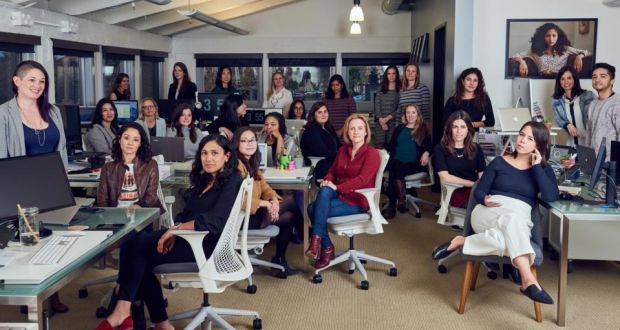 Members of the staff of Lean In, the organisation founded by Sheryl Sandberg, in Palo Alto, California. Photograph: Jessica Chou/New York Times

The door to the Lean In office in Palo Alto has Sheryl Sandberg’s name on it. The email addresses for Lean In employees bear her initials. And millions of dollars in funding every year for the women’s empowerment organisation comes from her.

But inside, surrounded by wall art reminding women to be bold, the Lean In staff has a singular message: Sandberg now has little to do with the group she founded.

“I don’t want to take anything away – how could I? – from Sheryl as the inspiration for the work that we do,” said Rachel Thomas, president of LeanIn.org. “But the book came out six years ago. It’s become less and less about Sheryl with every passing year.”

The sentiment extends beyond Silicon Valley. “Sheryl’s not really Lean In,” said Emily Schwarz, who runs Lean In Atlanta, a group of about 2,000. “We are Lean In.”

This is a startling change for an organisation that still has Sandberg’s face pop up when you scroll over the About Us tab on its website; as recently as October, she was the lead author of a Lean In-branded essay in the Wall Street Journal. It coincides with a radical shift in perception of Sandberg in her day job, as Facebook’s chief operating officer.

In recent weeks, Sandberg’s work at Facebook has been the subject of damaging headlines, from her slow response to Russian manipulation of Facebook to the way her team went on the attack against critics. Pundits have called on her to resign. Now, the Lean In movement is trying to figure out how independent it can actually become from the Sheryl Sandberg brand.

Sandberg’s workplace feminism revival began with her 2013 book Lean In: Women, Work, and the Will to Lead. Research she popularised at the time – about how women do not negotiate as strongly as men do for raises, about how posing like Superwoman in the bathroom can help women stand more authoritatively for a presentation – is now mainstream. Her phrases became part of the lexicon.

But it was always going to be tricky to have a feminist movement led by a billionaire corporate executive. Now jabs at Sandberg make some crowds cheer.

“It’s not always enough to lean in,” Michelle Obama said onstage in Brooklyn this month, while promoting her memoir. Using an expletive, Obama added that Lean In stuff “doesn’t work all the time”.

But Sandberg’s message largely won over the feminist mainstream, and she became one of its iconic leaders. According to the organisation, more than 40,000 Lean In Circles now meet regularly around the world.

Today, the staff of Lean In works in the Sheryl Sandberg & Dave Goldberg Family Foundation office, which is named after her and her husband, who died in 2015. Sandberg still hosts Lean In Circle leaders at her house.

But what has changed is that some of those leaders and even friends of Sandberg’s are playing down her role and positioning her as a peripheral character to the movement.

“From the very beginning, Sheryl drew people in,” said Deborah Gruenfeld, a professor at Stanford and a co-director of the university’s executive program in women’s leadership. “But I don’t think of her as all that central to what’s happening right now.”

Alexa Crisa, a digital strategist who leads Lean In Atlanta alongside Schwarz, told me: “We don’t work at Facebook. We work with Lean In. We only ever even mention who Sheryl is to explain why her experience is relevant to women. That’s where it ends to us in terms of the mention of Sheryl.”

Allen, in Dayton, said: “We’ve taken this thing, and we’re driving it.”

These women were ones Lean In suggested I call.

Most anyone not on its list had a different take. Gia Punjabi, a senior finance analyst at Levi Strauss & Co, founded a Lean In Circle in San Francisco in August 2017. She said she had noticed a recent drop in interest and that she suspected it was tied to Sandberg’s changing brand.

“At the end of the day, Lean In is something that’s integrated with Sheryl’s name,” Punjabi said. “You can’t know one without the other.”

Many in Sandberg’s corner argue that the news coverage of her role at Facebook has been unfair. They say it is sexist and focused more on Sandberg than on Mark Zuckerberg, Facebook’s founder and chief executive. Some I spoke with called the claims that she was involved in nefarious behaviour false news.

“It’s starting to sound a little bit like a witch hunt,” said Nuala Murphy, the founder of Lean In Belfast in Northern Ireland and chief executive of Moment Health, a health technology start-up.

One chilly day in November, I visited the Lean In office, in an open-air shopping centre in Palo Alto. There, I met Sandberg’s longtime friend Thomas.

“Has Sheryl inspired a lot of what we do here? Of course,” Thomas said. “But it’s really grown way beyond Sheryl.”

She added that moving beyond Sandberg’s name was always the agenda for Lean In and was what Sandberg had wanted. (When I later called another founding member of the Lean In team, she laughed and disputed that characterisation. Sandberg is the organisation’s sole source of funding, and no other figures have stepped in to take her place.)

We circled back to Sandberg’s work at Facebook. Wasn’t it always risky, I asked, to have someone leading such a large company also leading a movement fighting for workplace equality?

“I’m curious,” Thomas said. “You’re a smart, engaged woman on all of this – why is that hard for you?”

It’s hard, I replied, to reckon with the idea that we have taken life and career advice from someone who could be building something that’s not good for the world. For a beat, Thomas sat silent and looked right at me.

She later brought up a study, which she wanted to make clear was apropos of nothing and was part of an “intellectual conversation” about how we perceive women in power who do something bad.

“Women candidates had an edge out of the gate because people assumed that women were more ethical,” she said. “But if women did something that was perceived as less ethical, the fall was –.”

Thomas stopped herself and did not finish the sentence. – New York Times