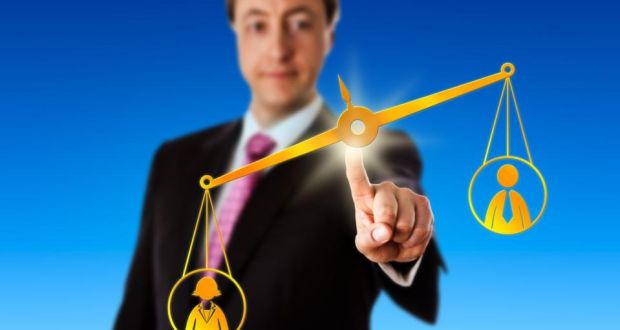 The Central Bank said the data “continues to show a pronounced gender imbalance at board level and in revenue-generating roles”.

Fewer than half of Irish women believe their employers are doing enough to improve gender diversity, according to a survey by professional services firm PwC.

The research, published to coincide with International Women’s Day, also revealed that two-thirds of Irish women are nervous about the impact of starting a family might have on their careers, compared with 42 per cent globally.

The research comes in the wake of a Central Bank report which shows that the the number of women who occupy client-facing or revenue-generating roles in the Irish financial services sector is “significantly lower” than in control functions such as compliance risk, and audit.

The PwC research found that a third of Irish women also felt taking advantage of work-life balance and flexibility programmes had negative career consequences at their workplace.

Amid a series of reports about gender pay gaps and glass ceilings for women, the survey suggested that 82 per cent of women globally were confident in their ability to fulfil their career aspirations and 73 per cent were actively seeking career advancement opportunities. Confidence levels in Ireland were slightly lower at 77 per cent.

Conversely, the study revealed many women did not trust what their employers were telling them about career development and promotion; or what helped or hurt their career.

Some 45 per cent of women also believed an employee’s diversity status – gender, ethnicity, age, sexual preference – could be a barrier to career progression in their organisation.

Equally, 58 per cent of women identified greater transparency as the critical step employers can take to improve gender equality.

“Although CEOs recognise the importance of being transparent about their diversity and inclusion programmes to build trust, the message isn’t universal and strong enough,” the report said.

This means offering staff a clear understanding of the expectations on both sides of the employment equation, including information about career progression and success, and open conversations with employees on where they stand and what is expected of them to advance.

According to PwC, transparency means offering staff a clear understanding of the expectations on both sides of the employment equation, including information about career progression and success, and open conversations with employees on where they stand and what is expected of them to advance.

The Central Bank report is based on analysis of more than 3,600 applications it received in 2017 for approval to occupy senior roles within regulated firms in the Republic. The report breaks down the applications for regulatory approval by gender, age and country of origin.

It has previously produced a breakdown by gender of applications received in the period 2012 to 2016.

In the banking, credit-union and asset-management sectors there were increases of between 5 and 6 per cent in the proportion of women being offered senior level roles in 2017.

However, due to a disimprovement in the securities and markets sector, which has the largest number of overall applications, there is no change from 2016 in the headline figure of 22 per cent of senior roles being filled by women.

The proportion of female applicants ranged from 19 per cent (securities and markets) to 35 per cent (credit unions).

The Central Bank said the data “continues to show a pronounced gender imbalance at board level and in revenue-generating roles”.

At board level there were small increases in the number of female applicants for the most senior roles compared with previous years, but imbalances remained “a cause for serious concern”, the regulator said.