Imposter syndrome: A fraudulent feeling that’s no respecter of rank 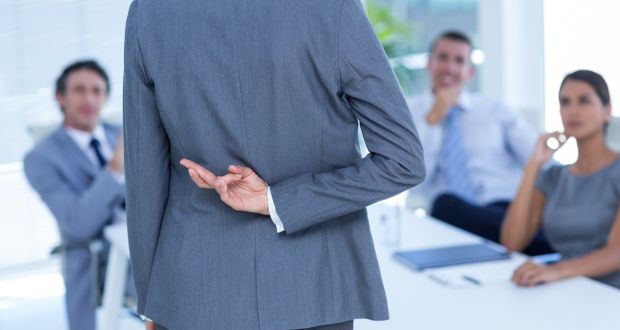 “Business leaders are usually strong individuals with considerable self-belief. Little about their often super-confident behaviour suggests they ever have had a moment of doubt.”

Getting to the top is the ultimate goal for most career-minded individuals. But how many stop and consider what it might be like when they actually get there? The demands of the job are one thing – but there is also the whole psychological impact of being in charge.

Business leaders are usually strong individuals with considerable self-belief. Little about their often super-confident behaviour suggests they ever have had a moment of doubt. But peeling back the façade reveals a different story. Imposter syndrome is never far from the surface, and it shows scant respect for rank.

Australian academic and expert on self-management Hugh Kearns, who has been researching the phenomenon for more than 20 years, was in Dublin recently to address an audience at DCU. The author of The Imposter Syndrome, he says successful people often feel like frauds because they believe they have misrepresented themselves despite objective evidence to the contrary.

“Imposter syndrome is when imposter feelings become more persistent and have an impact on how you think, feel and behave,” Kearns says. “Many of us are waiting for that tap on the shoulder, or for someone to come along and say, ‘We need to have a chat’.

“If you’ve ever had that feeling, you’re in good company. Lots of people experience it. The feelings can be powerful, and the person may be convinced they are a fraud. What do Meryl Streep, Facebook chief operating officer Sheryl Sandberg and Nobel Prize winner Gabriel García Márquez have in common? At various stages they have all felt like frauds or imposters who don’t have the skills or abilities other people think they have.”

Kearns says these feelings often have their origins in childhood experiences. Being rewarded for being perfect, growing up with a fear of failure, being overpraised or even taught to fear success can all shape how we behave as adults.

“For imposters, making mistakes is bad, very bad. It is the time when you risk being exposed,” Kearns says. “So somewhere along the line, you picked up the belief that mistakes are not OK and, since mistakes are a part of life, you have a problem and feel like an imposter.”

The negative fallout from the syndrome can start when executives who are unable to control their often irrational fear of being found out start acting defensively. In practice, this can unfold in ways that undermine both their relationships with senior colleagues and how their business is run.

For example, a manager who is scared of looking/sounding stupid may avoid frank conversations and never get a true picture of what’s going on. Another example is someone so worried about underachieving that they consistently take poor risks. The flip side of this coin is the person so paralysed by their insecurities that they are completely risk-averse.

The problem with fear is that, left to fester, it can get a grip. C-Suite executives (top managers whose titles often begin with “chief”) who are supposed to have all the answers can find it very difficult to be vulnerable and utter the words “help” or “I don’t know”.

The idea of not being in control is anathema, so they put up a wall and get stuck in a cycle of poor decision-making, overwork and perfectionist nit-picking that can ultimately ruin their business.

On top of this they are storing up potential mental health issues if they never relax, and there is constant tension between how they see themselves and how they portray their persona to others.

While many of us have deep-seated fears, Kearns suggests cutting ourselves some slack by accepting that feelings are not facts.

“When you feel something strongly, you are inclined to believe that is it true. But it may not be true. Cognitive behavioural coaching can be a useful strategy for sorting out feelings and facts,” he says.

Another self-help option worth considering is coaching or mentoring, where fears can be expressed in a non-judgmental environment to a neutral listener. These can be either personal or professional fears, or both. If you are already a senior executive, it may be worth seeking out an éminence grise, with first-hand experience of the loneliness that can go with the top job, to be your sounding post.

Kearns’s advice is to relax and accept that imposter feelings are entirely normal. He also suggests becoming more self-aware and starting to recognise your imposter moments before they sabotage you. Judge yourself by objective standards. Write down what you would consider to be a “win” on a given task, and whether you have measured up. If you have, walk away and be pleased about it. Don’t start moving the goalposts.

Mistakes are almost guaranteed to lead to imposter feelings, he says, so work on developing a mental attitude that lets you fail – fume if it makes you feel better – and then move on.

And imposter syndrome doesn’t just affect senior executives, Kearns says. “It affects people at all levels, from new staff through to top managers. You’d imagine that as you get more senior it would go away but as staff get promoted the standards and expectations keep getting raised – and so do the doubts.

“It’s quite common when staff first get promoted to a managerial role. They may have been very competent in their front-line role but then they move into a new role where they may not be very competent at the start.”