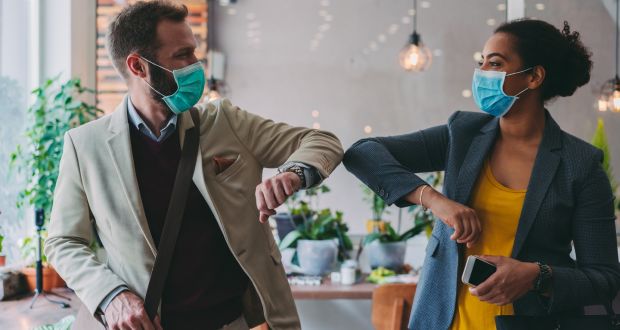 People returning to face-to-face deal-making and discussion need to draw on all their reserves of empathy. Photograph: iStock

Royalty may have shaken a stranger’s hand for the last time. Even if state occasions resume, and even if others become comfortable again with a palm-to-palm greeting, it will be a brave palace flunkey who advises a 94-year-old monarch like Britain’s Queen Elizabeth with a 99-year-old consort to risk it.

You don’t have to be a royal to have felt this strange shift in the codes of human connectivity and sociability.

The last business dinner I attended before lockdown was arranged to discuss trust. Guests included entrepreneurs, philanthropists, financiers and a senior clergyman.

As we convened, we reached an informal understanding we would not shake hands. But during the dinner debate, one late arrival pointed out that the fact we had not greeted him in the traditional way, even though he had washed his hands first, must have meant we didn’t trust him. Everyone sheepishly shook hands on parting.

Since lockdown, I’ve noticed how the inability to reinforce a hello or goodbye in the traditional way feels like a breach of etiquette.

Handshakes will return, at least among people who know each other. Until the discovery of an effective vaccine, though, the handshake will probably also continue to be a reliable vector for resurgence of Covid-19, as hugs and kisses have been already in tactile Spain.

Within the world of more formal business or diplomatic meetings, centuries-old norms of behaviour are changing, shoved aside by blunter health and safety protocols.

Capricia Penavic Marshall feels the change more than most. As chief of protocol for four years of Barack Obama’s administration, her hand was almost always the first shaken by heads of state as they stepped out of cars or aircraft on official visits.

In her new book Protocol – an etiquette guide crossed with a handshake-and-tell memoir of her red-carpeted career – she lists five “non-negotiable Smart rules” for establishing a new connection. The S stands for “shake hands...with everyone you meet for the first time” (her emphasis).

It is not the only advice that seems redundant in an age of masks, temperature checks and social distancing. Marshall cites research by Oscar Ybarra of the University of Michigan and others showing that even short bursts of social interaction promote cognitive functioning. “Socialising,” Marshall writes, “is, in essence, a great warm-up exercise...for business negotiations that require more focus and creativity.”

Marshall’s belief is that carefully orchestrated meetings, lubricated by more informal social contact, allow participants to “bridge and persuade”. Shorn of the social graces, though, such meetings risk taking place on rickety half-built bridges, undermined by a new set of heavy handed protocols about health and safety.

For those in the public eye, the only option may seem to be to avoid social contact altogether. In the past 10 days, agriculture minister Dara Calleary and EU commissioner Phil Hogan have resigned after attending a golf society dinner that allegedly breached the Covid-19 limit on numbers. More forgivably, Crown Princess Mary of Denmark had to apologise after she instinctively shook an official’s hand during a royal visit to a wildlife centre.

The solution, according to Marshall, is still to apply the rule she learned from organising summits – plan everything – and then “lean in to the challenge and be creative”. The handshakes and hugs may have gone, but there are plenty of other touchless greetings – a bow, a head-nod, the Indian “namaste” – that can replace them.

On the Washington DC social circuit, she told me, “It’s quite exciting how people are bringing others together in small groups: you get a more intimate engagement with someone, and more one-on-one time.”

Virtual interaction is evolving its own etiquette. During a recent online discussion, Jamaica’s ambassador to the US, Audrey Marks, said she hoped diplomacy would return from lockdown with the “best of both worlds...while getting back to what we all crave: more personal interconnection”.

Still, it would not take much to destroy the delicate fretwork of high-summitry described in Protocol. In 2010, for instance, Marshall arranged for the legs on the chair of diminutive Russian president Dmitry Medvedev to be lengthened so he would not be dwarfed by Obama and risk humiliation. The guardedness of the Covid era, and the increased risk of misinterpretation, could easily slide into suspicion, insularity and hostility.

People returning to face-to-face deal-making and discussion need to draw on all their reserves of empathy. When invitations are refused, engagements turned down at the last moment or handshakes rejected, it will be natural to feel affronted. Instead, Marshall says, ever the diplomat, her strongest piece of advice is: “Take no offence”. – Copyright The Financial Times Limited 2020