How returned emigrants are getting their businesses off the ground 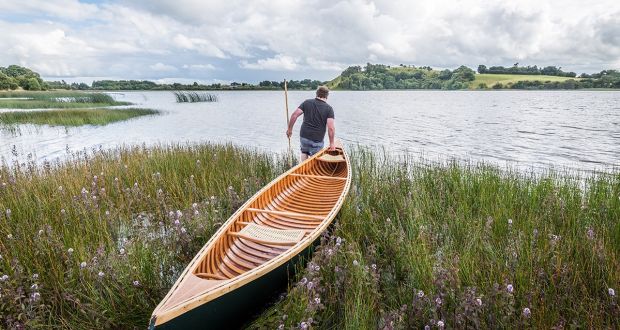 Little did Jonathan Russell know when he emigrated to Canada in 2011, that he would learn a skill while living there that would become a career.

Following a degree in furniture design and manufacturing in GMIT, Russell spent five years in Ontario working in the cabinet-making industry, doing woodwork for hotels and restaurants. As a hobby, he began canoeing.

“Canada is very outdoor oriented. I got involved in canoeing and managed to meet a guy who made Canadian canoes. When my wife and I decided to move back to Ireland, we thought it would be a nice thing to bring back.”

When the couple arrived back to their hometown of Delvin in Co Westmeath in May 2016, Russell set up his own business, Nua Canoe, making traditional wooden canvas Canadian canoes.

Through a friend, he heard of the Back to Business scheme, a new Government funded initiative to help returning emigrants to set up their own businesses. With the first event held in late November, Back to Business is still in its pilot stage. Forty-six business have been selected to take part.

Each business is placed in a group with other participants, and each group has been assigned one of six “lead entrepreneurs”, established and successful businesspeople from across the State.

The leaders offer advice and guidance to the participants, and help them set and reach short and long-term goals.

Director of Back for Business Paula Fitzsimons believes working within a group with like-minded individuals will be very beneficial to the participants.

“You’ll find that the psychological isolation of each person coming back is reduced, because they are now meeting people like themselves who are returning.

“It’s more than just people who might be good to do business with or signposting or whatever,” she says, “it’s also not feeling that you’re the only person that’s ever done this.”

The average time that participants on the programme have been out of Ireland is eight years. They have returned from a wide variety of countries to work in a wide range of businesses.

“Those who travel, be they those who’ve left Ireland and returned, or those coming to Ireland for the first time, tend to be more entrepreneurial than those who have never travelled,” says Fitzsimons.

“If you’re coming back from Australia or New Zealand or the States, you’re thinking, ‘Well now, what am I going to do?’ They have all of these new experiences, they have good contacts overseas which helps with developing export markets, and they have learned so much and seen opportunities that they may not have seen if they had stayed here.”

Each applicant was asked what they found to be the barriers to establishing a business in Ireland.

“The number one barrier by a mile for this returning group is their lack of professional networks, how their network has gone soft,” Fitzsimons says.

Tracy Armstrong from Moate, Co Westmeath is a participant on the scheme with her business Ko Kombucha. She and her husband had been living in the UK for six years when they decided to move back to Ireland and set up their business here.

“We were deciding should we stay or should we go, and then Brexit happened and that was the final nail in the coffin for us that made us think, ‘okay we definitely want to move home’. So we came home to start the business.”

Ko Kombucha produces a drink called kombucha, “a healthy alternative to soft drinks and to alcohol”. Armstrong has received funding and support from her local enterprise office, and is pleased with how Back to Business has been going so far.

“It’s really inspiring to know there are events like this for entrepreneurs, and that entrepreneurs are wanted and needed in Ireland,” she says.

It’s great to be in the room with 45 people who have this shared experience, not to feel like you’re the only ones doing it, to know that the ups and downs to starting your own business are normal, and to have the advice and support of the lead entrepreneurs.”

Ko Kombucha is launching with three flavours in the coming weeks. “It’s been a rollercoaster but it’s been really good, we’re very excited,” says Armstrong.

Cian Conroy from Oranmore, Co Galway, returned from the UK in October to launch his consulting firm. He works with developers of offshore wind farms and turbine manufacturers to map out any technology, policy and stakeholder challenges that need to be overcome in order for a farm to be built.

“The market in the UK is probably about 10 years ahead of the market in Ireland, so I’ve learned a lot of the mistakes and also the positives as well from my work in the UK, how the market reacts,” he says.

“I’ve taken the best practice from what I’ve learned and am bringing it home.”

Conroy has found working with successful entrepreneurs to be very helpful, as it encourages him to improve. “It’s useful that we’re under pressure. We don’t want to waste the time of such an established business person.”

Rachel Rath from Carrickmacross in Co Monaghan is also involved with the scheme. Having lived in Los Angeles for eight and a half years, she came home to set up her film and television production company, 12 pt pictures, a month ago.

“It was always our plan to go back to Ireland,” she says. “I would have thought in two more years, but this project has kind of jump started everything.”

12 pt production works mainly with indigenous production with a modern slant, and also works as a service company for productions coming from outside of Ireland.

Rath has found it to be quite an adjustment coming back to Ireland, as her network has depleted somewhat.

“Coming back, I feel like I’m trying to reconnect with the people again and find the talent that is back on the ground. I went to Cork Film Festival last weekend, and I could not believe it, I knew four people, while before I left I would have known almost everyone. It just shows that, in the last eight years, the amount of fresh blood and talent and the energy [coming through]. The vibrancy that was there was overwhelming, so that made us think, ‘yeah, we’re setting up our company here’.”

This sentiment was echoed by one of the lead entrepreneurs on their first day, she says. “They said ‘don’t underestimate the psychological impacts of coming home, because you might not think it, but you’ve changed’. It’s really strange, it’s very exciting but it’s definitely different.”

Back for Business is in its very early days. The participants have been asked to make goals for how they see themselves in six months’ time. Fitzsimons is hopeful the scheme will allow them to see businesses through their first few years.

“If a business is likely to fail, it’s going to fail in its early days. So if we can get these over the start-up period, the first year or two, it’s much more likely that they’ll have strong foundations put in place, and that they will be able to be sustainable and grow.”