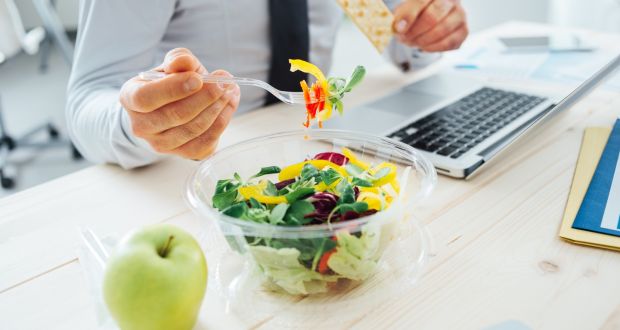 There is nothing good about lunching at your desk. It’s bad for your physical and mental health and it can be very annoying for co-workers who would prefer not to share their air space with the smell of onion.

Despite this, about two-thirds of us are guilty of regularly eating “al desko”, ignoring the advice of health experts who tell us we should move and take breaks during our working day.

The potential consequences of failing to do so are not good. Firstly, it can affect your waistline – and not in a positive way. It’s much easier to overeat if you’re distracted, and we’re not just talking a few extra calories here. Research among those who graze while watching TV showed an increase of about a third in consumption. Eating mindlessly while scrolling documents or answering emails at work can apparently have a similar impact.

The second problem with staying put is that your brain and your body don’t get a break. This is bad for your posture and your general physical and mental health. Indeed, the medical fraternity pretty much throws the book at sedentary lifestyles, pointing to raised risk factors for heart disease, cancer and type 2 diabetes, and a deterioration in mental wellbeing.

According to the Mayo Clinic, most of us don’t just have one problem, we have two: too much sitting combined with too little exercise. If you lunch at your desk, that’s a double hit.

“Lack of movement by employees during their work day is becoming an issue,” says Orla Veale, director of The Wellness Crew, which offers a one-stop-shop for employee wellness issues, from mental health and managing money to nutrition and fitness.

“Most people who have a desk job can be sitting for six to eight hours a day and don’t have an awareness of the impact this has on their health. We’re not talking about people going from a fixed desk to full marathons. Even small amounts of physical activity can reduce the associated health risks.

“A common physical side effect of this sedentary lifestyle is lower crossed syndrome,” Veale adds. “In simple terms, this means weak abdominal muscles and weak glutes, along with tight hip flexors and tight lower-back muscles. For many people this causes lower-back pain, which can impact both their work and personal lives.

“Encouraging employees to take a break and move does not just benefit them physically, it’s also beneficial for stress management. The key is to ensure that the breaks are used wisely. For example, stepping outside and breathing in the air, hydrating or eating an energy-boosting snack. For stress management, we’re finding that organisations setting aside a space in the office where people can do a short meditation to recharge the brain is proving very popular.”

Veale points out that small changes can make a big contribution to improving activity levels. “We are encouraging employers to consider standing desks, incentivised movement challenges and standing meetings, which can be implemented easily across an organisation,” she says.

A brisk walk to the sandwich bar at lunchtime will provide fresh air, exercise and even some vitamin D if the sun is shining. But getting out of the office will also give you a much-needed mental break, especially if you’ve been in constant meetings, staring at a screen or battling emails all morning.

The HSE site yourmentalhealth.ie advises “reclaiming your lunch break” in order to get re-energised for the rest of your day, while finding some calmness and moving your brain out of work mode, even for a few minutes, can reduce your stress and anxiety levels and help you to refocus.

One of the main reasons people stay at their desks over lunch is peer pressure and an office culture based on presenteeism. This is effectively a form of covert bullying and is completely counterproductive, as mentally tired workers with low morale do not give of their best. If your boss is grudging about breaks, take a late lunch and make the point that there is plenty of evidence to show that we are at our least productive between 2pm and 3pm.

US-based Redbooth develops project management software for high-performance teams and it analysed anonymised data from hundreds of thousands of workers to shed light on productivity patterns. According to its research (published late last year), we are most alert and creative between 9 and 11am. And on average, people complete the most tasks at about 11am.

Productivity drops after lunchtime and plummets after 4pm. We get most work done on Mondays and least on Fridays.

October is most people’s most productive month while autumn is their most productive time of the year, probably because there’s a big push to get things done and dusted by Christmas.