How big businesses can benefit from using coworking spaces 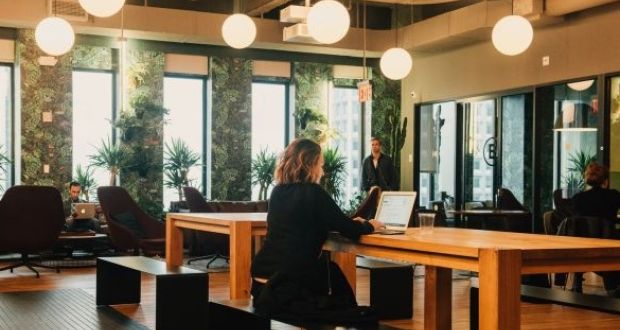 A WeWork common space in New York. The traditional practice of automatically putting people together in a central hub is coming under increased scrutiny. Photograph: Cole Wilson/The New York Times

Agile is the word that keeps cropping up when people talk about organisations being future fit. We’re told they need agile mindsets and agile processes to cope with the fast pace of change. And as this shows no signs of slowing anytime soon, they now need something else to go with it: agile real estate.

Long leases on big office buildings are not about to go the way of the dinosaurs as there will always be organisations that need all of their employees in one place. But the traditional practice of automatically putting people together in a central hub is coming under increased scrutiny.

Does everyone really need to be in the same city centre location or out of town industrial park? Would a slimmed-down HQ complemented by people working in smaller clusters elsewhere not be equally effective as well as cheaper and better for employees as it would cut their commute?

These are some of the value questions driving bigger companies to dip their toe into the growing world of coworking spaces that were once the preserve of small businesses and start-ups. Organisations such as IBM and AT&T initially put their people into shared space to expose them to the buzz of an entrepreneurial culture. That’s still the case.

However, choosing to operate from coworking hubs is also becoming a question of need, according to Louise Ponting, regional property leader for Britain and Ireland with professional services firm, EY, which expects to have about a quarter of its employees in coworking spaces within 10 years.

“The cost of real estate is a driver to some extent but the main reason is the ability of coworking spaces to complement our existing traditional sites by providing the agility our business needs,” she says.

“There is a lot of talk about the future of work and how and where people will work, and organisations will increasingly need a flexible real estate function to provide part of the answer. The ability to respond quickly to change will be crucial and the traditional model of long leases is not suited to this.

“Coworking spaces are one solution because they come in different shapes and sizes and can generally be scaled up or down to suit the number of people you need in a particular place at a particular time. Coworking space can get you closer to your clients and tick other boxes such as allowing people to work closer to home.”

Ponting stresses that for coworking spaces to work, they need to be fitted out and finished to the same high standard as a company’s HQ with no drop in comfort levels or amenities.

“Our requirements are pretty specific so we try and partner with people who understand this and can provide surroundings that are in line with employee expectations and the image of a well-known brand,” she says.

Jean-Yves Huwart, the founder and chief executive of Social Workplaces which organises an annual European coworking conference, predicts that the number of corporates buying into the idea of coworking space is only going to grow. As recently as 10 years ago, he says, coworking was a novelty and it was a struggle to find examples. Now there are an estimated 22,000 coworking spaces worldwide accommodating about 2.2 million people.

“Technology has made coworking much more feasible,” he says. “If you work with a laptop, you don’t need a specific office with a specific desk so we need to be thinking differently about working spaces.

“What we’re talking about is service-based workplace provision and, as it evolves, we are seeing bigger spaces with bigger teams emerging.”

Huwart likens the disruption of the traditional working space model to what happened in the IT sector when it moved from having fixed assets into the cloud.

Reducing overheads, particularly in areas with expensive property, is encouraging more companies to think about where people work and being able to offer jobs with easy commutes has also become a big recruitment lure. “Coworking can offer larger organisations a way of retaining staff because very often younger people, in particular, don’t want to drive for two hours a day to an office in a business park. They want to be able to use public transport,” Huwart says.

The most recent European coworking conference, in Warsaw, drew 600 delegates from around the world, including Northern Ireland-based businessman, Patrick Murdock. He runs The Hub in Newry, a group of coworking sites on the main route from Belfast and Dublin. The Hub is home to about 20 businesses ranging in size from solo workers up to about 50 people and includes a group of employees from a Dublin-based company.

“One of the most interesting trends that emerged at the conference was how large companies now see coworking as a key strategy in attracting and retaining talent,” Murdock says. “We heard from the huge German chemicals company BASF about a pilot project it is undertaking in Berlin to build a coworking satellite office network to ensure employees no longer have to travel long distances to work.

“We are definitely seeing a trend whereby companies are asking themselves serious questions around location, not least because the penny has dropped that not everyone needs to be in a head office to do their job.”