Getting to the Core of damaging business problems 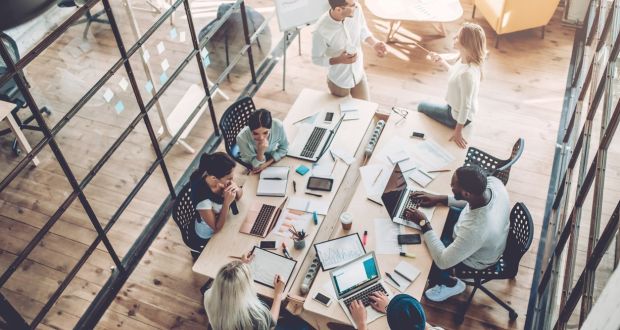 In January this year, advertising and marketing communications company Core moved into 24,000sq ft of customised office space in Dublin’s Windmill Lane. The firm has more than 300 employees and part of the reason for its relocation was to put people together in one place to improve collaboration, efficiency and productivity.

The business case for the move came first. Core is a major player in the media buying and advertising sectors here with billings of about €220 million. It developed its five-year €7.5 million transformation plan in response to industry changes. As part of the reboot, it also took the opportunity to make some fundamental alterations to working practices.

Under the new rules, there is a greater respect for people’s time and it is no longer acceptable for colleagues to wander into each other’s offices unannounced or to interrupt someone if they are in the middle of a task.

Company emails are not to be sent before 7am or after 7pm. And there is no longer an expectation that employees should be “on 24/7” and constantly checking their work texts and emails when they’re at home.

Clients can still make contact if there’s a problem and the company will still respond if there’s a crisis. However routine interactions now happen within more defined time blocks and everyone is expected to put a delivery delay on work emails written outside of the curfew.

So, have clients and employees respected the new rules? “In the main yes,” says Core’s deputy chief executive Aidan Greene. “I think everyone has recognised that the demands on people are immense and that there has to be more respect for everyone’s work-life balance.”

Core, which is owned by its management and the French multinational advertising and public relations group Publicis, had been planning its big move for some time. Once a suitable space was identified, its acquisition and the subsequent fit-out and relocation all happened within 12 months.

At the same time, the new working practices were being introduced. Core brought in US company, Agency Agile, (which specialises in teaching organisations how to “increase team velocity”) to help change its mindset and processes.

Successful collaboration is at the heart of what we do

In the new order, for example, no internal meetings are scheduled between 2.30pm and 5.30pm and people have blocks of time during the working week where they are guaranteed no interruptions.

There is also a new meetings protocol designed to make them more targeted and efficient.

“Successful collaboration is at the heart of what we do and you need a physical and a mental environment that is conducive to it,” says Greene.

“Our industry and how clients interact with it and with us is changing fundamentally and we needed to change to be fit for purpose.

“Things have gone well beyond where we provided a creative and media service. Clients now want a great deal more from us – in short, answers to business problems. This means being able to draw quickly and easily on expertise and competencies from different practices within the business – media, creative, research etc.

“Traditionally, these different practices tended to operate in silos and that model doesn’t work any more. You need all your client-facing people in one place working together. In turn, this means having your space configured in a way that encourages and simplifies collaboration.

“You need lots of small breakout areas and smaller meeting rooms as well as bigger spaces and a ‘town hall’ area that can accommodate the whole team when needed. We have also introduced Colab, a designated area where multiple practices come together to focus on a single problem,” adds Greene.

Developing the company’s five-year business strategy, planning the changes in working practices and orchestrating the physical move took around two years, says Greene. The transformation plan was launched to staff in 2017 and more than 200 employees moved into the new building about a year later.

“The change that people seem to appreciate most is the rule about no work emails between 7pm and 7am,” Greene says.

“I think this put discipline on everyone and has helped to address the imbalances that had gradually crept into our working lives.

“The period of time during which people felt it was okay to contact colleagues about a work matter had become longer and longer and it meant that you were never completely free because you felt you had to keep checking your mail. This is no longer the case and I think it’s the single biggest lasting effect of the changes,” he adds.

Core now operate a system that actively protects people’s time. A colleague or manager can see if someone is available, as employees use a green, red or yellow indicator to show their status. “I think this has put manners on everyone because it’s become acceptable to say you’re not free to talk at that precise moment,” Greene says.

“Having the right space has also made a big difference to the efficiency of large staff gatherings. We can book the lobby just like any other meeting room and usually have a full team meeting there every eight weeks. Before this we were constantly looking for locations that could fit everyone and then you had the issue of getting them there.

“The move has greatly improved communication within the company. It has increased our ability to collaborate and to get the best out of our people for our clients and that’s really what it’s all about. Advertising is worth nothing unless it delivers a result.”