Gender balance in boardroom to be targeted by law 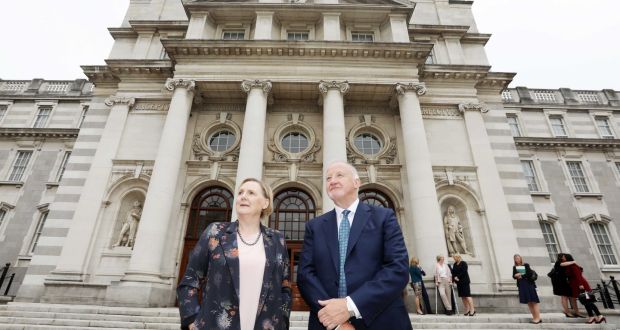 Better Balance for Better Business’s Brid Horan and Gary Kennedy: group was established in 2018 when only 18 per cent of directors at top Irish publicly quoted companies were women. Photograph: Leah Farrell

A group convened by the Government to examine the reasons for the low proportion of women on corporate boards will launch its first report in the coming weeks, Minister of State David Stanton has indicated.

Mr Stanton, who is leading the introduction of gender pay gap reporting legislation at the Department of Justice and Equality, told the Dáil that it would explore measures and targets to improve gender balance in the boardroom.

The group will also investigate the gender imbalance in favour of men across senior management levels in Irish companies “in due course”.

The Better Balance for Better Business group, led by former ESB deputy chief executive Bríd Horan and Greencore chairman Gary Kennedy, was established last summer at a time when only 18 per cent of directors at top Irish publicly quoted companies were women. It is expected to set out “progressive targets” until 2023.

Mr Stanton was speaking as the Gender Pay Gap Information Bill reached its second stage in the Dáil last week.

A return to the Government’s lobbying register shows that business group Chambers Ireland wrote to Mr Stanton as well as Minister for Justice Charlie Flanagan in the early part of 2019 to convey its desire for “a more business-friendly approach” to the legislation.

Mr Stanton said this gave smaller companies and administrators “an adequate lead-in time” and “an opportunity to learn”.

However, Chambers Ireland has called on the Government to “focus on larger companies” and rethink its application to businesses with 50 or more employees, arguing this would be “counterproductive” and create too much of an administrative burden.