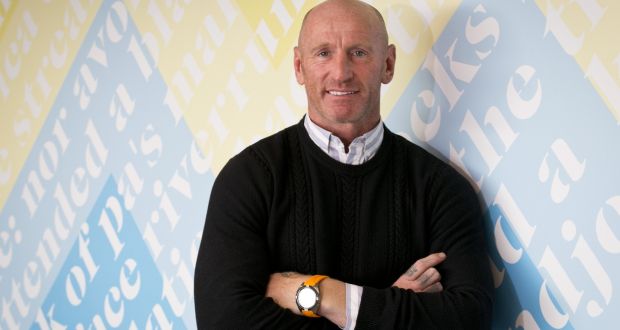 “People used to come from society to the workplace and had to hide who they were. Increasingly they now feel safer in the workplace than they do in society,” says Gareth Thomas

If someone was ever in a good position to discuss toxic masculinity and how it can affect every aspect of your life, including work, it must be Gareth Thomas.

The former Welsh rugby player is in Dublin to talk on the subject less than a week after disclosing that he was recently the victim of a homophobic attack by a teenager in Cardiff.

Thomas, who broke taboos in sport in 2009 by revealing he was gay while still a player, has won plaudits for his response to the hate crime, which included meeting with his attacker, rather than simply pressing charges against him.

The Welsh, French and All Black rugby teams have opted to wear rainbow laces in international games over recent weeks in support of the former Welsh and British/Irish Lions captain, while he has also received countless heartfelt messages from the general public.

“The response from the rugby community and from the public in general has been amazing. There has been overwhelming support. So much so that it took me back, to be honest,” Thomas says.

Six days after the attack, we meet at the Irish headquarters of online recruitment company Indeed, where he is due to speak to employees about his career and his work as an LGBT campaigner.

Thomas says many people underestimate how often hate crimes occur and adds that many people were surprised he didn’t hit back.

“It has been very flattering and humbling for me as an individual to get such a reaction, but I like to think that it isn’t really being targeted at me but at the communities who experience hate crimes. I hope they take away the positives from this because, if you look at the bigger picture, they have to put up with these incidents and don’t get the publicity I’ve received,” he says.

It’s not unusual to see former sporting legends invited into companies to talk about their careers and how working as a team can lead to success. Thomas likes to go beyond the banal parallels between high performance in sport and business. He says, for example, that work can be a refuge for those who are in any way different from the “norm”.

“People want to work in an environment in which they can be themselves and it can be a safer environment, which can empower them. This is a good thing, given how much time they spend at their jobs,” he says.

“Most companies want to create a diverse working environment so as to get the best people possible to come and work for them. There are clearly others who are just ticking boxes but they are easy to spot,” he says.

Thomas says that, increasingly, companies are looking for staff to bring their true selves to work, which is in complete contrast to the way things used to be.

“People used to come from society to the workplace and had to hide who they were. Increasingly they now feel safer in the workplace than they do in society,” he says.

With many high-profile sports people engaging with the corporate world, Thomas notes that corporate culture can teach the world of sport a thing or two – including the need to promote diversity.

I would love to say that things have changed in the world of sport ... but there is still a long way to go

As one of the first sportspeople to “come out” while still playing (along with Donal Óg Cusack and a very few others), Thomas experienced both support and abuse, the latter mainly from fans.

Since his retirement in 2011, he has campaigned for greater diversity and inclusion in the sporting world, including with his much-praised Hate in the Beautiful Game documentary, that aired last year.

“I would love to say that things have changed in the world of sport, especially as my experience in rugby was so positive, but there is still a long way to go,” says Thomas.

Asked if a lack of diversity was stopping talented players from taking up a career in sport. Thomas’s response is blunt and unrepeatable.

“If I were a kid growing up now and had the best skills and talent as a footballer, but realised I was in someway different, would I go into sport? I’d look at what happened to Justin Fashanu, who was hounded by the police after coming out and who killed himself. I’d probably go and work instead for a business because of what it is doing in terms of diversity,” he says, citing Indeed.

“Football and other sports may be losing out on some of the greatest talents,” Thomas says. “If you had a big company and you looked at the statistics and realised there was no one who was ‘out’, you would come under huge pressure as a corporation to do something about it. “The sporting world lets itself down by not looking to compile statistics and do more to promote diversity.”

Later on in the day, when Thomas is talking to Indeed’s employees, he’ll describe how the fear of coming out “was like facing 35 Jonah Lomus running in a straight line at me”.

The reality, he adds, felt like the complete opposite. “Most people’s fears are far worse than the reality. You often create those fears because you have to try and justify the reasons you aren’t telling the truth.”

Thomas, whose Twitter bio proudly states “I am Welsh before I am anything else”, says his experience of living a lie by hiding his sexuality has taught him to try to live as authentically as he can. This includes trying to show there are other ways to display masculinity, including by showing vulnerability.

“Whatever I do, I’ll do as Gareth because trying to be someone or something else is not a very clever thing to do,” he says before shaking in head in despair at having referred to himself in the third person.

“I only ever wanted to play rugby, but unfortunately I had to retire so I have to challenge myself doing other things. The thing that most drives me now is in hopefully helping to create a better environment for people to be themselves.

“If what I say and do leads to an ounce of change in somebody, then as far as I’m concerned I’m doing the best I can, just as I did on the field.”