Future Proof: Rathbornes a shining light for far longer than most businesses 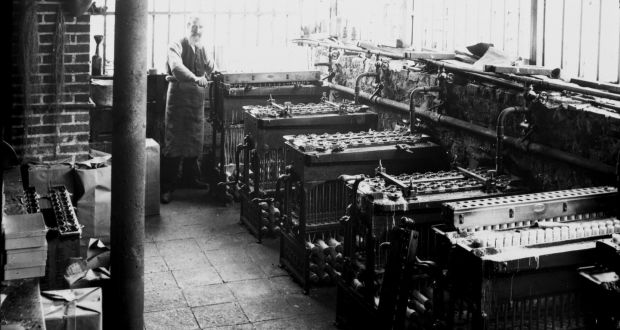 Rathbornes was established in Winetavern Street in Dublin in 1488. Rathbornes is now making waves in the luxury candle market thanks to extensive R&D and the employment of modern methods and materials

In terms of a company which has evolved to remain relevant through its history, it’s difficult to imagine one with greater longevity than Rathbornes, the candle maker, that is thought to be one of the earliest registered, and longest continuously trading businesses in the world, let alone Ireland.

Rathbornes was established in Winetavern Street in Dublin in 1488, four years before Columbus set out on his voyage to America and the year Portuguese explorer Bartolomeu Dias made history became the first European to sail around the Cape of Good Hope. The candle-making business thrived in the centuries that followed and Rathbornes lit up the streets of Dublin as well as homes and churches across the country.

In 1744, Dunsink was their main manufacturing centre, while stores and offices were located in Essex Street in the capital. In 1895, a fire gutted the factory at Dunsink. While the factory was rebuilt, many of the firm’s ancient records had been destroyed.

In 1912, Henry Burnley Rathborne gave up his interests and so the Rathborne family’s involvement in the business came to an end. In 1925 it was decided to consolidate all the structures and business into a more central position in the city at East Wall Road in Dublin Port. The company operated from this city location until 2001 before moving to its current 15,000sq ft site at Rosemount Business Park in Blanchardstown.

“When you drive down the East Wall Road, you can still see the plaque on the wall. A lot of people still associate us with the area – the location was a key identifier with the brand,” says Vincent Brady, managing director of Rathbornes since 2012 and co-director of the company along with Richard Simpson, who purchased the business in 2006.

In the 18th century, the candles were made from spermaceti obtained from the heads of sperm whales. You wouldn’t get away with that these days. Then along came ‘stearin’ which produced a much better candle and is still used in candles today”

One of the leading suppliers of church candles in the country, Rathbornes is now making waves in the luxury candle market thanks to extensive R&D and the employment of modern methods and materials to ensure that the business remains future proofed for generations to come.

“When the company was established, their candles were made from tallow – an animal render,” says Vincent Brady.

“I imagine candle-making back then was a slow and cumbersome process. In the 18th century, the candles were made from spermaceti obtained from the heads of sperm whales. You wouldn’t get away with that these days. Then along came ‘stearin’ which produced a much better candle and is still used in candles today.”

Five or six years ago, management sat down and “looked at their strengths and weakness”. As one of the country’s main suppliers of church candles “their strength was also their weakness” according to Brady, as they had only one revenue stream.

There are three main manufacturers of church candles in Ireland: “It’s a competitive space so we’ve always prided ourselves on quality of service,” says Brady. Changes in the church over the past two decades or so have had only had a small impact on the company’s business. After all, it still produces over 22 million votive lights a year.

Technological advances have naturally impacted on how labour-intensive the candle business is: “Twenty-two million votive lights is a substantial number. In East Wall, we had eight or nine people producing them. Now, we have two, while three more produce other items such as altar candles.”

The company employs 18 people in total. “Years ago, it was perceived a bit like Guinness; it would have been considered a job for life. Married couples met in Rathbornes in East Wall. There was around 140 people employed at one stage.”

Four years ago, a four-day production week was introduced. “We have a very solid production team,” says Brady.

“Our staff do all their 40 hours over four days. In an age where people move around a lot in jobs, since we implemented this, we have lost no members from our production team. It has created a huge feel-good factor.”

Brady says that as an “ambitious” company, they would have made moves into the commercial market regardless of the church side of the business. “What I’ve seen in my time at the company (he joined in 2002 as financial director) is a drop in the church sales due to fewer Masses, churches closing during the week and fewer priests etc. However, in the past seven or eight years, the church market has remained very stable for us.”

The need for innovation was driven by consumer trends, Brady says, but also by the sense that, as the oldest candle company in the world, Rathbornes should be capitalising on its expertise and long tradition of candlemaking.

Producing its more commercial range of products entailed a great deal of research. The company used focus groups and worked with various fragrance houses to perfect the end product.

“That was the most time-consuming aspect of developing the product. We find the focus groups highly benefincial and they give us great insight into producing the right product,” says Brady. “Every element of the process has been thoroughly researched. We also have strict quality control. It’s a scientific process and we have spent a lot of time trying to produce the very best candle we can.”

The company is now in year three of the “Rathbornes 1488 Beyond the Pale” candle collection range. They have also introduced reed diffusers and body products and will introduce a new range next year.

In terms of the design of the “Beyond the Pale” range, the in-house team opted for a classic, luxury design rather than something that appears overtly Irish. This premium, commercial product range now represents 20 percent of revenue.

“Part of my thinking was that I didn’t want to be reliant on one revenue stream and launching a luxury premium product was the best way around that. We wanted to export the Rathbornes story outside of Ireland and that was also a great way to do it. We are really encouraged that we are going in the right direction when we are entering overseas markets,” says Brady.

“When you run a company this old, you think of the history and the fact that you are following in the footsteps of so many people, but it’s also a challenge that when you leave here, the company is in good hands,” says Brady. “That was part of our assessment of the business several years ago – to ensure that we do that for the next generation.”