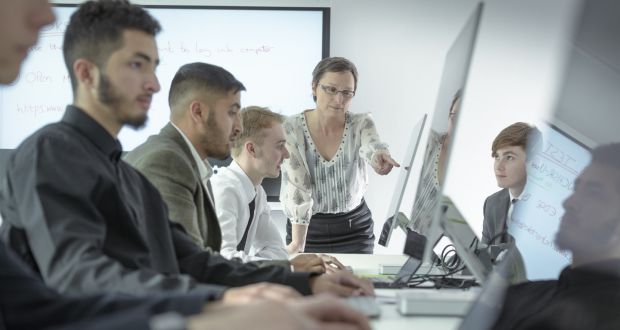 “No one needs to be ‘excited’ about anyone at work, not even an intern.”

The other day, the bosses of the Jefferies investment bank decided to write a letter to their new crop of summer interns and post it on the firm’s website.

Richard Handler and Brian Friedman told the recruits they were entering a world of “hand-to-hand combat” where they would be “fighting in the trenches” to reach “difficult and complicated objectives”.

They would have to figure out how to swim as they were tossed “smack in the middle of the action” and when they inevitably got water up their noses, they would have to “learn to deal with it”. My bet is they will.

Like the hundreds of other interns fanning out across Wall Street and beyond this month, the 166 newcomers at Jefferies were smart enough to survive a gruelling interview process for a spot that more than 3,500 originally tried for.

I assume this means they will have the brains to ignore almost everything Handler and Friedman wrote.

The duo’s first tip is a Trump-like call for the interns to treasure “tremendous flow”. In other words, they should want to be at a firm that has what he calls “an enormous amount of action”: deals, trades, ideas and so on.

But surely they already want this.

I doubt a single intern has pitched up expecting to work at somewhere like a high-street bank, learning how to deposit pay cheques. All must know they have arrived at an investment bank where this “flow” is supposed to be routine.

The bosses’ next bit of advice is even stranger: “You have to be excited about the people you met during the interview process and all the ones you are going to work with this summer.”

This is rubbish. No one needs to be “excited” about anyone at work, not even an intern.

The people the Jefferies rookies meet this summer will probably be much like those in any office. Most will be fine. Some will be dull. A few will be rotters and one or two might be admirable. To expect relentless excitement from them all is idiotic.

In my experience, one can end up working with smart, amusing, generous people in one’s career. But only if one is quite lucky.

Act as if everything you do and say is being watched, because it probably is

Handler and Friedman have more to say about excitement when they get to what they call “mission”. “You need to pick a firm that has a mission and a purpose that truly aligns with your goals and excites you,” they say.

I have never worked in an investment bank but I know a lot of people who do. I cannot think of one who has ever mentioned their firm’s mission, let alone whether it excites them.

Most go to work for the same reasons I do: they like being paid to do interesting stuff. Quite a few do not especially like what they do but are very much in favour of the substantial amount of money they earn. I would not blame any intern for wanting the same.

In fact, if I were a Jefferies intern, I would find it far more useful to read what ex-interns are saying on sites such as Wall Street Oasis, which has published a slew of veterans’ tips for this year’s “summers”.

“Put in the hours, even just for the facetime,” says one. But don’t let anyone know that’s what you are doing “or you’ll come across as a brown-nose”. Instead, find something useful to do, even if it’s boring.

Also, act as if everything you do and say is being watched, because it probably is.

This is sensible, especially if you are competing with more than 160 other pushy strivers for the attention of a lot of busy people with the power to shape your career.

I also like this suggestion: don’t ask any questions that could be answered by Google. And this: offer lots of help, but not if you have no hope of being able to provide it.

Actually, the more I look at this advice, the more I see that it applies to anyone in an office, not just the intern.

Don’t complain. Don’t name-drop. Don’t babble on your phone too much. Try to be likeable. Listen and wait for people to stop talking. Take special care at any event involving drinking.

Finally, don’t forget that if you want to stick around, you will need to satisfy the whimsical emotional impulses that drive your bosses.

For the new interns at Jefferies, I wish you the very best of luck. – Copyright The Financial Times Limited 2018