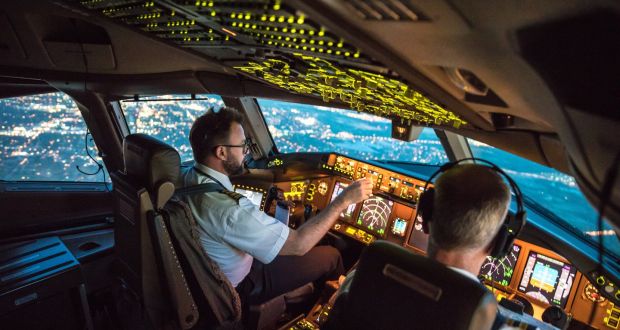 There was a golden age in commercial aviation when carriers opened the cockpit doors to those seeking a life in the skies – cadet programmes offered full training and a near-guarantee of a secure, lucrative and even glamorous future.

Even as the aviation industry grew up there was a romantic connection to days when airline captains, in crisp dark suits and golden epaulettes, rubbed shoulders with the jet-setting elite.

Much has changed. Today, concerned pilots say, their work has been sharply undermined by deregulation. As the skies broadened to fleets of low-cost airlines and pilot numbers grew, employment conditions began to change.

While many are still in secure well-paid jobs, young would-be pilots are increasingly worried about finding work after laying out enormous training fees. Some pay money to gain flight experience in commercial planes, while others sit in terminals on zero-hour contracts.

If the financial realities of flying shifted for passengers in the early 1990s, they certainly did for pilots. Just not in the same direction.

“There is nothing glamorous about getting up at 4.30am in the morning or working on Christmas day. Pilots are shift workers,” says Capt Evan Cullen, president of Irish Air Line Pilots Association (Ialpa).

The group estimates there are about 6,000 unemployed pilots in Europe today, and sees the industry as crossing regulatory lines and grinding down a once rewarding profession.

He says the modern reality is that many pilots will never be hired despite paying enormous fees for training as they are deemed unsuitable by airlines – unable to pass aptitude or simulator tests to required standards.

Civil aviation grew quickly in the second half of the 20th century. But with the end of the Cold War era military pilot training budgets were slashed, cutting off a path for entering the profession.

As cheaper money appeared, middle-class families borrowed to help their children attend flight schools – increasingly so in the late 1990s and early 2000s.

This system brought its own problems, Cullen says, with aspiring pilots spending a small fortune with no guarantees of a job afterwards.

There have also been disasters. Five years ago the Waterford-based Pilot Training College of Ireland collapsed, leaving many students out of pocket and unqualified.

It is estimated to cost about €100,000 to train as a pilot in a multi-engine piston aircraft with an instrumental rating, essentially an aircraft that can be flown in cloud. To get a job graduates generally need a rating in either Boeing or Airbus aircraft. Some will be offered full-time, permanent or fixed-contract jobs.

“That would have been [more] the case pre-deregulation. [Since then] we have a proliferation of precarious employment of pilots,” Cullen says.

“You would apply to the airline, they would put you through a selection process, and then they would refer you to a training organisation and you would pay €30,000 for the ‘type rating’ on top of the €100,000 you have already paid.”

Such significant debt brings with it the pressure to secure work, and today’s pilots are often faced with unappealing options.

One, outlined by Cullen, and pilot groups generally, has become increasingly common. Pilots take up a directorship in a company with five to eight others.

“A lot of these guys would never set foot in Ireland,” says Cullen.

Ialpa estimates that there to be about 800 such companies registered here. “This is unique to Ireland...In some countries like Germany it is illegal.”

These companies then lease out the pilots to a third-party provider, which in turn supplies the airlines, effectively allowing them to keep pilots at arms’ length.

“The majority of pilots operating in Irish-registered airlines are on contracts which are not direct employment in nature,” Cullen says.

More than one in six pilots today operate in “atypical” employment conditions, according to a 2015 European Commission-funded report carried out by Ghent University. This includes working through a temporary agency, as self-employed, or on zero-hour contracts with no minimum pay.

It found the low-fare airline model the most responsible – just 53 per cent of their pilots were directly employed, 15 per cent were self-employed, 11 per cent flew via their own limited liability company, and 17 per cent were working on a temporary agency contract.

Young pilots were the most affected. Almost 40 per cent of those in the 20 to 30 year age bracket said they had no direct contract.

A report entitled The Case for Fair Competition in Europe’s Aviation by the European Cockpit Association (ECA), an organisation representing some 38,000 European pilots in 37 countries, says deregulation is directly linked to the erosion of employees’ collective and individual rights and working conditions.

“The ground for such practices had become fertile, allowing inventive operators to cherrypick among different national regulatory regimes and uneven oversight.”

It likens the situation to the maritime industry, and cites “flexible employment” models as being of particular concern.

Pilots, says the ECA, can find themselves employed on zero-hour contracts where they receive payment only for time in the sky, with no annual leave, maternity leave or sick pay.

The “pay-to-fly” model has also emerged where young pilots pay an airline to man the co-pilot’s seat, thereby clocking up hours crucial to career progression.

The ECA has called for laws to ensure pilots are directly employed by airlines and for the banning of zero-hour contracts.

Such potential conditions are anathema to those who flew in better times. One retired captain said the cadet programme he entered at Aer Lingus was his ticket (the State carrier still trains and directly employs its own cadets today).

“Everyone wanted to be a pilot; that was one of the most desired occupations,” he told The Irish Times, requesting anonymity. “Because of the glamour associated with it at the time. It was technical leading edge. Now that’s more to do with the internet or software development.”

In his time the profession saw him move all over the world, with no worries over zero-hour contracts or self-employment. “There was none of that when I started. All of that stuff has developed in the last 10 to 20 years.”

But there are those who will play down modern pilots’ versions of a wounded profession, preferring to believe it is a perception created, even overstated, by a powerful industry lobby.

One well-placed aviation source said pilots continued to enjoy a lucrative career even if it is one that pales to its early days – itself a natural progression from expensive travel controlled and operated by a limited number of players.

“By and large the big European flagship airlines have very good, very solid terms of employment,” he said, adding that the low-fare end also pays its pilots very well. European conditions are considered better than those in the US.

“The lot of pilots in Ireland is very good,” he continued, added that there were opportunities for promotion and six-figure salaries were common.

“But there are also a lot of guys at the bottom end on zero-hour contracts,” says Cullen. “They may earn €3,000 or €4,000 a month during the summer but they would earn little or nothing during the winter, and they have that €130,000 training expense hanging over their heads.

“We would take the view that deregulation has been a positive thing for consumers and employees of aviation, however, it should not be used, and it is being used, to take away from aviation workers things that are taken for granted in other sectors of society, for example job security and direct contracts.”

Cullen is reluctant to encourage would-be pilots, particularly those intent on paying their own way. “Unless you are being offered a fully sponsored training regime with an airline or with the military, I would recommend against it.”