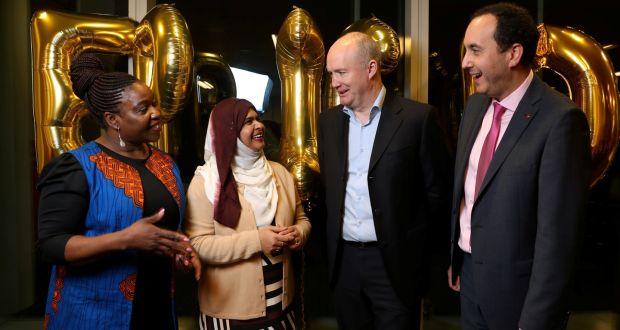 The State will lose out if businesses do not tap into the skills and experience that migrants can bring to the workplace, Virgin Media Ireland chief executive Tony Hanway has said.

“We have full employment in the country now, and let’s face it, there really is an amazing shortage of talent,” Mr Hanway said. “If we can’t fill the jobs in Ireland, then that economic activity is going to go somewhere else.”

Mr Hanway was speaking at an event hosted by Bank of Ireland to mark a decade of a Business in the Community Ireland (BITC) programme to help marginalised immigrants find paid work.

The Employment for People from Immigrant Communities (EPIC) scheme has supported 3,235 people from 105 countries over the past 10 years, with two-thirds going on into employment, training or further education.

“Having someone to guide you, it was powerful,” said Winifred Akinyemi, from Nigeria, one of the original participants a decade ago, who found housing and childcare as well as paid employment as a result of the scheme. “It was a light in the midst of darkness.”

She has since completed primary and post-primary degrees in international development and now works in the aid sector.

Afifa Rahman, who moved to Ireland from Bangladesh, said the scheme had helped her prepare a CV, while mentoring provided by KMPG had led to a job in the financial sector.

Originally designated “Stamp 3”, meaning she had no permission to work, she was five years in Ireland before she discovered the EPIC scheme. “I wish I had found it sooner,” she said.

The six-week programme covers pre-employment and employability skills, but also focuses on building up participants’ confidence and self-belief.

“Our job now is to make sure these programmes are as widely known as possible,” said Mr Hanway, a board member of BITC.

“The whole idea is to have an integrated approach and not leave the whole thing to chance. No one wants to see the people who come here get stuck in the system.”

The six-week programme, funded mainly by the Department of Justice and Equality and the European Social Fund, has the backing of recruitment company CPL, which has facilitated 1,350 mock interviews, and telecoms group BT, which has given IT training to 1,530 people. KMPG, Accenture, Enterprise Rent-a-Car and Bank of Ireland are also key supporters, as are organisations such as the Immigrant Council of Ireland and Cairde.

Some 43 per cent of all participants have gone on into employment, with 24 per cent proceeding to training, internships or volunteer roles.

BITC chief executive Tomás Sercovich said it was important that migrants who are highly qualified do not have to “go back to level zero” when they come here. “It’s great to see this diversity, but it has to be meaningful integration.”

The event was also attended by Minister of State David Stanton, who has responsibility for equality, immigration and integration, who said it was “encouraging” to see businesses getting involved.

Mr Stanton highlighted lower-than-average employment rates for migrants from sub-Saharan Africa, and said more should be done to improve this, while another challenge was to reduce the unemployment rate for migrant women.