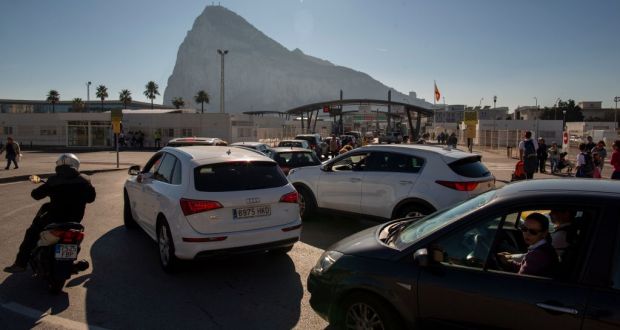 The border crossing between Spain and Gibraltar.

Twice a day thousands of people rush over the Spanish frontier under the shadow of the rock of Gibraltar: cleaners, architects, office staff for online gaming firms and parents holding their children’s hands.

These are cross-border workers, many of them fearful about how Brexit may change their lives, potentially in just a few weeks’ time.

For more than a year, UK-EU negotiations in the tortuous Brexit process have focused on the challenges of the border between Northern Ireland and the Republic of Ireland. But the frontier between Gibraltar and Spain is the other EU land border set to be transformed by Britain’s departure.

Fifty years after the British territory and the surrounding area were hit hard by a Spanish decision to close the border down, the region is again steeling itself for delays and possible shortages.

“Brexit is going to change so much – getting into Gibraltar, getting out, everything,” said Andrea, a Spanish cleaning lady. She was hurrying to cross the border from the neighbouring Spanish town of La Linea, which has 30 per cent unemployment, into wealthier Gibraltar, where, according to official figures, just 33 people are without work.

When tourists and other categories are included, there are an average of 28,500 daily border crossings into Gibraltar. Some 15,000 people travel into Gibraltar for work, taking up half the jobs in the territory. By comparison around 30,000 people a day cross the Irish border for work.

Unlike the UK, Gibraltar wants to continue the free movement of EU nationals after Brexit – even in a no-deal departure – but the disputed territory is worried that border hold-ups will make life more difficult.

The potential bottlenecks are clear. While the Irish border is 500km long with some 200 known crossing points, Gibraltar’s border is only 1.8km long and has one narrow crossing point.

If there is no Brexit deal, UK passports may need to be stamped and subjected to greater scrutiny by Spain - which has sought to regain sovereignty over Gibraltar since the territory was ceded to Britain in the 1713 Treaty of Utrecht, which settled the war of the Spanish succession. Non-EU products – notably perishable foods and pharmaceuticals – could be held up by checks.

In documents setting out the British government’s no-deal planning - known as “Operation Yellowhammer” released in September, the UK said of Gibraltar that people could face border delays of more than four hours. The documents also highlighted the risk of disruption to food and pharmaceutical supplies; and faulted the self-governing British overseas territory for supposedly inadequate preparation.

“It is a bit rich for those who are getting us into this mess to tell us that we are not ready to face the worst eventualities of what they told us would never materialise,” responded Fabian Picardo, Gibraltar’s chief minister, in comments clearly aimed at Boris Johnson’s Brexiter government.

Gibraltar was the most anti-Brexit region in the 2016 EU referendum, with 96 per cent voting to stay in the bloc.

Mr Picardo cited the territory’s experience of the 1969 closure of the border by Francisco Franco, then Spain’s dictator: oxygen supplies ran short in Gibraltar hospitals; his own grandmother could not say goodbye to her dying brother in the Spanish town of Algeciras just 15km away.

This time, Gibraltar is not expecting so dramatic a break.

Mr Picardo’s administration insists the Yellowhammer document is out of date, adding it has stockpiled so many medicines it has been told by the UK to stop. In case of pharmaceutical shortage, DHL aircraft that fly to the regional hub of Seville can be diverted to Gibraltar airport. At present almost all of the territory’s medicines come from the UK.

As for food, it says, only British imports into Gibraltar – which has never been part of the EU customs union or VAT system – should be affected. The flow of EU produce should be unchanged.

While perishable British goods will have to be inspected at a post at Algeciras, the Gibraltar government has organised a daily ferry to ship such produce from there.

“My biggest concern does not relate to the ability to import Bovril or Wiltshire ham,” Mr Picardo said. “I have absolutely no doubt that we will get all the provisions we need. We will get all the Panadol we need.”

Instead, the principal concern is people.

The Gibraltar government is assuming “a reasonable worst case” scenario of two hour delays for frontier workers – who at present are often simply waved through by the Spanish police – if there is a no-deal Brexit on October 31.

Among those daily migrants are more than 2,000 UK nationals such as Emily Watkins, who worries that her life will be made unmanageable if she has to wait for hours with her toddler son at the border every night.

“I’m a single mother and I can’t afford to rent an apartment in Gibraltar,” said Ms Watkins, who works for a diving company on the Rock. “My son needs to get his dinner and get to bed here in Spain.”

The vast majority of the frontier workers – more than 9,000 people – are Spanish. Employers such as Solomon Massias, who runs the Eroski supermarket franchise in Gibraltar, and John Isola, who operates bars and  restaurants say almost all of their hundreds ow workers are Spanish nationals.

Mr Massias suggests his workers can try to come into Gibraltar at non-peak times. But he said that Spanish authorities can “cause a five hour delay at the snap of a finger”, adding that such delays “would affect us terribly”.

Many people rushing across the border say they fear for their jobs if they cannot be on time. In a statement, the Spanish government said a no-deal Brexit would hurt Gibraltar but added it had been working for much of the last year to guarantee “Spanish interests and especially those of workers”.

Juan Franco, the mayor of La Linea, said his town’s economic ties with Gibraltar are so important that, when Franco closed the border, 30,000 to 40,000 people migrated elsewhere. The border was only fully reopened in 1985, less than a year before Spain joined the EU.

Now Mr Franco wants Madrid to invest in more border infrastructure to maintain the flow of goods and people after Brexit. He argued this would serve Spain’s campaign for sovereignty over Gibraltar better than simply applying pressure.

“If a neighbour from Gibraltar comes here, they find a city of high unemployment, low income and infrastructure problems,” he added. “The more intelligent policy would be to create a zone of prosperity in this region.”– Copyright The Financial Times Limited 2019