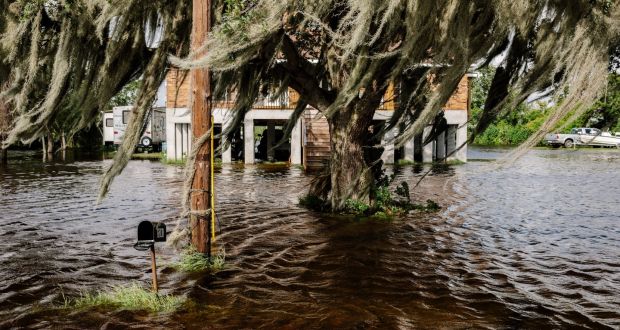 South Louisiana village Jean Lafitte: Steven Pinker is on firmer ground when charting the progress countries make as they grow richer and can afford to clean smog from their skies and start conserving, not plundering, nature. Photograph: William Widmer/The New York Times

That is the jump in book sales that the billionaire philanthropist can trigger when he tells the world about an author he admires. A five-year-old doorstopper more than 800 pages long rocketed up Amazon’s rankings last year after Gates tweeted it was “the most inspiring book I’ve ever read”.

The author was Harvard psychology professor Steven Pinker who claimed in his book, The Better Angels of our Nature, that so many types of violence had plunged that we may have entered the most peaceful time in human history, despite what’s on the news.

Gates has just doubled down to declare Prof Pinker’s new work, Enlightenment Now, his “new favourite book of all time”. “It’s like Better Angels on steroids,” he gushed in his blog, explaining how Pinker had moved on from violence to 15 other measures of progress to show how the world was getting better.

On the grounds that it never hurts to know what a man worth $91 billion thinks, I did my bit for a new Bill Gates bump and downloaded Enlightenment Now. As promised, it bulges with data showing how much healthier, safer, freer and richer we are than our forebears. Catastrophic famine has vanished from most of the world. War between countries is obsolescent. Most of us live in democracies. We’re even getting smarter, as global average IQ scores rise by about three points every decade.

Yet reading all this, I began to wonder how Prof Pinker would deal with one realm in which progress has been far more mixed: the environment. Over-fished seas filling with plastic are one thing, as is the decline of hundreds of species. Climate change is a very large other. What is the use of humans getting better in every way if they end up in a world that becomes unlivable as global temperatures rise?

Pinker makes a serious effort to fit these woes into his theme of progress but the result is strained and at times oddly hyperbolic. His chapter on the environment starts with an attack on “greenism” – a “quasi-religious ideology” he detects in the work of everyone from Al Gore to Pope Francis, that is suspicious of Enlightenment commitment to science and reason. The “apocalyptic” creed is “laced with misanthropy” in his view and prone to “Nazi-like comparisons of human beings to vermin, pathogens, and cancer”. For evidence of the latter, he cites a quote about “the human virus” from Paul Watson, neglecting to add that Watson is an anti-whaling activist so contentious even Greenpeace has criticised him.

Pinker is on firmer ground when charting the progress countries make as they grow richer and can afford to clean smog from their skies, rid rivers of poison and start conserving, not plundering, nature.

But climate change poses a larger problem. Pinker is eager to disparage the “tragic” view of modernity – that a carbon-powered industrial society could destroy itself. He concedes we cannot be complacent about global warming and agrees “humanity has never faced a problem like it”. The answer, he says, is to ditch “eco-pessimism” and embrace a more enlightened “ecomodernism”, because environmental problems are ultimately “solvable, given the right knowledge”.

For a start we should know that global carbon intensity, or emission per dollar of gross domestic product, has been declining. And it has. Indeed, global carbon emissions barely grew in 2016, when global gross domestic product growth was 3.1 per cent, meaning carbon intensity fell 2.6 per cent from the previous year, nearly double the annual average decline since 2000. But as PwC, a professional services group rarely accused of greenism, points out, that is less than half the 6.3 per cent fall countries need to achieve every single year up to 2100 to keep global warming well below 2 degrees, the main aim of the Paris Climate Accord.

Prof Pinker knows this. He thinks carbon pricing, nuclear power, geoengineering or other yet-to-be-invented technologies could eventually be the answer. I hope he is right. But to question how long this will take seems not so much pessimistic as perfectly reasonable and perhaps even positively enlightened.