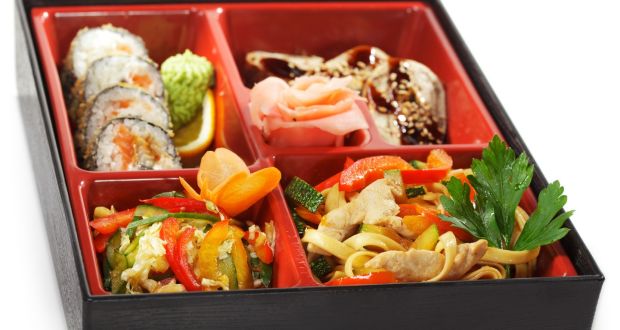 A bento box. An unidentified 64-year-old Kobe waterworks employee was fined thousands of yen and reprimanded after an investigation found that he had left the office to order a bento box before his lunch break on 26 occasions over a seven-month period, an official said.

For the want of a bento box, a Japanese worker who habitually left his desk three minutes before his lunch break has been docked half a day’s pay. The transgression prompted senior officials at the city waterworks department in Kobe to hold a news conference offering a public apology for the worker’s conduct. “It’s deeply regrettable that this misconduct took place. We’re sorry,” a bureau official said, as all the officials bowed deeply.

The unidentified 64-year-old employee was fined thousands of yen and reprimanded after an investigation found that he had left the office to order a bento box before his lunch break on 26 occasions over a seven-month period, an official said. The case caught the eye of social media users in a country known for its struggle with maintaining a healthy work-life balance. “It’s sheer madness. It’s crazy,” said one Twitter user. “Is this a bad joke? Does this mean we cannot even go to the bathroom?” said another.

Japan’s work culture can be brutally punishing, spawning cases like that of Miwa Sado, a young journalist at a public broadcaster who died of congestive heart failure after clocking 159 hours of overtime in one month. She was 31. Employees consider napping in public – or in the office – a badge of honour. It telegraphs a sign of diligence and commitment: You are working yourself to the bone. Public acknowledgment by officials and leaders of perceived wrongdoings is also expected in

Japan, where rail conductors will beg forgiveness when a train is even a minute late, or early. Such was the case in November, when the Metropolitan Intercity Railway Company in Tokyo apologised on its website because a train left a station in Chiba, a suburban prefecture, 20 seconds early. But the case of the waterworks employee calls into question the country’s efforts to address a rise in karoshi, or death from overwork.

In a 2016 government report on karoshi, nearly a quarter of companies surveyed said some employees were working more than 80 hours of overtime a month. In May, the Lower House of Parliament passed a bill to improve working conditions, setting equal pay for equal work by prohibiting unfair treatment of non-regular workers.

If approved, the bill would place a cap on overtime work, with penalties for violations: Annual overtime would be limited to 720 hours, with a monthly curb at fewer than 100 hours. But critics argue that some of the provisions would worsen the problem of excessive working hours: The bill would exempt highly skilled and highly paid workers since their salaries would be based on results, not hours worked.

Residents whose loved ones had died or had killed themselves were in the chamber, holding photos of the deceased, as the voting took place, according to local news outlets. The bill was sent to the Upper House. Gen Oka, who is in charge of personnel affairs of the waterworks bureau of Kobe City, said in an interview Friday that the employee had left his desk about three minutes or so 26 times between September, 2017 and March, 2018.

The employee, who is in charge of inventory control, told his supervisors that he went to a nearby restaurant to order a bento lunch because he needed a “change of pace.” But, the official said, “ordering lunch should be done during his lunch break, between noon and 1pm.”

The worker was caught when a senior colleague looked out of his office window and spotted him walking to get takeout food. Senior management calculated how much time he had spent away from his desk and docked him “thousands of yen as punishment,” Oka said, adding, “He said, ‘I’m sorry’ and “I will never do that again.’”

The official acknowledged that since making the announcement on June 15th, the department had received some blowback, with people calling or writing on its website to complain. “We received about 50 or 60 such opinions,” he said. But the department also got some support, he said, from people who said “we shouldn’t hire such a person who leaves the desk during working hours.” He defended the department’s decision, saying, “It is our obligation as public servants to devote ourselves to the work.”

On Twitter, the waterworks employee’s punishment drew puzzlement and criticism. “Leaving the desk for three minutes to order bento is not OK, while leaving for 15 minutes smoking is allowed? That’s strange. Kobe City should explain it,” one person wrote. “Honestly, who cares? This is an unprecedented apology news conference,” another social media user said, adding, “Is it much of a loss for the city that four managers hold a news conference like this?”

Another person said: “What about all the politicians who sleep in Parliament? They ought to be fired, then.