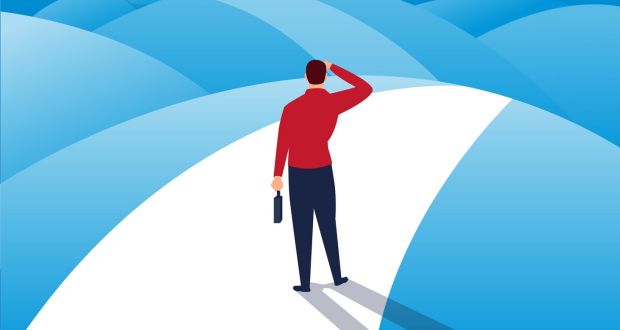 “Sometimes we can be our own worst enemy when it comes to changing jobs, and people are letting a variety of small factors get in the way of their happiness.” Illustration: iStock

For career-driven individuals, success is still about making it to the top, but not necessarily following the vertical route of previous generations. Today’s twenty- and thirtysomethings are not wedded to the notion of a job for life and this has shaped how they see their careers unfolding.

They have no appetite for waiting patiently for promotion and, because they expect to change job (if not career) up to six times during their working lives, they are prepared to up sticks faster than their more cautious elders.

Of course, money and better terms and conditions still entice individuals to change job, but there is another pressing reason: skills acquisition. With a working life of maybe 30 or 40 years stretching ahead of them in an environment poised for huge change, millennials and Generation Z need an eclectic mix of new skills on top of specific sectoral knowledge in their chosen field. The opportunity to acquire these skills is becoming a significant career driver, and companies that offer ongoing training coupled with clear personal, professional and leadership development pathways have the edge when it comes to attracting talent.

Michael O’Leary, founder of HRM, has been in the recruitment business for more than 30 years. “What we’re seeing in place of traditional staircase career development is executives choosing shorter permanent tenures and contract assignments because they want to build skills portfolios,” he says.

“We describe the change as a shift from being about career development ladders to being about personal growth in professional experience and toolkit. The former typically implies long tenure with one organisation (not necessarily a bad thing) towards a pattern of changing organisation to accelerate experience born from new challenges such as fast-moving technology and innovation. This can take the form of shorter permanent periods with a firm or by working as a professional contractor.

“Another example is that employee retention is now more driven by a company’s role and purpose and its impact on society compared with the traditional reason people stayed with a company which was a clear path of incremental steps up the career ladder.

“In the new scenario employees are extremely influential in the development of their experience and careers, and significant pivots are more likely to originate with the employee.”

Sharon McCooey is head of LinkedIn in Ireland and she agrees that one of the key trends emerging is a growing awareness of the need for lifelong learning and ongoing skills acquisition. This is turn translates into people wanting to work for organisations that actively support this.

“Training and learning opportunities are now very much part of the ask when it comes to the benefits package, and it’s not about going out on a training course once a year,” she says. “It’s about having developmental programmes within companies that are housed internally and run by their own learning and development teams. Learning is seen as an ongoing process for everybody to make sure people keep up to date with their skills.”

LinkedIn has its own training platform (having acquired online learning company Lynda for an estimated $1.5 billion in 2015), and its single most popular course here is Excel. Also popular are courses that give people a basic understanding of the burning topics of the day such as artificial intelligence, bitcoin and cryptocurrencies.

“It’s about people keeping themselves current and abreast of what they need to know for business and they want to dip in for 15 minutes and get it in bite-sized chunks,” says McCooey.

Also topping the most requested list were short courses on creativity, persuasion, collaboration and adaptability. So why creativity? According to LinkedIn it’s because, “while robots are great at optimising old ideas, organisations most need creative employees, who can conceive the solutions of tomorrow”.

But despite employees supposedly knowing exactly what they want, a significant number are still reluctant to move job or change role for a somewhat surprising reason – low self-confidence.

According to new research carried on for LinkedIn with 1,000 employees countrywide last November and December, a whopping 51 per cent of them admitted to not applying for a new job because of self-doubt. This survey was carried out as part of LinkedIn’s Jobstacles campaign to help Irish workers overcome the barriers holding them back in their career.

People gave multiple reasons for not applying for a new role, with 42 per cent saying they didn’t have good enough experience, 40 per cent assuming there were better candidates and 40 per cent admitting to feeling apprehensive about leaving the comfort zone of their current job.

Of those surveyed, a quarter were unhappy or uninspired by their current role but stayed because they liked the people they worked with. Asked about the reasons that would make them change job, money was a factor, as was a better work-life balance and feeling wanted – as in being headhunted for a role.

“Sometimes we can be our own worst enemy when it comes to changing jobs, and people are letting a variety of small factors get in the way of their happiness,” McCooey says. “There is no ‘one size fits all’ career, and people should take the time to talk to their friends and peers to get the inspiration they need to pursue a new job.”