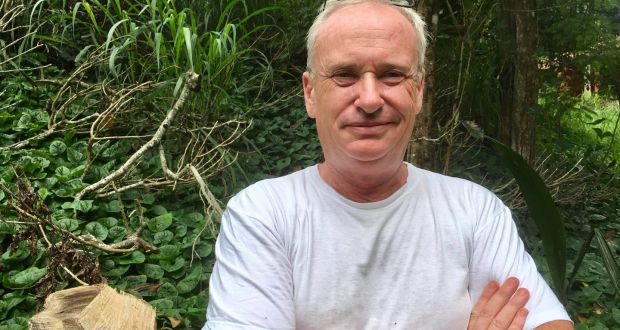 Cork mathematician Paul Soden: “I started taking courses in creating agroforestry systems, which can help vast areas that have been deforested grow themselves back and create water and food security.”

The journey from mathematician to regenerative agroforester outside Rio de Janeiro has been long and multifarious for Paul Soden, who first set foot in Brazil in 1998.

“I was running a risk management company, and did business in Brazil,” he says. “I guess I just fell in love with the place.” Since then he has been a coffee grower, farmer, tree surgeon and artisan food maker. Now he’s trying to help tribes people in the Amazon to grow their own food, and help them to reforest.

Originally from Cork, Soden graduated with a maths degree from UCC in 1991. Jobs at Citibank and Reuters in London and Dublin followed before he opened Delta Financial Systems.

“We had offices in Dublin, Bonn, Germany and Rio de Janeiro, where we analysed risk to companies after we were invited down by the federal government.”

In 2000, Soden discovered and bought a farm 2½ hours from Rio. “I decided to grow chilli peppers, which I have loved since childhood.”

He continued to work in IT consultancy until 2003, after which he imported fruits and coffee to Europe. A stint in Cork, where he opened a holistic medical clinic called Qlife Medical followed.

In 2009, however Soden and his Brazilian wife and growing family decided to settle on the now renamed Green Man farm.

“It was a step back, but one I embraced,” he says. “I started growing various products and selling them at local markets. I branched out making chilli sauces to soda bread and Cumberland sausages. I even won a food competition with a variation on my grandmother’s’ chicken liver paté recipe, using lemongrass and chillies.”

As he was living in the forests, Soden couldn’t help but get involved in agroforestry. “It’s a land use management system in which trees or shrubs are grown around or among crops or pastureland. It has varied benefits, including increased biodiversity and reduced erosion.”

“Unfortunately, the Atlantic Forest, where I live, and which stretches across South America’s east coast, has been reduced to just 7 per cent of its original size.”

Five years ago, there was a drought and Soden was thinking about how to protect water on a larger scale. Then he came in touch with Ernst Goetch, a Swiss scientist working in the area of subtropical agroforestry. “I started taking courses in creating agroforestry systems, which can help vast areas that have been deforested grow themselves back and create water and food security,” he says.

Soden says people are always appalled when they hear about deforestation, but unfortunately a lot of what we consume in Europe comes from the Amazon.

“We’re feeding this bonanza in the Amazon. Interestingly, a lot of vegan products come from here. It’s not sustainable.”

Upset by seeing Indians, who have been living in the Amazon for 20,000 years, being displaced to make room for water dams, soya bean plantations, and various huge scale European lead mining projects, Soden started advising tribal elders in the jurina tribe in the Xingu region of the Amazon, which has been hard hit by deforestation on regenerative agroforestry.

“Basically it means they can plant food forests and look after themselves, now that the forests no longer provide.

“Areas the size of Belgium have been levelled for foods coming to Europe,” he says. “Once you take the trees away, the Amazon becomes a horrible place to live. Hot, barren. It’s very sad.

“The native people have been displaced and moved into towns like Altamera, which has the highest crime rate in Brazil, because the people aren’t used to city life. So obviously I have to do something.”

Soden is also taking volunteers who wish to learn about this system and sends them on projects where they can be of real service. “I have also been co-operating with scientists in the field in various countries.”

Soden says life in Brazil’s forests is great, despite obvious disparities and rampant corruption. “You can eat fresh fruit from the garden, you get to hang out with the children and family, and you get to work on projects that have meaning. I’m surrounded by trees. The weather is wonderful, so I won’t be moving home anytime soon.”

As far as Irish people coming to Brazil is concerned, Soden advises people to come and observe first.

“Also learn the language before taking the plunge. From my experiences, qualified people do better here, so make sure you’re bringing something to the table that you need. Also talk to people who live here and listen to what they have to say.”

There are a lot of changes under way. “Obviously a lot of people are put off by the election of [president-elect] Bolsonaro, but the country has been extremely corrupt for the past 15 years particularly. The rainforests are already being destroyed at a rapid rate,” he adds.

“Nothing happens here without corrupt politicians having their fingers in it; even a humble farmers’ market, school bus or the tarmacadaming of a road. So I stopped going to food fairs, and we started developing everything in-house and are moving towards making everything self-sustainable, he says.

“But once you do your research, life in Brazil can be great. It’s got everything you need.”