Are filthy desks a cry for help or a dirty protest? 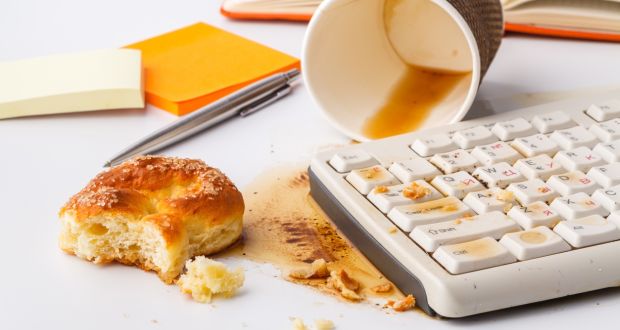 Slovenly work colleagues are a fact of office life.

Modern workplaces are full of employees who are urged to “bring their whole selves to work” and stay “authentic” when they get there.

The problem is that some staff have become a bit too authentic. They are so comfortable and relaxed, in fact, that they are bringing the parts of themselves to work that nobody else wants to see, hear or smell.

These are the people who cultivate piles of smelly Lycra under their desks, go in for public toenail clipping (yes, even in my office ) or reveal themselves to be Tupperware fetishists with rodent-baiting eating habits.

The only solace for anyone afflicted with filthy co-workers is hearing about other workplaces where things are far worse. This fully explains the viral popularity of a leaked internal memo sent by the chief operating officer of London’s Financial Conduct Authority, admonishing her 4,000 staff about the “shameful” state of the regulator’s new £60 million headquarters.

Georgina Philippou first listed some minor incidents. These include abuse of the communal food and drink facilities, such as “leaving cutlery and crockery in kitchen areas” – who among us can say we are not guilty of this offence?

She then segued into an escalating list of misdemeanours, from the baffling (“stealing plants”) right up to apparent dirty protests: “colleagues defecating on the floor in toilet cubicles on a particular floor, urinating on the floor in the men’s toilets and leaving alcohol bottles in sanitary bins”.

The FCA is not alone in facing faecal disrespect. Another exasperated boss sent an email last year that berated colleagues for “poo in the shower” at a London PR agency.

Why do people defile their workspace, especially in welcoming, shiny offices? Current management and leadership advice is often based around respect. If our interactions with colleagues and superiors are on an adult-to-adult basis, rather than the old-fashioned model of a shouty or micromanaging boss who infantilises staff, then we should (so the theory goes) be happier and more productive.

In a just world, then, staff who are happy and well-treated should not, for example, feel they have to smear snot on the walls of the cubicle (surprisingly common, it seems, even in ladies’ lavatories). Nor should they choose to eat their lunch on the toilet – a practice that is equal parts sad and disgusting – and then leave the detritus on the floor for everyone else to crunch over.

The fact that repellent things happen in all workplaces is to do with boundaries, according to Thomas Roulet, senior lecturer in organisation theory at Cambridge university’s Judge Business School. “People can be incredibly confused by the boundary between work and personal life, and this boundary is made more porous by two practices: working from home and living from work,” he says.

One unfortunate informant of mine is still scarred by his experience of sitting next to a man who “chucked his rubbish straight on the floor so that by the end of the day there was a pile of rubbish and tea bags just lying there and a big brown permanent stain on the carpet”.

This level of office filth might signal distress. Managers should perhaps deal with it tactfully, just as we would with a direct report who has body odour. Alternatively, watching someone drop their used tea bags on the floor might just be a very important sign that you need to demand to move desks immediately.

Getting away from unsavoury co-workers ought to be easy in the increasing number of workplaces where hot-desking or “agile” working is the norm. This is, in theory, a great idea. You can choose where you work. Unfortunately, the average employee spends two weeks a year looking for a place to sit, according to a British study last year.

And while leave-no-trace hotdesk policies are pleasing on the eye and handily frustrate the sorts of people who will turn any dedicated workspace into an actual rats’ nest, these innovations do not prevent germs.

Rates of sickness skyrocketed in a friend’s local authority workplace when they started to hot-desk and share grime and infection-laden keyboards. Mornings now start with a thorough antiseptic wipedown of the office furniture, Naomi Campbell-style.

One reader commented recently that they had spent time in many co-working spaces and in serviced offices and that “anonymity seems to breed absolute contempt that results in a muddy seat”. This insight gives WeWork a whole new meaning.

It is this lack of ownership or, in the case of conventional offices, a pervasive and old-fashioned “nanny state” vibe, that means some workers become carelessly, or even recklessly, filthy. They are, as Mr Roulet says, “way too comfortable, similar to the way a young child expects their parents to pick up after them at home”. – Copyright The Financial Times Limited 2019